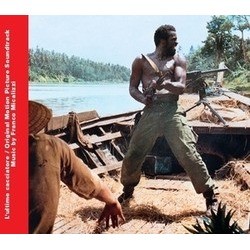 L'ULTIMO CACCIATORE (THE LAST HUNTER) was a 1980 production {meant to capitalize on the success of APOCOLYPSE NOW and THE DEER HUNTER} from acclaimed genre director Antonio Margheriti (WILD WILD PLANET, CASTLE OF BLOOD, THE VIRGIN OF NUREMBERG). Micalizzi brought to the project a sharp, dynamic edge predicated upon his own famous and seminal inventions for the violent Italian urban crime thrillers of the 1970's  the poliziotteschi. L'ULTIMO CACCIATORE is boldly animated by a series of uncompromising themes in the idioms of funk, jazz and R&B.

Micalizzi also uses his full orchestra to supply two dramatic song-forms, one of which, 'Shining Shadow', serves as the memorable end titles ballad while the second piece is a delightfully sexy, sleazy exercise in soulful fusion. Fleshing out this comprehensive CD (every note of the score is included) are numerous and highly addictive elements: synth-based suspense cues, instrumental lounge and pop source cues, and expansive, explosive action set-pieces such as one would expect from a blood-soaked Vietnam era war film.

Currently, and for the past several years, Maestro Micalizzi has been having great success touring Italy with his Big Bubbling Band as he conducts sold-out live performances of his 70's film music. L'ULTIMO CACCIATORE is a perfect example of why these concert venues are doing so well  Micalizzi wrote scores that exist to do one thing above all else: give pleasure!