The Wonderful Country / The King and Four Queens
The Deluxe Edition 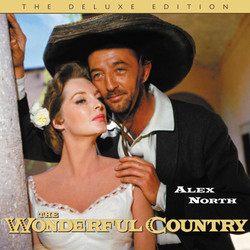 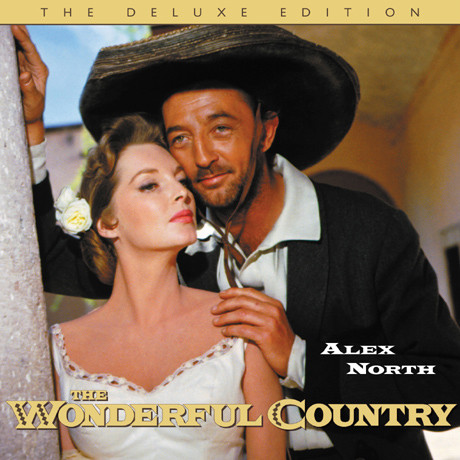 The Wonderful Country (1959)
Two western scores, as exceptional as any, ranking with the best and lacking only in fame (due to the relative obscurity of their respective films), are released together in Masters Film Musicís first double-CD set.

Robert Parrish's The Wonderful Country (1959) is the second of North's Mexico-set pictures, the first of course being Elia Kazan's 1952 Oscar-winning epic, Viva Zapata!, with its powerful and affecting score. The Wonderful Country stars Robert Mitchum as pistolero Martin Brady and singer-actress Julie London as Bradyís love interest Helen Colton. The story has Brady become involved in a gun smuggling operation between the warring Castro brothers (Governor Cipriano Castro and General Marcos Castro) in a saga that spans the mighty Rio Grande and ventures between Mexico and Texas.

The original soundtrack album for The Wonderful Country presented us with quite a puzzle: several cues are improperly named; the timings listed for each cue on the album cover can vary considerably from the actual length of the tracks as they appear on the LP; the 'End Title' that concludes the album is not only not the filmís end title, it isnít heard in the picture at all ó and while the orchestral score from which this music comes is indeed titled End Title, the recording begins in bar 25; and, most inexplicably of all, Alex Northís personal archive copy of the prepared album master contains four additional cues following the point where the released soundtrack album comes to an end ó this amounts to nearly fourteen minutes of music and represents the filmís entire finale, including the real End Title. What happened here is anyoneís guess, and there is no one who has lived to tell the tale. But, most importantly, we do present here the music that Alex North had selected to be released, for the very first time, in its entirety.

The King and Four Queens is one of director Raoul Walsh's last pictures, and also one of Clark Gable's final ones (The Misfits is that). Suave cowboy Dan Kehoe (Clark Gable) rides into a town where he hears about $100,000 in gold hidden on a ranch ruled by feisty old widow Ma McDade, where she lives with her four pretty daughters-in-law. Kehoe goes there in pursuit of the loot, which Ma's sons stole from a bank. She shoots him in the shoulder when he arrives, and grudgingly takes care of him. Determined to find the treasure Kehoe pretends to romance each of the four available widows, gets it, and leaves the ranch with the canniest one, Sabina.

Northís score, released here for the first time, is extraordinary. Ignited by a tremendously exciting and vigorous-beyond-words main title, much of the score is actually very touching and presents North in one of his most delicate and melodic modes. A wealth of truly beautiful themes and a roof-raising square dance cue make this release an absolute must for anyone who loves westerns and classic film music.

Both scores were drawn from Alex Northís personal archive tape collection and are presented in glorious mono.