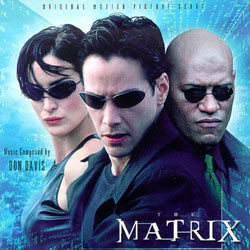 Nascondi le recensioni in altre lingue
The Matrix - 08/10 - Revisione del Tom Daish, presentato a 2010-09-11 08:41:55 (Inglese)
Don Davis is perhaps more widely know as a orchestrator and has orchestrated many scores for such big names as James Horner, Randy Newman and others. I've heard a few of his previous scores and I must admit that I was never overtly impressed. They were perfectly serviceable, but nothing special. However, the Matrix is a much improved effort and it is a extremely fortunate that Varese decided to release it since it's well worth hearing. The most striking thing about the score to the Matrix is the superb atmosphere that most of the music creates and the fascinating uses of ordinary orchestral instruments. The Main Title utilizes brass chords which fade in and out and while this is not necessarily a new thing, it makes an interesting change from the more traditional approach to scoring and orchestration. The scoring of the action sequences is remarkably fresh sounding and doesn't rely on Goldsmith or Zimmer style synths to propel everything along. In fact, running strings and Planet of the Apes style piano riffs are more prominent. The rumbling piano riff is something which James Horner uses quite frequently, perhaps showing that Davis has picked up a trick or two from his orchesrtating assignments. This is not to say there is a complete lack of synths in the score since they do form a good supporting role, but most of the more interesting musical effects are produced acoustically with skillful craftsmanship. The action slightly hints at more minimalistic tendancies, although this is far from pure Steve Reich or Philip Glass style minimalism. A brief hint of Joel McNeely's sputtering trumpet triplets from Soldier are evident in The Hotel Ambush and work very well in the tapestry of this score as well.

For all the good things about the Matrix, it is by no means perfect. There are a few somewhat mediocre passages where not a great deal happens and the lack of any strong themes means that even a quiet version of the main theme can't be relied on to liven these sections up. Tracks like Unable to Speak utilise chaotic out of control orchestral effects which work fine in context but aren't that great unless you're a fan of less compromising modernistic writing. However, with the relatively short running time, the less agreeable sections don't last long and in many ways add a much more decisive edge when compared to the much more listenable scores we're used to. Perhaps the score's biggest flaw is that the different ideas aren't put together as coherently as they might. Whereas Jerry Goldsmith would have moved from one idea to the next without breaking into a sweat, Davis occasionally darts from idea to idea which can give the score a somewhat fragmented feel. This is especially noticeable in the choral sections which, while sounding superb, don't last long enough and become a fraction frustrating since they could easily have been used for longer. Having seen the film, I do understand why this jumping about is evident. The action sequences jump from slow-mo to hyper active and back and so the rate of action varies so much it's impressive that Davis could keep up so well. I hope that Davis manages to get a few more scoring assignments, indeed this kind of sci-fi thriller seems to suit him and he has certainly provided the film with a great deal of its atmosphere, perfectly mirroring the techno, dark and faintly surreal world where the film exists. Not perfect by any means, but with so many good ideas, it's well worth picking up and certainly grows with each listen. Don't get it confused with the pop CD since they have virtually identical covers.... unless you like that sort of thing!
The Matrix - 07/10 - Revisione del Wilco de Jong, presentato a 2007-01-11 22:10:55 (Olandese)
Vlak na House on Haunted Hill begon Don Davis aan The Matrix. Van tevoren werd er aangekondigd dat Davis' muziek zeer vernieuwend zou gaan worden.
Kort en goed: vernieuwend is deze soundtrack slechts voor een klein deel. De griezelige en agressieve momenten, of ze nu een heel nummmer lang duren ("Unable to Speak") of wat korter (her en der in "The Power Plant"), het is vrijwel gelijk aan de atonale horror uit House on Haunted Hill. Sommige van deze stukken zijn zelfs te onplezierig om zomaar naar te gaan luisteren. Natuurlijk wordt filmmuziek niet in eerste instantie geschreven om prettig te zijn, maar juist om functioneel te zijn: emoties in de film te versterken. Functioneel is Davis' score zeker.

Voor Don Davis-fans een must, voor de rest... blijft het een gok.
The Matrix - 10/10 - Revisione del Andreas Lindahl, presentato a 2008-01-20 21:25:40 (Inglese)
The Matrix can probably be considered Don Davis' big breakthrough as a composer. His score for the widely succesful film, directed by the Wachowski brothers, starring Keanu Reeves and Laurence Fishburn, can be described with one word. Power. It's been a long time since I heard a score this powerful, dark and agressive.