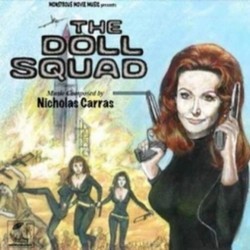 Rumored to be the inspiration for the TV series Charlie’s Angels, Ted Mikels’ 1973 sexy-girl spy adventure stars the delectable Francine York and a bevy of amply bosomed assistants. Nicholas Carras’ rousing underscore is over 50 minutes of great seventies action sounds, exotic island melodies, and all sorts of spy music, including an homage to James Bond. Although it’s an escapist yarn, the composer treated the movie as if it were serious business, which adds to the fun. If you're familiar with Carras' work via previous MMM releases, The Doll Squad offers a whole ‘nother approach from this very gifted composer. The original cover art is by the amazing Robert Aragon, and a 20-page booklet augments the release! These just might be the first soundtrack liner notes that discuss wardrobe changes as much as they do the music!