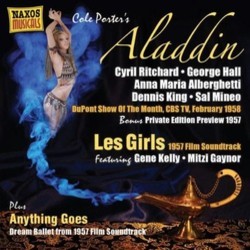 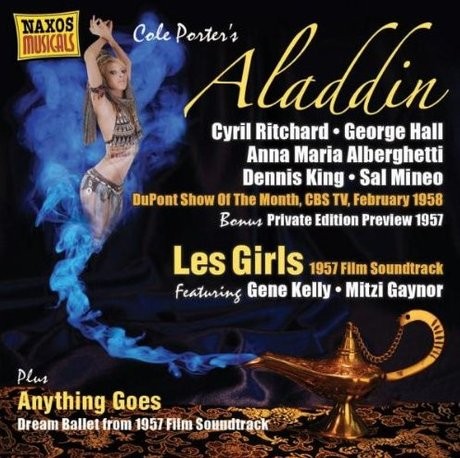 All credit to Naxos for being imaginative in their choice for this latest instalment in their public-domain Naxos Musicals series (not available in the USA for legal reasons). Aladdin (1958) was Cole Porter's final completed work and represents his attempt to write the score for a CBS television musical, a genre which was especially popular in the 1950s (Rodgers and Hammerstein's Cinderella comes to mind). One might expect that at the end of a career that included countless standards and hit musicals, Porter would know what he was doing, especially with an evocative, traditional story such as this.

But unfortunately, it's not even second-rate Porter. Most of the songs are barely efficient, and if this is what Porter's 'late style' was going to sound like, it's no wonder he stopped composing. The primary mistake, I believe, was the decision to approximate 'exotic' music in terms of melodic intervals and consecutive fifths in the harmonies. Perhaps Porter was attempting to follow in Richard Rodgers's footsteps in The King and I – indeed, I do believe that it was all deliberate and calculated, rather than a sign of the composer's medical ailments (including a bleeding ulcer in his pancreas) getting in the way of his creativity – but it just doesn't work much of the time. 'Come to the Supermarket (In Old Peking)' is hardly an inspiring title for a song, and its clichéd melody does nothing to redeem it; strangely, the melody for the next song, 'Make Way', is very similar, which doesn't help either song.

Nor do the performances help. With its chromatically-moving harmonies and luminous orchestration, 'Trust Your Destiny to Your Star' is one of the better songs, but Dennis King's pompous, dodgily-tuned rendition undermines the material. Meanwhile, George Hall is just plain silly as the Chamberlain and Emperor, though 'Wouldn't it be Fun' has its moments. Cyril Ritchard, at least, has wit, and his 'Opportunity Knocks But Once' seems more satirical and highly characterised than some of the others. Anna Maria Alberghetti's charming Princess also helps things out with her sweet performances of the title song and the love duet. One of the musical's problems is that Aladdin himself has only one number, so he isn't really depicted musically. Having said that, Sal Mineo is clearly not completely at ease even with that one ('I Adore You' – which is, in fact, a pretty enough song).

Naxos throws in some of the same bonus tracks that the piece had in its official CD release on Sony, specifically five songs from a private recording made in advance of the actual broadcast. The unidentified session singers do a very decent job – in fact, they're largely much more technically sound than their counterparts on the broadcast – so these tracks are very welcome. In all, though, Aladdin is acceptable as a curiosity, but if it were by a less renowned composer one doubts if it would have survived today.

I have more enthusiasm for Porter's penultimate work, the movie Les Girls (1957) which starred Gene Kelly, Mitzi Gaynor, Kay Kendall and Taina Elg (not Tania Elg as Richard Ouzounian has it in his liner note). The five songs included here give a glimpse into how good the composer was even when not working at the top of his game. The title song is conventional yet stylish enough, but thanks to its unusual melodic contours and harmonic darkness, 'Ca, c'est l'amour' really is top-drawer Porter. 'You're Just Too, Too!' is also very cute, and of interest for the dubbing of Kendall by Betty Wand, who also dubbed Leslie Caron's voice in the film of Gigi.

The disc ends with the dream ballet, based on 'Let's Do It' and 'All Through the Night', from the 1955 film version of Anything Goes. Again, this is interesting rather than riveting, which is my view of the whole CD. If you can't easily get your hands on the earlier Sony issue of Aladdin, this will be hugely welcome, but don't expect to hear the best of Porter's music.