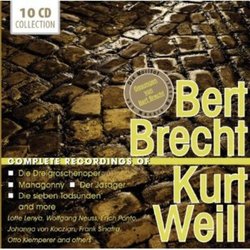 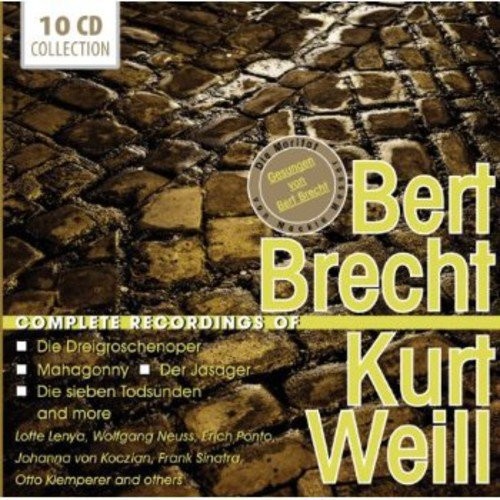 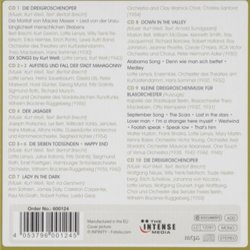 This 10-CD set presents a fascinating survey of music by the collaborating team of composer Kurt Weill and writer Berthold Brecht. Highlights of the set are Weill accompanying his wife Lotte Lenya at the piano in Six Songs, Brecht singing two pieces from 'The Threepenny Opera', Otto Klemperer conducting the 'Little Threepenny Music', and Frank Sinatra performing the wonderful 'September Song'. 'The Threepenny Opera' was first staged in 1928 in Berlin, and two years later the duo of Berthold Brecht and Kurt Weill caused a sensation with the premiere of 'The Rise and Fall of the City of Mahagonny', a piece which highlights violence, greed and exploitation and the economic conditions responsible for them. This box set contains two versions of 'The Threepenny Opera', one from 1930 with the same cast as the premiere and the other from 1958, both with the incomparable Lotte Lenya. Also included are legendary recordings of 'The Rise and Fall of the City of Mahagonny', 'Der Jasager', 'The Seven Deadly Sins' and 'Happy End', as well as the musicals 'Lady in the Dark' and 'Down in the Valley'. Artists include Wolfgang Neuss, Willy Trenck-Trebitsch, Erich Ponto, Mary Martin, Kenny Baker, Johanna von Koczian, the Lewis Ruth Band, the Theo Mackeben Orchestra, and Wilhelm Brückner-Rüggeberg.