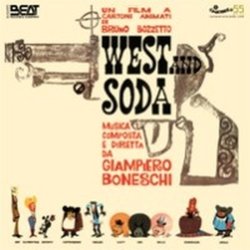 We close our double bill dedicated to the great Bruno Bozzetto with this little gem. West and Soda is an animated feature film westerns made in the study of the legendary Italian designer in 1966: a true gem, unique in its kind that combines the great tradition of Western Italo, the Italian flair in youth work and the talented musicians, especially trained in this area.

And it is one of these masters, Giampiero Boneschi, fine and prolific Italian musician, to make use of most performers in the form of time as the Cantori Moderni di Alessandroni and harmonica soloist Franco De Gemini.

A soundtrack orchestral intensity touching, with themes dominated by the full orchestra or simple poetic melodic rarefied that recall the memory the golden era of this kind cinematic-musical. The original Master which unfortunately was in poor condition has been restored with paternal care and professionalism by Claudio Fuiano, the surprising result! The original artwork supplied processed by Alessio Iannuzzi shows the characters of the cartoon and was approved by the same Studio Bozzetto. Production notes are by the music and film critic Andrea Morandi (CIAK Magazine). With the product, a hardcover that contains both CD dedicated to the cartoon by Bruno Bozzetto, VIP My Brother Superman and West and Soda, to make two albums together under the same sign on the shelves where you host your collection.