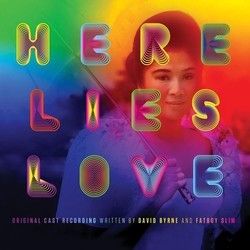 The cast recording of Here Lies Love features seven new songs written specifically for the musical including 'Child of the Philippines,' 'The Fabulous One,' based on Ninoy Aquino s famous speech 'A Pantheon for Imelda,' and 'God Draws Straight,' based on the book People Power: An Eyewitness History. Of the new songs written for the musical, Byrne says 'I was thrilled with the result I d been gently nudged by my collaborators to write something that I d never tried before.'

The physical copy of the recording includes an 80-page full color book with lyrics, credits, an introduction by Public Theater director Oskar Eustis and two essays about the creation of the piece by Byrne.