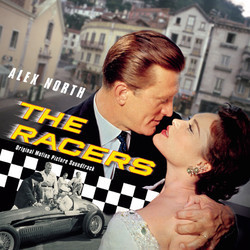 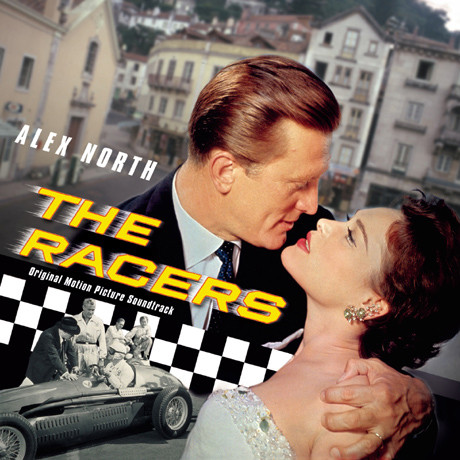 The release of any new Alex North CD is an event … but this disc is a doubly so. Not only does the latest release from Masters Film Music present the first-ever release of North’s 1955 score from The Racers, but, as a particularly special bonus, the disc offers the long-awaited world premiere release of North’s remarkable Daddy Long Legs ballet. In addition to the two works found on this CD, 1955 saw North compose the monumentally popular Unchained Melody, and pick up another Oscar nomination for his score for The Rose Tattoo. The Racers is an obscurity for even Alex North’s most ardent fans. Starring Kirk Douglas and directed by Henry Hathaway, The Racers featured Douglas as Gino Borgesa, a successful but reckless driver whose goal is to become champion of the European racing circuit. The score features celebratory and vigorous themes for the races themselves, the composer’s famous Monte Carlo (which had been recorded and included on North’s North of Hollywood album), and some brilliantly dark and dramatic music for once of the film’s most tragic sequences. One of the composer’s finest love themes is heard in a variety of incarnations, including a wonderful vocal, performed here by the legendary Peggy Lee. Daddy Longs Legs was, unlike The Racers, a very successful film for Twentieth Century Fox. The film was Fred Astaire’s one and only picture for the studio and also starred a very young Leslie Caron. That Alex North was a prolific ballet composer with credentials reaching far and wide (Martha Graham and Anna Sokolow being among his choreographers) has been somewhat overshadowed by the tremendous fame he achieved with his film scores. Nevertheless, Daddy Long Legs provided the perfect opportunity to bring his genius as a ballet composer to the much larger audience of moviegoers. For Daddy Long Legs, Alex North composed a ballet in three movements (Paris, Hong Kong and Rio), and an extraordinary work it is. Choreographed by Roland Petit, it is a spectacular and extravagant production. The stereo tapes for both scores weathered the years extremely well, but not entirely unscathed. Fortunately the damage was almost entirely confined to a little over a minute of The Racers. Unfortunately, that minute is the first half of the Main Title.