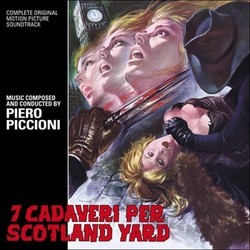 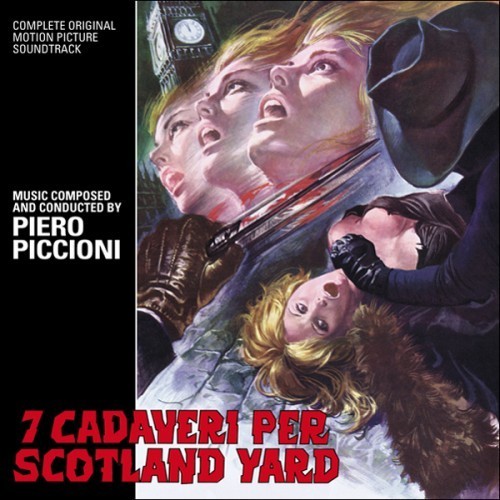 The story is a 20th century recreation of the Jack the Ripper myth with a deranged serial killer murdering beautiful women and harvesting their organs. Commissioner Henry Campbell is on the case, but he cannot seem to make up his mind about who is the likeliest suspect. Is it mysterious Pedro, a limping Spanish acrobat whose wife is among the victims? How about the dashing Professor Christian, an old school mate who is so actively helping the investigation by pointing out how guilty Pedro looks like? Starring Spanish horror legend Paul Naschy as the portly yet still athletic Pedro, 7 Murders for Scotland Yard contains valuable archival footage of the London Soho and a cool score by the incomparable Piero Piccioni!

Piccioni's score was previous released by Beat Records, but then the program only contained selected highlights and several cues that were created only for the soundtrack. This new CD contains over half an hour's worth of previous unreleased music, including great new variations on Piccioni's two memorable themes: the laid back bustling music for the pulse of London and the deranged serial killer music, partially inspired by the famous Medieval tune Dies Irae. Lavish package is rounded out with liner notes by Gergely Hubai, whose track-by-track analysis serve as a guidebook to the convoluted recording history of the score.