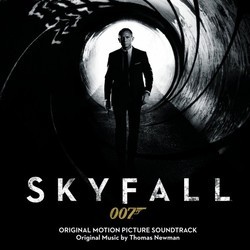 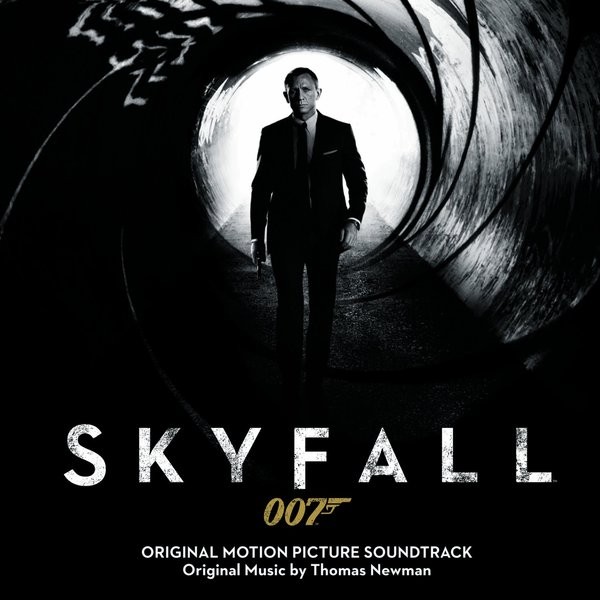 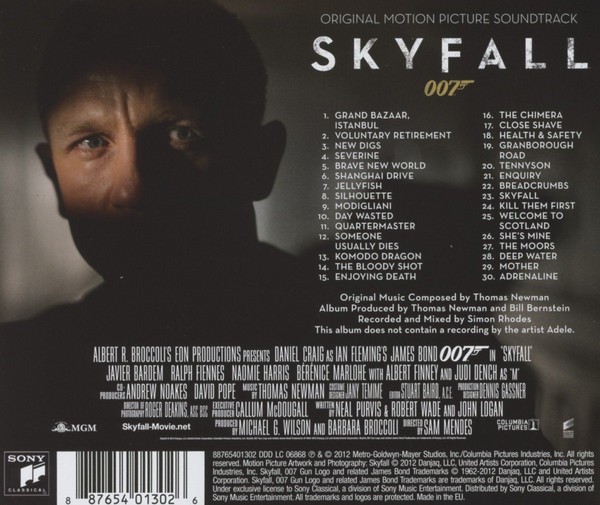 Skyfall - 08/10 - Review of John Mansell, submitted at 2012-10-28 19:09:00
Well John Barry proved that he could never be replaced when it came to Bond, that’s James Bond. Bond and Barry went together like Fish and Chips or better still suave and sophisticated. The latest Bond adventure has been a while in the works and it was a surprise to say the least when it was announced that American composer Thomas Newman would score the film. Newman of course is a seasoned film music Maestro and a member of the Newman dynasty that has reigned supreme in Hollywood for many years now. But how would he do scoring a movie that had a quintessential British hero and a character so well established as James Bond who we all know has also got an established soundtrack base. Well on the first listen to Newman’s score I was in a word “unimpressed” but after a few listens the music did begin to grow on me, I think one has to completely put out of your head the Barry scores and even the more recent soundtracks by composers such as Bill Conti, George Martin, Marvin Hamlish and David Arnold etc. After all a Bond film is an adventure a drama and a movie filled with more twists turns and bumps etc than any fairground ride. So one has to take this into account, Newman’s score is certainly dynamic and filled to the rafters with exciting and pulsating musical passages and cues. He does utilize the James Bond Theme within his score but does not overwork the composition, I suppose if he had not integrated the famous theme into the soundtrack that would have been sacrilege in the eyes of many. I did read a few comments about the score from critics; one said THIS IS NOT BOND MUSIC? So what is Bond music? Surely music for Bond can be anything as long as if fits the action or the scenario on screen and also contains something of a bombastic atmosphere. Many collectors did not like GOLDENEYE, but on listening to Eric Serra’s score now and also re-visiting the movie I am of the opinion that the music for that particular 007 outing worked rather well in the context of the film. It was different from what had gone before but it still retained a certain air of what Barry had produced in previous movies and this is what Newman has achieved here with SKYFALL, he has retained some of the stock Bond sounds but also has managed to imprint his own personal style and take upon the music for this super spy, thus creating a score that is effervescent, mildly menacing and brimming with suitably over the top moments which are a lot of fun.

Newman’s soundtrack is orchestral with some assistance from the synthetic section but both the symphonic and electronic fuse effortlessly and elements from the respective sources combine to create a fast paced and at times original sounding work.
Newman keeps up a relentless and high octane tempo for the majority of the work and these are laced with references to what many deem to be the sound of BOND. The composer however does manage to introduce some lesser frenzied and urgent moments and these do certainly evoke past moments from previous scores they ooze sophistication and are sexy and steamy in their make up with underlying sultry sounding strings that are luxurious and full of promise which act as a background to a scattering of piano that purveys an atmosphere of seduction. Newman I think has done a competent and worthy job of scoring SKYFALL, his score is certainly no clone of any of the Barry scores nor does it try and mirror any other composers work in this series, it is a modern take on BOND music and one that I think will be popular.
Skyfall - 06/10 - Review of Anthony Aguilar, submitted at 2012-12-10 14:54:40
When it was announced that Thomas Newman would be the composer putting pen to paper for the next Bond film, the film score community virtually erupted. Gone was David Arnold and his stylings and in came Thomas Newman. There was much trepidation and unease, Newman having never really tackled an action film of this magnitude before. Many thought that his unusual style, rhythms, and penchant for odd specialty instruments would not be suitable or compatible with a Bond film whose franchise's other scores were all relatively straightforward action scores. Not helping matters much was a youtube preview of the score which debuted a couple of weeks before Skyfall hit theaters, and which featured what turned out to be the most generic music on the album.

However, the film and score debuted and most let out a gasp when they heard Newman's score. If even at the very least, Newman has proven that he has the chops for scoring big action films. Many cues, specifically the opening, will likely get your blood pumping. He perfectly melds his own unique style with the action music Bond demands and it is extremely refreshing to hear. Unfortunately, the Bond theme is only quoted in parts and never in full. While it is fun looking for the little snippets of the bond theme hidden throughout the score, it is still slightly disappointing that it is never heard in its full glory (on album, at least).

The other good aspects of this score are 1) the theme for Severine, and 2)the flow of the album itself. Severine's theme is classic Newman, featuring his usual string washes with his odd chordal progressions that come together to form a theme that is unusually emotional and passionate. Unfortunately the theme is only quoted a maximum of 3 times in the score and is never allowed the time to really develop. The general flow of the album is a high mark as well. Newman has always excelled at ordering the cues for his albums for maximum listening pleasure and he has done just that here. The CD is quite long, but it never seems too long, even if there are certain cues which could have been cut.

Unfortunately, this score is never quite as dynamic nor exciting as previous Bond entries. There are other themes and motifs, to be sure, but none that are memorable enough after the disc has stopped playing. It truly is a shame, though, because while the album is never really boring, much of the underscore is still rather generic, typical Newman. This is truly unfortunate because while it is clear that Newman has action skills, the lack of memorable themes (save Severine's) or above-mediocre underscore really threatens to sink this score in the end. However, there are enough moments or pulse-pounding music littered throughout that the score never really falls too far down.

The pluses and minuses of this score all add up to what is a solidly middling effort in the Bond musical canon. Efficient, workman-like, and occasionally quite exciting, Skyfall has its moments and charms but these positives never fully overcome the weaknesses. Still, I look forward to hearing what Newman could compose for the next Bond film if he is hired back on. This score comes recommended with heavy reservations.
Trailer: