The Land Before Time 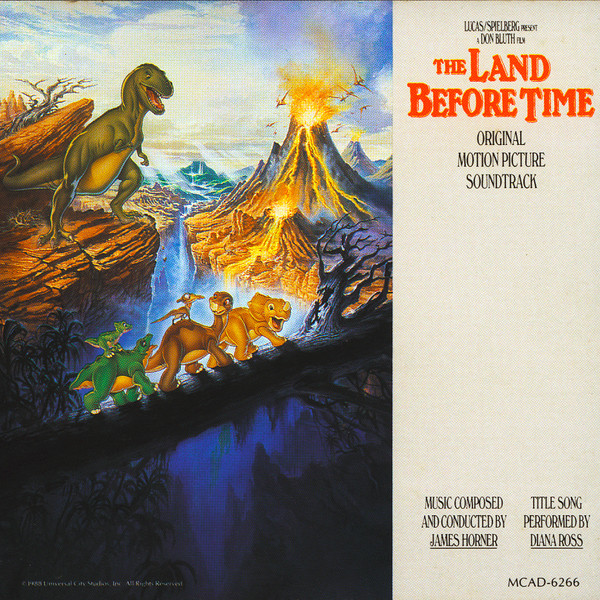 Show reviews in other languages
The Land Before Time - 10/10 - Review of Andreas Lindahl, submitted at 2008-01-20 21:25:40
Dinosaurs seem to bring out the best in composers. There's James Newton Howard's glorious score for Walt Disney's computer animated Dinosaur, John Williams' classic score for Spielberg's Jurassic Park (and to some degree The Lost World). And then there is James Horner's wonderful music for The Land Before Time.

Composed in 1988 this score was written around the same time as Willow and although the films are completely different the scores are somewhat related when it comes to style, albeit the music for Willow is far more dark and agressive. Parallells can especially be found in the action music, which in both scores is very expansive, grand and powerful. But while Willow above all is dominated by (sometimes extremely dissonant and difficult) action, the score for The Land Before Time is more lush, emotional and beautiful. And melodic.

Performed by the excellent London Symphony Orchestra and The King's College Choir, The Land Before Time is James Horner's largest score for an animated film. And it is also his best so far, with the opening cue, "The Great Migration", being one of the most effective and best pieces the composer has ever written. With the gorgeous French horn solo opening the cue, and the score, and the lush, beautiful writing for choir and orchestra, these six minutes are worth the prize of the disc alone.

I remember seeing this film as a kid and crying my eyes out and although I didn't realised it back then - this was years before I even started to notice music in films - this was mostly thanks to James Horner's emotional score. Goofy, cartoonish music is pretty much absent in this score, which is one of the reasons I enjoy it as much as I do. "Whispering Winds" contains some of the best emotional and sad music of Horner's career. There is, for instance, a simply wonderful rendition of the scores' main theme about six minutes into the cue, performed by soft childrens' choir.

This theme also forms the base of the films' only song, "If We Hold on Together". Performed by Diana Ross, this is one of the better Horner songs out there, although it, like most of Horner's songs, has a tendency to get a little too schmaltzy at times. But it's mostly very sweet and lovely.

The Land Before Time is a score that belong in every film music collection. You're not a real Horner fan if you don't own this soundtrack. It's right up there in the top ten list of scores for animated films and in the top five list of Horner scores.
The Land Before Time - 10/10 - Review of Tom Daish, submitted at 2010-09-26 19:47:18
Although there are only six score cues, they are all so long as to provide a lengthy album. Surprisingly, there is only one song and that's the one sung by Diana Ross. It falls squarely in the style of other James Horner songs such as Somewhere Out There from An American Tail. As usual, the orchestral backing is exemplary, Horner seems to have a great knack for providing just the right orchestral accompaniment for songs. For an animated outing, much of the score is surprisingly restrained, in fact some sections barely register. However, they don't quite fall into the kind of Deep Impact dullness where the music just seems like padding. There are some more bouncy tunes, the main one being introduced in the opening track. This effectively sets the tone for the score, broad and expensive with interjections of fun every so often.

The second track is similar in tone to the opening number for about the first half, but then erupts into an exciting and dynamic action cue that brings back fond memories of Willow, although thankfully without the sakuhatchi to spoil it. More action interjects in The Rescue and although similar to other Horner action, is interesting enough on its own to pull it off. The other tracks are much slower. Whispering Winds is an especially delicate track that will no doubt send some people to sleep, but it is quite beautiful and the addition of the main theme (from If We Hold On Together) means that for me, it never gets dull. Also a brief and delightful scherzo that appears halfway through makes it well worth sticking through the laid back opening. The End Credits start with a typical flourish of strings (much like An America Tail and several other James Horner scores!). It then moves into territory more like that which predominates the rest of the score, but builds into a thrilling brass statement of the main theme before subduing for a more restrained ending. All in all, an excellent score with some absolutely delightful moments, a lovely song and a very well produced disc.
The Land Before Time - 09/10 - Review of Michael Burke, submitted at 2010-01-08 05:05:10
I put this on for my 5-year old and immediately knew it was the work of a top Hollywood film composer. At first I was scratching my head. Goldsmith? Rosenman? Perhaps Elmer Bernstein? Then I heard something that reminded me of Star Trek III: "The Search For Spock" and I guessed it was James Horner, but I had to be sure.