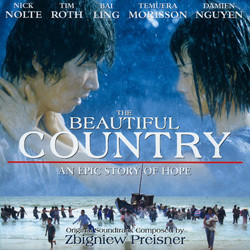 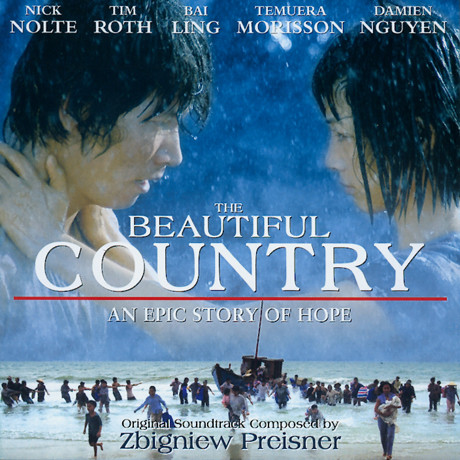 The Beautiful Country - 08/10 - Review of Tom Daish, submitted at 2010-10-08 22:11:49 en
Thinking that it seemed a long time since I last acquired a soundtrack composed by Zbigniew Preisner, I had a look through my old reviews to see what the last work by him on which I had commented. Much to my surprise, the only entry for the composer is actually for his concert work Requiem for My Friend, a striking blend of gregorian chant and the more typically symphonic. Preisner's best known film works are for the Trois Couleurs trilogy, but also The Double Life of Veronique and, in a rare excursion into the mainstream, The Secret Garden (albeit a film with a Polish director). The Beautiful Country tells of a young man's search for his mother - in Saigon - and father - in America - as he escapes from an impoverished life in Viet Nam years after America's most ill-advised invasion. Although featuring a cast of largely Vietnamese actors, the film also stars Nick Nolte in a glorified cameo, presumably as a way to tempt those unused to 'foreign' films into the arthouse cinema.

Being set in a 'Beautiful Country' the images in the liner notes are unsurprisingly gorgeous and the same can be said for Preisner's equally superb score. Despite the press notes proclaiming it as an epic film, the score is really quite intimate, but an effective blend of lush orchestration and poignant drama. The main theme, introduced in the titular opening cue, mixes small melodic movements, with almost Georges Delerue style string writing, with fragments of near silence. Either due to the acoustics of the recording venue, or as a later mixing choice, the reverb of the strings during the pauses ensures that there is never complete silence and prevents the music becoming stilted. That, combined with the way that Preisner paces these musical commas allows for a mood that is plaintive, rather than bathetic, as might have resulted from such otherwise rich string writing.

Naturally, some regional modes and instrumentation are incorporated, but these are melded seamlessly with the orchestra and never feel like an intrusion. Indeed, Preisner even manages a little light jazz, but again this merges effectively with the other material. However, the most affecting are those where only a small ensemble is employed (the soloists thoughtfully listed in the liner notes). The Beautiful Country is another fine entry in the sub-genre of Asian flavoured scores such as the Danna Brothers' Green Dragon and Conrad Pope's Pavilion of Women, albeit much less grandiose than the latter. Anyone expecting something with the sweep of Pope's superb, if underrated score, will perhaps be disappointed as The Beautiful Country is fairly low key, if only because Preisner's writing is of great gentility and not bombastic drama. The fine notes include comments about the film, its director and composer, capping off a superb release.