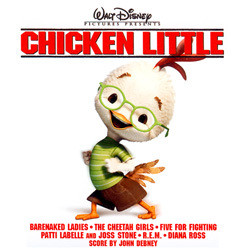 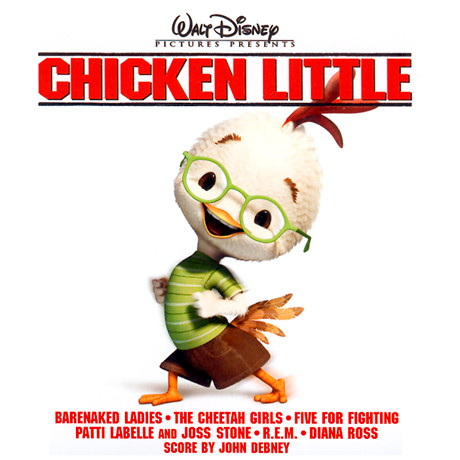 Show reviews in other languages
Chicken Little - 06/10 - Review of Tom Daish, submitted at 2010-09-11 08:47:31
Rather than leading the game, these days Disney seem to just follow the field. Having abandoned traditional 2D animation, they have their own CG division and Chicken Little is their first effort (Pixar films are only distributed by Disney, despite what they might want you to think). Depressingly, it has garnered reviews not entirely dissimilar to their last few hand drawn efforts, citing the usual problems of predictability, a sappy message and surprisingly variable animation. The production design looks especially unappealing and, for 2005, the animation is nothing special. Compared to the beautiful images of Finding Nemo or the eye popping cityscapes of Robots, Chicken Little looks pretty uninspiring.
Another area in which Disney have taken a lead from their competitors is in the use of popular songs, but to their credit, the selection here has at least a couple of credible entries. The Barenaked Ladies are always good fun (even if the cut here isn't one of their best) and how many kids films do you know that feature R.E.M.? Nope, I can't either. Stir It Up and Shake a Tail Feather are at the cheesy pop end of the spectrum, but give me enjoyable fluff over sappy ballads any day; harmless fun. The three covers featuring members of the cast - the Spice Girls' dreadful Wannabe, Queen's classic We Are the Champions and Don't Go Breaking My Heart - are tolerable, but the kind of tracks that become wearisome over time. Unfortunately for film score fans, Disney have once again short changed the composer and only 15 minutes of John Debney's delightful score are featured.

The first three longer tracks are also the longest and most engaging; The Sky is Falling is surprisingly apocalyptic, with doom mongering choir, mixed with a little comedy theremin. The Big Game is energetic piece, moving from stirring (with more than a hint of David Arnold's Independence Day) to playful Bernstein, Newman, Broughton style rambunctious wild western in the middle and a rousing conclusion that sounds like the finale to every sports movie ever made, but no less enjoyable for all that. Chase to the Cornfield is a curious mixture of modern digital percussion, a little more threatening choral writing and some energetic brass licks; an odd combination, but one that works supremely well and demonstrates a composer of more imagination than many of his other scores do. The three final tracks are brief, but continue the playful tone, with the exception of Driving with Dad which closes the album in gently sentimental mood.

Likely due to the brevity of the selection, none of the melodies that Debney throws out seem to establish themselves as they might. Disappointing as there are some rather good tunes in there and more time to get into them would seem welcome. My cynical nature is inclined to suggest that maybe 15 minutes is sufficient and the rest is more of the same, but I don't intend to watch the film to find out. Given the short shrift of Debney's contribution, difficult to wholeheartedly recommend to the film music fan, enjoyable though his music is. However, take comfort in the knowledge that Disney scores usually turn up in the sale after massive oversupply so a cheap copy might not be so difficult to find once the film has been forgotten (which probably won't take long).

Other releases of Chicken Little (2005):