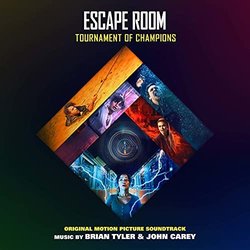 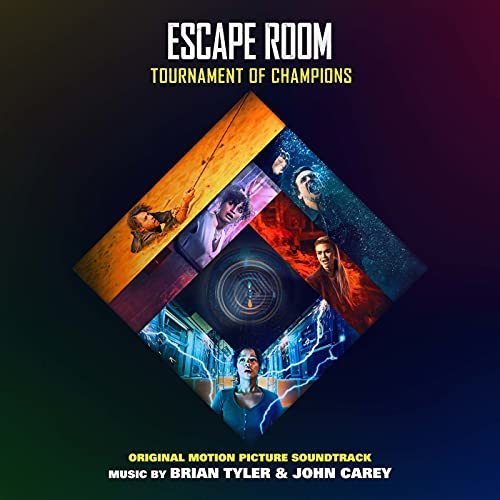 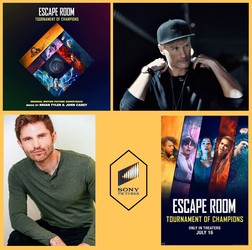 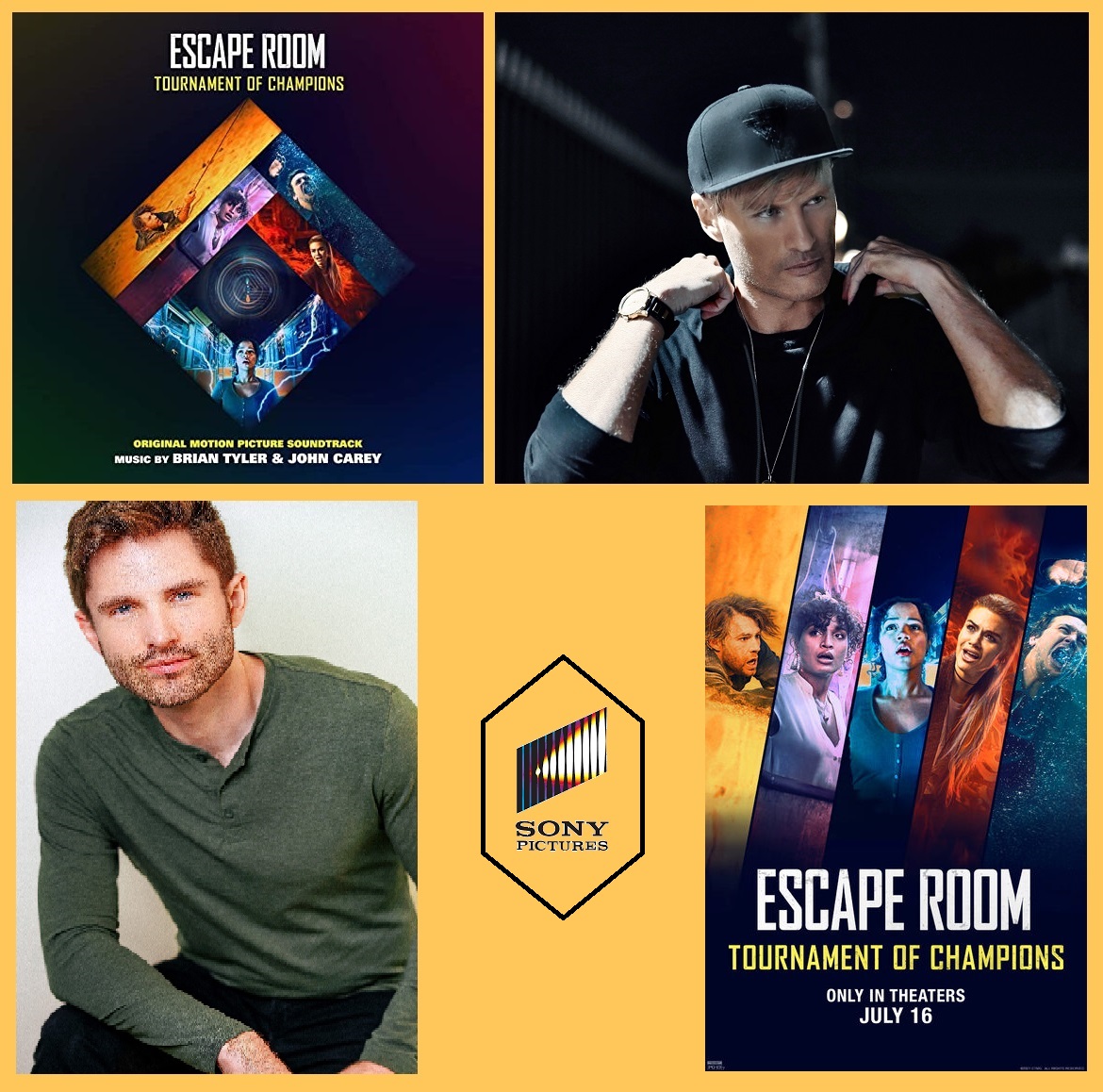 Of the soundtrack, composer Brian Tyler says, Composing the score for Escape Room: Tournament of Champions was an incredible experience and a chance to create both an emotional musical experience as well as a dark and sonically rich soundscape. The score is composed from the perspective of classic thematic writing yet is embodied by industrial electronic music.
The contrast of tones between emotional motifs and the stark sonic landscape of pure electronic music was one of the most interesting musical combinations I have ever endeavored to create. I was so pleased to work with the incredibly talented director Adam Robitel on this sequel as well as collaborating with the amazing John Carey. The film was a true joy to work on, and I cannot wait for people to see the film and hear the soundtrack!

Fans of the original Escape Room will hear a familiar yet updated version of the 2019 films main theme, which Tyler and Carey have newly reprised for the sequel, of which Tyler says, it conveys a fatalistic tone, but this time, the story has a whole new set of circumstances, and the score has an expansion of musical themes and sounds.
The contrast of the distant, melancholic piano against the wall of powerful analog synthesizer develops throughout the film, and we feel more and more emotion for the main characters who helplessly fight against that invisible force.
 Also included within the 21-track album is a special version of the new theme, which has been remixed by Tyler and frequent collaborator, DJ and producer Kill the Noise for the films main title sequence. Of the collaboration, Tyler says, I was also proud to collaborate once again with Kill the Noise to remix the main theme for the main title sequence. This time the theme gets the drum and bass treatment and will hopefully break some speaker cones.

Escape Room: Tournament of Champions is the sequel to the box office hit psychological thriller that terrified audiences around the world. In this installment, six people unwittingly find themselves locked in another series of escape rooms, slowly uncovering what they have in common to surviveand discovering theyve all played the game before.

About Brian Tyler:
Brian Tyler is a multiple BAFTA and Emmy Award® nominee and has been a composer and conductor on over 70 feature films. Tylers scoring credits include Joss Whedons Avengers: Age of Ultron, James Wans Furious 7 and F. Gary Grays Fate of the Furious as well as others in the Fast and the Furious franchise, Shane Blacks Iron Man 3, Alan Taylors Thor: The Dark World, Jon Chus Crazy Rich Asians, for which he was voted to the 2019 Oscar shortlist for Best Original Score, James Vanderbilts Truth, which stars Cate Blanchett and Robert Redford, Justin Baldonis Five Feet Apart, Louis Leterriers Now You See Me and Jon Chus Now You See Me 2, Adam Shankmans What Men Want, Ready or Not directed by Matt Bettinelli-Olpin and Tyler Gillett, Charlies Angels directed by Elizabeth Banks, Clouds directed by Justin Baldoni, Taylor Sheridans Those Who Wish Me Dead, F9 directed by Justin Lin, and the upcoming Escape Room: Tournament of Champions directed by Adam Robitel which opens on July 16, 2021 and Redeeming Love directed by DJ Caruso. Alongside Brians future films, he is in the process of launching his ambitious project Are We Dreaming, a completely immersive audiovisual experience.
Tyler began scoring features shortly after completing his Masters Degree from Harvard University as well as receiving his Bachelors Degree from UCLA. Some of his earlier projects allowed him to collaborate with Bill Paxton (Frailty and The Greatest Game Ever Played) and William Friedkin (The Hunted and Bug). Tyler is a frequent collaborator with director/star Sylvester Stallone, having scored all three of The Expendables films as well as 2007s Rambo and Rambo: Last Blood.
Tylers film work also led to arranging and conducting the logo music for Universal Pictures and Marvel Studios. In addition, he composed the themes for the NFL on ESPN, the nationally televised U.S. Open Championships, and Formula 1. Tyler has composed the music for the television series Hawaii Five-O, Scorpion, Magnum PI and Taylor Sheridans Yellowstone starring Kevin Costner. He has received Emmy nominations for Last Call, Sleepy Hollow and Transformers: Prime.
Tyler is a multi-instrumentalist skilled at playing piano, guitar, drums, bass, cello, world percussion, guitarviol, charango and bouzouki, among others. He also performs electronic music under the moniker Madsonik.
Brian Tyler has conducted symphonic concerts of his movies around the globe and frequently conducts the London Philharmonic, the Philharmonia Orchestra of London, and the Hollywood Studio Symphony. His honors include 32 BMI Music Awards, 3 Emmy® nominations, 5 ASCAP Music Awards, and 12 Goldspirit Awards including Composer of the Year. Tyler was also named Film Composer of the Year at the 2014 Cue Awards.

About John Carey:
John Carey is a composer for film and television with a diverse body of work from documentaries to episodic TV to blockbuster studio films. His recent films include culinary documentary A Taste of Sky, directed by Michael Yuchen Lei, the political documentary Ready for War, directed by Andrew Renzi, and the boxing documentary They Fight, also directed by Andrew Renzi.
Carey has been a part of Brian Tyler's music team as an arranger for many years, lending his talents on films like Avengers: Age of Ultron, Teenage Mutant Ninja Turtles, The Fast and the Furious franchise, The Mummy, Rambo: Last Blood, Charlie's Angels, and Crazy Rich Asians. He was also an arranger for composer Keith Power for the CBS shows Hawaii Five-O and Macgyver, spanning 7 seasons of network television.
Carey received his BM in music composition from Capital University and graduated from the world renown Scoring for Motion Pictures and Television program from the University of Southern California. In 2016, he was selected as a participant in the prestigious ASCAP film scoring workshop where he worked with and learned from some of the best composers and recording musicians in the film industry. In addition to his background in scoring, he is an electronic music producer and a former metal guitar player.