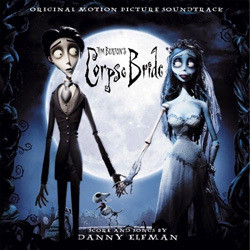 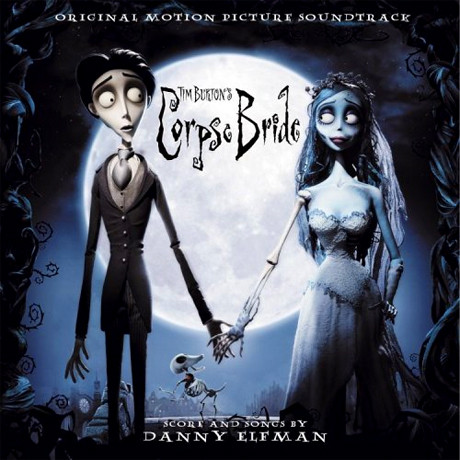 Show reviews in other languages
Corpse Bride - 07/10 - Review of Tom Daish, submitted at 2010-09-10 23:38:36
You wait years for a stop motion animation and then two turn up at once. However, unlike the cosy charm of Nick Park's plasticine heroes, Tim Burton's world is a rather more macabre and the animation a little more finessed, however, for my money, Corpse Bride is all beautiful images, but otherwise rather uninvolving and surprisingly witless. Naturally, along for the ride is Danny Elfman who contributes four songs (and vocals on one) along with usual underscoring duties. It seems curious that some reviewers have taken such exception to Corpse Bride being somewhat predictable Elfman and yet seemed thrilled by Rachel Portman's positively uninspired Oliver Twist. I can't help but think that Elfman sometimes gets a raw deal; his style is certainly strong, but he bends it impressively in each score. True, Corpse Bride isn't his most original work and contains many familiar licks, but there is still plenty to enjoy.
Naturally, the precedent is The Nightmare Before Christmas, one of Elfman's finest, but Corpse Bride is generally more sombre in tone and the score is similarly more subdued. What is certainly in plentiful supply is the Elfman of five or ten years ago; moments evoke Nightmare, but also hints of Edward Scissorhands and others. Those who find his 21st century writing a little hard to take will certainly enjoy him rolling back the clock, stylistically. Unlike Nightmare's plentiful songs, there are only four here, two rather dour and two quite lively, and each mood has one intimate and one ensemble. According to Plan sets out the wedding of Victor to Victoria as told by their ghastly parents and is a fine, if not quite dazzling entry point. Remains of the Day is the one intentionally jazzy and wacky number, performed by Elfman, but somewhat lacking in cohesion and rather disconnected with the sobriety elsewhere. Tears to Shed is poignant and quite lovely, while The Wedding Song is a witty Gilbert and Sullivan pastiche, with some terrific ensemble writing and a grand conclusion.

The score makes only fleeting references to the songs, namely Tears to Shed which is extremely effective, but used sparingly. The score-only melodies are not, it must be said, some of Elfman's most striking creations and a lot of the instrumental passages pass by a little anonymously. Of course, he is too good a composer to let the time pass fruitlessly, but only a few stick out as memorable highlights. Into the Forest is a surprisingly terrifying piece of gothic horror, in the Sleepy Hollow vein, and the tension superbly well wrought with some dizzying orchestration. At the other end of the spectrum are the piano solos; firstly Victor's, clearly inspired by Beethoven's Moonlight Sonata and, later, The Piano Duet which is a lovely interlude before a little of the jazzy exuberance of Remains of the Day cuts in during New Arrival, the only upbeat cue before the finale.

Elfman's finales are always worth cherishing, although that for Corpse Bride is, perhaps unsurprisingly, a little more subdued, but the way it broadens out is like a well deserved musical exhalation after the intensity, intimate or otherwise, of the rest. The End Credits are a typically well conceived summary of the major melodies containing an amusingly straight laced snippet of Remains of the Day. Four bonus tracks from the underworld's liveliest bar, featuring Bonejangles (Elfman's character performing Remains of the Day) and his Bone Boys conclude the album, evidently deemed too uproarious to feature in the main body of the album and a nice bit of fun to end. One almost wishes that Burton had made a slightly more extrovert film since when let loose, Elfman's writing is hugely engaging and memorable. This is almost to Nightmare what Batman Returns was to the original; clearly from the same musical gene pool, but rather lacking some of the things that made the first time through a classic (and in this case, add in lyrics that seem somehow less inspired). Enchanting, if not quite magical, but still worthy of investigation.
Corpse Bride - 08/10 - Review of Andreas Lindahl, submitted at 2008-01-20 21:25:40
Danny Elfman's music for The Nightmare Before Christmas, from 1993, is one of the composer's most popular scores ever, and one of the most read reviews here at scorereviews.com. So it's understandable that expectations on Tim Burton's Corpse Bride, and the accompanying score and songs by Elfman, have been unusually high.

And comparisons to The Nightmare Before Christmas are unavoidable, of course - two stop motion films by Tim Burton, with music provided by Elfman. However, the two scores are not that similar, with Corpse Bride being much more gentle and fairy tale sounding than the Jack Skellington score. Still, they share a common jazz element at times, with lots of swing and big band influences, as well as certain similarities orchestration wise.

Like the recent Charlie and the Chocolate Factory, Corpse Bride is Danny Elfman in fairy tale mode. Sweet woodwinds, pizzicato strings, choir and glockenspiel dominate the orchestral palette, with harpsichord and dark brass giving the music a quirky and effective gothic twist at times. The main theme is a bitter-sweet, lyrical melody, which is bound to get stuck in your mind. But don't fret - it's a beautiful theme, which permeates the entire score, cropping up in a large number of cues. Its appearances in tracks like "Moon Dance", "Victor's Deception" and the magical "The Finale" are simply wonderful. This theme also forms the basis of the two lovely piano pieces - "Victor's Piano Solo" and "The Piano Duet" - included on the album.

The jazzy swing elements evoke Peter McConnell's excellent score for LucasArts' computer game Grim Fandango. It's film noir music at its best. The far too short "New Arrival" is a terrific swing piece and four bonus tracks, from Bonejangles and his Bone Boys, end the soundtrack album, with a jazzy, instrumental lounge version of "Remains of the Day" and other lounge music.

"Remains of the Day" is the title of one of the four songs Elfman penned for the film and it is easily the best. Performed by hep cat - and skeleton - Bonejangles (voice provided by Danny Elfman himself - in Jack Skellington style) and his Bone Boys, this is a great swing tune, which oozes with 1930's jazz, packed with sultry trumpet, saxophone and xylophone - the latter providing the necessary, and effective, bone sound, of course. "According to Plan" is similar to the big ensemble number "Making Christmas" from The Nightmare Before Christmas, in that its purpose is to bring the story forward as a "preparation montage." "Tears to Shed" is the weakest of the four songs (except for Enn Reitel, as Maggot, whose voice is slightly bizarre and therefore quite entertaining), reminiscent of Sally's songs from The Nightmare Before Christmas, while "The Wedding Song" is a large, upbeat ensemble piece in the style of Gilbert and Sullivan.