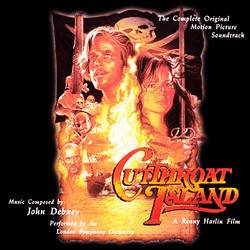 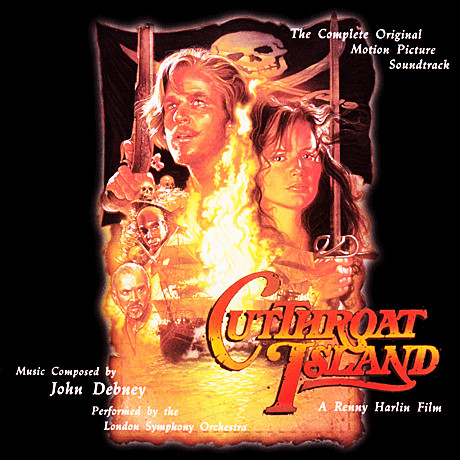 Show reviews in other languages
Cutthroat Island - 10/10 - Review of Tom Daish, submitted at 2010-09-11 08:48:06
Quite why Cutthroat Island sank a studio (almost literally) yet Pirates of the Caribbean has spawned two (so far) upcoming sequels is rather difficult to quantify. Admittedly, Cutthroat Island took everything far more seriously, while the recent Disney flick stuck tongue in cheek and turned in some hilariously loopy performances (Johnny Depp anyone?). However, in one area, Cutthroat Island stands out as vastly better and that is, of course, musically. Mind you, given the pitiful dreadfulness of Klaus Badelt's (and underlings) music, that's almost damnation through faint praise. Mind you, in truth, John Debney's work only infrequently rises above that of a skilled technician into the realms of truly memorable - he's the ultimate chameleon film composer who always seems to sound more like someone else than himself. True, Cutthroat Island owes some debt to the film music masters of the past and present, it is still a hugely entertaining and one that manages to be bombastic, but genuinely exciting, tuneful without being repetitive and manages to sustain itself over a double disc release.
The Main Title introduces the bracing, suitably heroic and windswept main theme and the one likely to stick in the mind longest. The other main material is romantic and makes a pleasing counterbalance, plus manages to be memorable enough to stand on its own and is consequently no less appealing. In fact, after a barrage of thundering brass, percussion and some heavy duty choral work, the restful periods are extremely welcome. Despite being laid on in broad strokes, the spiky orchestral writing underpinning the choral passages ensure that the texture avoids becoming too stodgy. Having said that, Debney's liner note dedicates the score to Rozsa, Korngold, Steiner and Newman, but I think even at their most extravagant most of those venerable golden age composers would have been a little more restrained.

The original single disc release is still a little tricky to find and many will find the more recent deluxe double disc edition essential. As noted, even over two hours plus bonus tracks, Debney sustains the momentum and there are few weak spots. Although the overall impression is that the tone could vary a little more, in truth there are some effective quieter moments outside of the action, notably the delightful Wedding Waltz (which went unused in the film) plus the cheekily titled faux period music in Purcell Snatcher (composed by Brad Dechter). On top of that, several of the original album tracks are expanded, perhaps most obviously the 18 minutes (or 17:72 minutes if you believe the packaging) of action covering the final confrontation where Debney manages to sustain the excitement in spectacular style, although those of a more sensitive disposition may find it all a little bit much by the conclusion.

The bonus tracks are an interesting bunch. A couple of alternates, most interestingly, a choir free mix of the Main Title, which works well and uncovers a somewhat cleaner sound and showcases the underlying orchestration. The final track is a synth demo of two cues which actually makes one realise just how much zest a real orchestra can provide as, to be honest, it all feels a little underwhelming when reduced to tinny synth patches. Owners of the single disc edition should not necessarily feel the urge to replace their original copy as it contains a fine sample of the best music and covers all of the major bases. From that point of view, the expanded release is more of the same although, in fairness, the previously unreleased is of no lesser quality. In a career with rather too many well wrought, but somewhat anonymous scores, Cutthroat Island is rightly seen as one of Debney's finest hours, brimming with melody, personality and makes for an exhilarating ride.
Cutthroat Island - 10/10 - Review of Andreas Lindahl, submitted at 2008-01-20 21:25:40
Renny Harlin's pirate vehicle Cutthroat Island, starring Geena Davis and Matthew Modine, is one of the biggest box office disasters of all time and did actually bankrupt the production company behind the film. It's an embarrassing attempt at a "fun", classic swashbuckling pirate adventure and unfortunately easily forgettable, except for one thing - John Debney's score, which is entertaining, bombastic and often completely over the top, making it one of the composer's best scores to date - if not the best - together with Passion of the Christ. The original soundtrack release has, since its release ten years ago, become something of a rarity, with fans of the score complaining about the fact that many of the most memorable and best cues of the score aren't even included. To remedy both of these nuisances, record label Prometheus Records have finally released a 2 CD complete edition of this score, which includes more than one hour of previously unreleased material.

John Debney's score for Cutthroat Island can be described with a fitting, but perhaps a little overused, term - swashbuckling. Performed by the always great London Symphony Orchestra, Debney's music is larger than life, over the top and extremely powerful and exciting. The orchestrations, by Brad Dechter, really brings out the glorious sound of the brass section of the orchestra, and this is where most of the action can be found throughout the scores' more swashbuckling parts, with strings, woodwinds and percussion lending some great support. There's even some occasional choral outbursts, giving the music a very majestic sound in a couple of cues, such as the wonderful "Main Title/Morgan's Ride", which includes the score's first, and grandest, statement of the extremely hummable main theme.

So, is it worth getting the complete score release, if you already have the original release in your collection? I suppose that depends on your opinion of the score. But it's safe to say that the new release includes lots of new interesting material - everything from excellent unreleased cues used in the film, to pieces composed by Debney but never used, as well as an interesting synth demo of the "Morgan's Ride" track. There's also some alternate versions of a couple of cues, such as a version of the "Main Title" without the choir. And if you don't already have the Cutthroat Island soundtrack in your collection, this is without doubt the version to get.

All in all a wonderful, amazing score. This is what film music is all about.
Cutthroat Island - 10/10 - Review of Andreas Lindahl, submitted at 2008-01-20 21:25:40
This score was a big surprise to me. I had never actually heard of this score when I read some nice words about it on the Internet. I decided to get it and... I was totally blown away! CutThroat Island is without doubt one of the best action/adventure scores I have ever heard.

The music is performed by the great London Symphony Orchestra and London Voices Choir, and they are truly doing a great job on this score. The music is very adventurous and grand, with sweeping strings and powerful brass and percussion. I haven't seen the film, but I guess the music works very well with the pictures. The score is packed with different themes, all great, and they pop up everywhere, making the soundtrack a very fun listen. The music is a little reminiscent of David Arnold's music for Independence Day, but where not talking about a rip-off here, just a similarity in style, most of all the orchestrations.

The soundtrack has been released by two different labels, by nu.millennia in the USA, which now is out of print, and by Silva Screen, for the European market. I've been told that the Silva release has much better sound quality and packaging, than the American version. I have only heard the Silva release, so I haven't been able to compare them, but I can assure that the sound really is great.

Other releases of Cutthroat Island (1995):