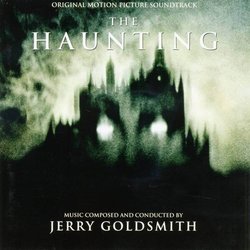 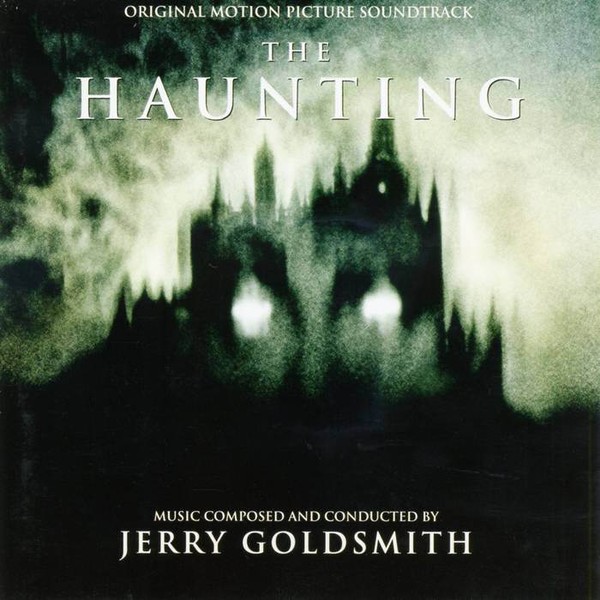 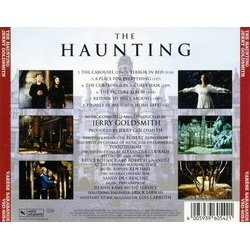 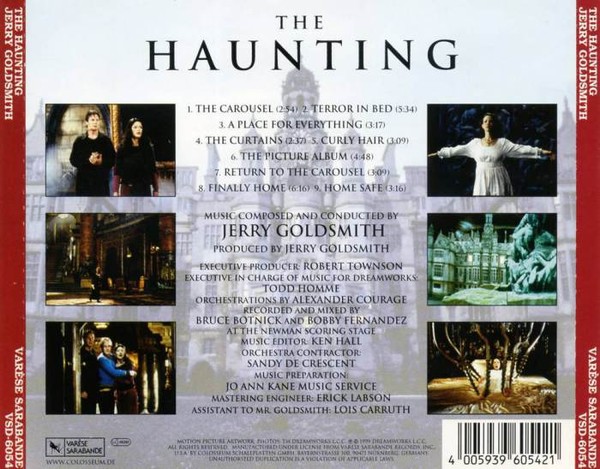 Show reviews in other languages
The Haunting - 08/10 - Review of Tom Daish, submitted at 2010-09-13 20:07:23
The Haunting was a terrible, awful and generally risible film about insomniacs, some bloke trying to help them, but really trying to test their reactions to fear. Oh, and the house is haunted because, 'some houses are born bad' - er, right, yes. Even worse, it was a remake of a pretty scary and moodily atmospheric film by Robert Wise (yes, the Star Trek: The Motion Picture and Sound of Music bloke). This effects laden remake wasn't really scary, no, it wasn't scary at all. As someone who finds anything rated higher than a PG scary, I was surprised to realise how lame the attempt to frighten this made. I guess the final sections had some decent action scenes, but these were undoubtedly enhanced by Jerry Goldsmith's varied and very good score. Jerry writes for films that are undeserving, but this was more undeserving than most. Opening with the Carousel, becuase all horror scores have to have a carousel theme, this actually relates to a room with mirrors that revolves and seemed to be (like many things in the house) there because it looked good as production designs. I assume that there is some kind of synth at work which is made to sound like a small pipe organ. This then blends into what could be deemed the main theme, a string laden melody that starts high and descends to quite creepy effect.

I have to say that all the vaguely frighening music in the film must have been mixed too low to be effective; Terror in Bed seems a lot more creepy and intense than I recall the scene being. There are some low brass sonorities which play against a flickering synth figure, the occasional dissonent violin passage and a deep drum. This track in particular highlights the very good recording of this score which booms and thunders impressively (recorded on the new Newman Scoring Stage at Fox). The other more action orientated sections include the terrific Finally Home which was the only moment when I felt any tension, mainly due to the thrilling chase music that Jerry provided. Quieter interludes are provided in such moments as Curly Hair and The Curtains, two moments when the lead female are contacted by the spirits of dead children, or something. The Curtains contains some charming flute work over an undulating string bed as well as a delightful use of harp and piano together (which occasionally suggests the theme from Star Trek: Insurrection). Curly Hair starts off very creepy with portamento descending strings, but the warm flute theme returns to end on a more uplifting note.

This is by no means a classic Goldsmith score, but it makes for a superior horror score where subtlety isn't a total pre-requisite, but it is never annoyingly over the top. It also doesn't dwell on using extreme dissonence or hair raising choirs, but achieves its mood using extremely good orchestration and by just being very well written. It's not one of Goldsmith's more terrifying concoctions, the quieter sections can be quite unnerving but always seem to resolve and the tension is disappated. The action cues are some of Jerry's more original ones recently and when at full tilt become intense and brilliantly crafted. I think that the fun and exciting score to The Mummy and the exciting, but sometimes gloomy score to 13th Warrior have overshadowed The Haunting, but in many ways this perhaps more of an original effort and once again proves that Jerry can turn his hand to any type of film of any quality and come up trumps.
The Haunting - 06/10 - Review of Andreas Lindahl, submitted at 2008-01-20 21:25:40
Jerry Goldsmith has written some great horror scores in his days, such as The Omen and Poltergeist. With The Haunting he revisits the genre, but unfortunately fails to create yet another noteworthy score, as a stand alone listen, that is.

The Haunting is mostly eerie, dramatic sneeking around music, performed by cold and nervous strings. Often when listening to the score, one gets a felling of not being alone - of someone standing behind your back. Thus, it completely delivers and makes what it is supposed to do, but I would not describe it as an enjoyable listening experience. This is music you really have to pay attention to, to be able to fully appreciate.

The score isn't particularly melodic or thematic. Mostly it's just these growling, spooky strings, sometimes interrupted by more dramatic, loud music, like the sudden strong brass driven part in "Terror in Bed". It perfectly scares the hell out of me every time I listen to it late at night. There's also the very disturbing carousel theme which opens the album, and shows up again in "Return to the Carousel". "Finally Home" is the big musical climax of the score. Powerful orchestral sound, with Goldsmith's usual synth effects. This is 6 minutes of classic horror music, and is a real highlight. Serving as a contrast to the tense and scary music, are some more melodic and lyrical parts, such as the relaxed and tender theme heard for the first time in "A Place for Everything". It's later given a full rendition in "Home Safe", which closes the album.

The Haunting is not an especially unique horror, or Goldsmith, score. Many elements and parts from other scores, primarily by Goldsmith, can be found in the music. With the amount of scores Goldsmith writes every year, it is no surprise that much of the material he delivers seem to be written solely on routine. Maybe Goldsmith should cut down on scoring, and more wisely choose what films to score?
The Haunting - 08/10 - Review of Chris R., submitted at 2011-11-09 22:25:50
In an era where modern horror has gone the way of terrible cliche's and modern droning is enough to satisfy most people who venture into the genre of Horror. But back in the day when Jerry Goldsmith was alive he intrigued the world with the most intriguing horror scores around. This score brings nothing new to the Jerry Goldsmith palette but brings together all the things I love about Jerry, his melodic grace, orchestral mastery, and his habit of sometimes putting the synth into his scores. To be blunt this score is but an extension of Poltergeist, soothing and atmospheric, loud and bombastic when it needs to, this score settles its job squarely into the movie alas that is all it does. Considering not all of what Jerry wrote was put onto the album and most of the music was so tuned down in the movie it was barely noticeable. In the end though the score is an interesting listen but it is not Jerry's best, but it sure as hell is not his worst.