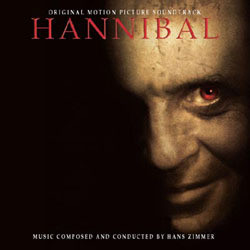 Show reviews in other languages
Hannibal - 06/10 - Review of Tom Daish, submitted at 2010-09-07 22:31:33
Although Silence of the Lambs was, in effect, a sequel to Manhunter which was the first movie based on Thomas Harris' Hannibal Lecter, Hannibal was deliberately conceived as a sequel to Jonathan Demme's hugely successful and Oscar winning film. Thomas Harris had to be coaxed into writing a book and after various negotiations, Anthony Hopkins was persuaded to reprise his role as everyone's favourite cannibal, but with Julianne Moore replacing Jodie Foster who decided to say Ta Ta, Clarice. After their work together on Gladiator, director Ridley Scott seems to have found in Hans Zimmer, some combination of Vangelis and Jerry Goldsmith. Both of those composers have worked with Scott in the past and in the case of Goldsmith at least, with results that were excellent despite seemingly being unappreciated by the director and/or the studio. Zimmer can do the 'proper' symphonic scoring of Goldsmith (up to a point at least) and also the new-age Vangelis thing. Zimmer seems a good choice, at least in terms of what Scott wants in terms of music for his films.

It took me several attempts to actually get more than a few tracks into Hannibal. The one track I most wanted to hear was not by Zimmer at all, but a sumptuous Aria that featured in the film and was written by Patrick Cassidy. To my (and many other people's) eternal delight, it is featured as the closing track on the album. I'm not really much of an opera expert and am not terribly fond of the genre, but this one is sheer bliss, beautifully written and powerfully performed. My best guess would be that it suggests Verdi more than anything, certainly more dramatic than Puccini, yet less weighty than Wagner. Apparently Cassidy is going to write an entire opera based around the piece and I'll certainly be queueing up for a copy. Almost worth the price of the album alone.

What of Zimmer's score? A mixed bag is the answer. Firstly, to the annoyance of many, the album features dialogue excerpts. However, they are read by Sir Anthony Hopkins, an actor who, as Mr Southall pointed out, could make reading the telephone directory mesmerising. In all honesty, the music under the dialogue isn't anything special, Zimmer often favouring synthetic twittering in these sections and evidently considered the album would be perked up with Hopkins' dulcet tones. However, during the later sections such as Virtue and Let My Home Be My Gallows show the score for how could it might all have been. Virtue contains some eloquent string writing and the Libera Boys Choir also providing a haunting contribution of their own, the same going for Let Me Home Be My Gallows. Firenze Di Notte sounds like an action Zimmer cue gone wrong and isn't by Zimmer at all, but is synthetic percussion with eerie noises overlaid. Not terribly interesting stuff.

Valse Tartare is an arrangement of some of the some of the Blue Danube Waltzes by Strauss, but never quite turns into the psychotic, twisted arrangement it seems to threaten to do. The selection from the ever popular Goldberg variations works fine enough, even though I've never been a great fan of that particular part of Bach's output. At its best, Zimmer's music is somewhat similar to Shore's music for Silence of the Lambs being low and intense, but the eclectic selection of music on the album coupled with quite a number of fairly uninteresting cues yield the entire endeavor a little less than the sum of its parts. The best sections are well worth hearing and often superb, such a shame that much of it is surrounded by meandering nothingness.
Hannibal - 06/10 - Review of Andreas Lindahl, submitted at 2008-01-20 21:25:40
Hannibal the Cannibal returns after ten years of silence, once again doing scary Hannibal stuff, supported by a dark and sinister score by Hans Zimmer. Performed mostly by dark strings, with dashes of boys choir, cello solos and bells, this is a score that relies more on classical influences than the electronical ramblings of the Media Ventures composers. To be honest, I would never have guessed that the score for Hannibal is composed by Hans Zimmer, even if the music at times shares musical ideas with the composers' score for The Tin Red Line - the dark, slow strings and the long, lyrical themes, although missing the great emotional impact of that score. And while The Thin Red Line was more beautiful and relaxing, Hannibal is really rather depressive, which makes it hard to really enjoy at times, even if some cues are more upbeat than others, such as Klaus Badelt's "Gourmet Valse Tartare", which draws on the sound of the great waltzes by the Strauss family, especially "An die schönen blauen Donau". It's actually quite bizarre to hear this piece burst out in the middle of Zimmer's dark score. It sort of doesn't fit with the rest of the music featured on the soundtrack.

What certainly doesn't fit with the rest of the music on the soundtrack is the voice of Anthony Hopkins found in a couple of the cues, such as the opening track, "Dear Clarice". I have said it before and I'll say it again - if I want to hear clips from the film when listening to the music, I'll just watch the film instead. As simple as that. It would be really interesting to know if the voice of Hopkins really causes more people to actually buy the soundtrack. I hope not. While these sound clips certainly doesn't ruin the music, they are somewhat distracting and disturbing, and this recent trend of including sound clips on soundtracks, over the music, scares me more than that lunatic Hannibal ever will. Sure, it's okay on discs such as "More Music from Gladiator" or "More Music from Braveheart" with much of the music often already included on the original release, but it's not okay when the dialogue ruins music not already available.

Closing the album is the opera piece "Vide Cor Meum", composed by Patrick Cassidy. In the style of the great romantic operas, this is a highly sought after piece among moviegoers and many just don't realize that it's written especially for the film. It's really quite beautiful, peformed by orchestra, choir and soloists, with a surprising little "twist" at the very end.

I really don't know what to think about Zimmer's score for Hannibal. It's quite beautiful and effective, but incredibly dark and depressing, making it hard to fully appreciate it. And did I forgot to mention that it is actually quite scary, as well? Hannibal is more than other scores music that you will either like or dislike, based on the mood you are currently in.
World Soundtrack Awards: Best Original Soundtrack of the Year (Nominee)
World Soundtrack Awards: Soundtrack Composer of the Year (Nominee)

Soundtracks from the collection: Hannibal Lecter