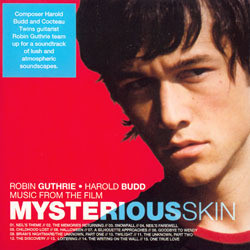 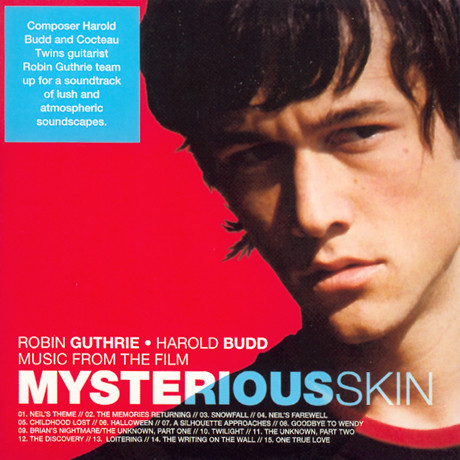 Mysterious Skin - 07/10 - Review of Tom Daish, submitted at 2010-09-26 13:31:54
Mysterious Skin's plot concerns 'a teenage hustler and a young man obsessed with alien abductions (who) cross paths, together discovering a horrible, liberating truth' and stars Joseph Gordon-Levitt, best known for his role in Third Rock from the Sun and Brady Corbet whose most high profile role to date was in the crappy Thunderbirds movie. Their performances here have evidently impressed the critics and the film has received fine reviews aplenty, so too has the trippy score by Cocteau Twins guitarist Robin Guthrie and 'legendary composer' Harold Budd. This is the former's only film scoring credit while the latter has only written for a handful of films, none with which I am familiar.
The number of small, indie films that see soundtrack releases these days seems to be on the increase, especially when, as in this case, the music is performed by the composer(s). In many cases they really shouldn't have bothered, but here entirely justified. Had it been endowed with a big budget, the film seems ripe for a Thomas Newman score, but in truth, what Guthrie and Budd have produced is probably more enjoyable than some of Newman's efforts for similarly acclaimed dramas (In the Bedroom for example). It's not unfair to say that this very much a mood enhancer rather than a dynamic musical experience, but the mixture of synth pads, electric guitar, electric piano and percussion is considerably more potent than one might expect. A trance like, hallucinatory quality pervades the entire album, which is especially effective in the longer tracks, notably Snowfall, which makes use of their length to build upon the basic ideas.

If all of that sounds a bit uninspiring and overly defensive, then it is only fair to note that the melodic content is entirely engaging. Unlike so many similar, low budget scores (those of Nathan Larson, for example), Guthrie and Budd do not simply allow the synth pads to waft along aimlessly; each track has enough purpose and fragments of melody to hold the listener. Dramatically, the score is perhaps a little inert, hardly seeking to reveal the characters' inner demons. Only on a couple of occasions does it do more than build the atmosphere, notably Brian's Nightmare. However, as a stand alone experience, it certainly has much to commend and fans of Angelo Badalamenti, in particular, will find plenty to enjoy here. Die hard orchestral fans need not apply, but for something a little different, more than worthy of investigation.
Mysterious Skin - 08/10 - Review of Andreas Lindahl, submitted at 2008-01-20 21:25:40
Robin Guthrie (co-founder of Cocteau Twins) and ambient/avant-garde composer Harold Budd teamed up for the score for Gregg Araki's Mysterious Skin, based on the novel by Scott Heim. The result is an ambient, evocative score, performed, by the composers, on keyboards, guitar, synths and percussion. It's actually guite beautiful, with lots of guitar solos, supported by a wall of pleasant synths.

Quite introvert at times, with soft synths creating a thick wall of sound, the score really shines occasionally. The six minutes long "Snowfall", for example, is like a warm, cozy blanket and its not hard to imagine a quiet snow fall while listening to this track. Excellent, dreamy music. Electric piano creates a very relaxing mood, and this music is perfect to fall asleep to. Which may sound like a remark that really doesn't give the score the respect and credit it deserves. But far from it - the score's soothing quality is definitely on the plus side. It's dreamy, tranquil and often really, really beautiful, at times evoking memories of Angelo Badalamenti's music for Twin Peaks.

It's certainly not music that will jump out and hit you in the face, and many film music fans will probably be put off by the total absence of an orchestra - since that is the "norm" when it comes to a lot of film music - but give Mysterious Skin a chance. You might be surprised...