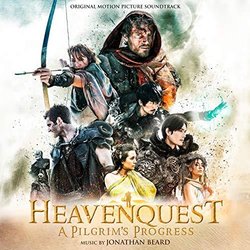 Beard, who previously scored What Still Remains and Frank Vs. God, composed a score that served double-duty — embodying both the external, epic onscreen adventure and the inward journey of progtagonist Vangel (Patrick Thompson).
As Beard notes, 'There are numerous extended sequences with no dialogue where the lushness of the score really shines, in addition to some epic battle moments. But it is the quieter poignant material that resonates with me the most and was a particular treat to compose.'

The score, a mix of electronics and acoustics, features a large percussion section and highlights vocal, violin, flute and cello solos throughout, plus otherworldy electronics to underscore the darker fantasy side of the film as well as flashback sequences.
The epic main title features a soaring vocal by Elyse Willis. 'Early on in the scoring process, I holed up in my studio with my synthesizer arsenal for a number of days, and designed numerous electronic textures that we used throughout those portions,' said Beard.

A regal man named Vangel is thrust on a journey against his will when he is suddenly and mysteriously arrested. Injured and lost after escaping the dark king’s men, Vangel begins to have strange dreams and visions of a mysterious woman in white calling him from the unknown territory of the North.
Armed with a book called “The Record of the Ancients” that he receives from a wise sage named Elder, Vangel embarks on an adventure that takes him through treacherous mountain range, unending deserts, the Lake of Doubts, and the Forest of No Return.
Along the way, Vangel learns about a fabled good king and his son in the North, but first he must make it there alive….

Premiere digital release of evocative score for new fantasy adventure film from Vudu! Matt Bilen directs, Patrick Thompson stars as Vangel, Peta Sargeant plays Ezera, Alan Powell is Aaron, In-Pyo Cha features as Elder. Vivid film portrays both an epic tale of adventure and an inward tale of self-discovery for Vangel, replete with scenes of battle and reflection both requiring lush musical scoring in grand style. Jonathan Beard composes for an array of orchestral and electronic instruments including rich solo writing for cello and violin, large percussion section as well as flute and the soaring soprano voice of Elyse Willis. As film launches with Vangel’s sudden arrest and daring escape, visions of a lady in white appear, summoning him from the North. Beard’s music accompanies Vangel’s journey through mountains and lakes, deserts and forest, all with promises of a better life…should he survive. The primary theme appears in mystic fashion at the outset of the “Opening Titles”, initially in minor mode but soon with brief, surging forays into major sonorities from the entire ensemble. Idea is briefly reprised on reflective mode for solo cello in the subsequent “Vangel In The Desert”. Beard’s alternating minor-to-major harmonic palette moves front and center for the emotional “Speaker of Truth”, giving way to the initial action material of “Vangel Escapes”. Composer Beard balances effective contrast between the tender violin and cello phrases within “He Is Everywhere” and the darker, intense weight of lower strings and dynamic percussion during “Vangel Is Sentenced”. Amongst the many ensuing musical highlights are the riveting triplet figures initially in tenor drum, then low brass and soon swirling strings that propel “Elder’s Story” and the aggressive mixed-meter rhythms of “Battle To The Gate”, the climactic action sequence with virtuoso percussion displays getting the spotlight. It’s also interesting to note how Beard maintains excitement and energy without resorting to musical chaos or dissonance. There is always clarity of line and motif, lending considerable authority to the lengthy cue. The journey climaxes with all-new melodic material for “Prince Elikai”, building an enormous amount of expression through the entire cue. When all is said and done, Beard wraps with a brief, soaring return to his main theme and codas in a satisfying major key. Intrada presents this score in digital-only format as part of our efforts to support newer films with musically-worthy soundtracks and make them available to the download audience!