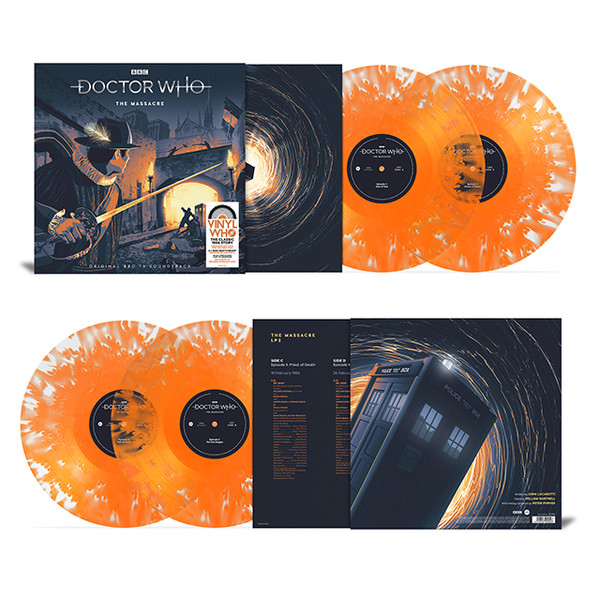 Doctor Who: The Massacre of Bartholomew’s Eve (Record Store Day 2020)

“At dawn tomorrow this city will weep tears of blood.”

In this ‘lost’ 4-part serial, first shown on BBC TV in February 1966, the TARDIS materialises in Paris in 1572, a time of great danger and religious strife. The Catholic Queen Mother, Catherine de Medici, is hatching a plot to kill all French Protestants, and the Doctor and Steven are quickly caught up in events. While Steven is befriended by a group of Protestants, the Doctor has a perfect double in the shape of the hated dignitary, the Abbot of Amboise. One of them is about to lose his life!

Presented across 2 x heavyweight 180g pieces of vinyl, in a striking ‘Parisian Blaze’ splatter, this narrated TV soundtrack evokes a classic Doctor Who adventure in all its aural magnificence. The vivid sounds of 16th Century Paris in turmoil, and the encroaching terror of the massacre, are all accompanied by the eerie sonics of Ron Grainer & Delia Derbyshire’s theme tune.

Written by John Lucarotti, this dramatic story now survives only as a sound recording. Linking narration is provided by Peter Purves (Steven) and the cast includes Eric Thompson as Gaston, André Morell as Tavannes, Leonard Sachs as de Coligny and Annette Robinson as Anne.

The coloured vinyl LPs are presented in a gatefold sleeve with illustrated inner bags and full episode billings, cast and credits.