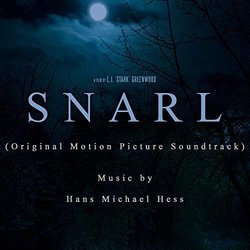 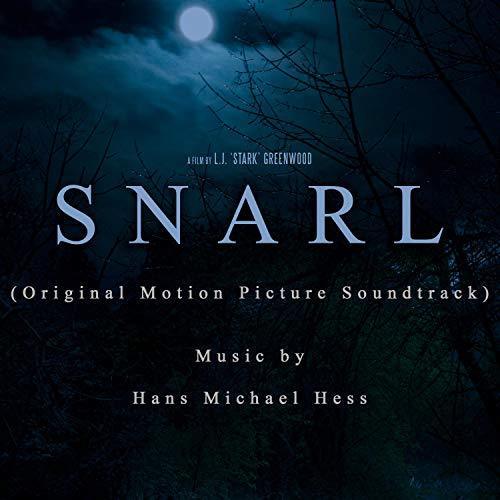 Snarl is a short film about a man who is held captive by a bounty hunter who suspects he is a werewolf.
However, the bounty hunter's daughter and son think the man is innocent and decide to free him behind their father's back. Is the man really innocent or is the bounty hunter right?

The music is again by Hans Michael Anselmo Hess (Carnival of Sorrows, Clownface, Sustain, etc...).
This time, Hess has once again recorded a remarkable score. Despite the fact that a short film has a very limited budget, the music is well finished. It must be said that the score sounds much better on the album (available on Spotify) than in the movie itself. It sounds full and realistic where it sounds a bit (too) artificial in the film.

Overall, the music sounds mysterious and exciting, although there is room for drama and even action.
The album opens with the track 'Clive and Elijah'. Clive is the bounty hunter who suspects the young man, Elijah, of being a werewolf. The track opens with a rather dark sounding, rather determined theme from Clive. We also hear the theme of Elijah, introduced by a saxophone. Bold choice, but it works. Especially if you've seen the movie. Then you better understand why.
In 'Unlock his chains' we hear a different version of that same theme, more action-driven, but no less mysterious. It then makes way for more drama performed by strings, with the cello in the lead and a little later the saxophone. Nice combination and immediately one of the highlights of the score.
'Escape' starts exciting and then naturally switches into action. When the bounty hunter reappears after seeing that his prisoner has escaped, he immediately starts a chase in a maniacal way and this is more than evident in the music.
All this continues in 'In the Woods'. Dark orchestral sounds and even chorus give the music an almost over-the-top action track.
The choir is also heavily deployed in 'The Lords Shepherd'. Again the madness of the bounty hunter is turned into music here.

Another highlight of this score is most certainly the last but not least piece, 'The Transformation Suite'. This is pure horror, and I mean this positively of course. This music can be heard, as the title suggests, when the man eventually (Yes, he does!) turns into a werewolf. The choir is summoned again, but Hess also adds all kinds of strange effects that are so effectively woven into the music that you almost think they are sound effects. The track ends with a very dramatic tone, just like the movie.

In summary: this score by Hans Michael Anselmo Hess is again a success. For a horror thriller, it is quite listenable. Thematics are also present again, as I am already used to from this composer.
Beautiful score full of variety, both in terms of instrumentation and change of atmosphere. There is actually something for everyone, despite the fact that we are talking about a short film here.