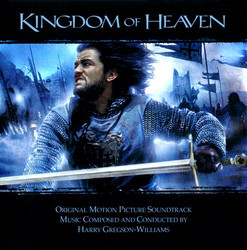 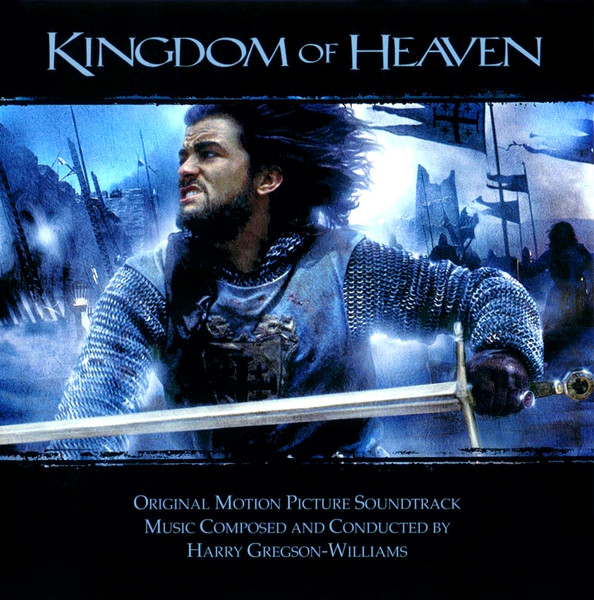 Kingdom of Heaven - 10/10 - Review of Adam Andersson, submitted at 2008-01-20 21:25:40
There are so many stories about the crusades; filmed and written; some true, some not. Ridley Scott's take on the Second Crusade, Kingdom of Heaven, however centers entirely on historically known characters, such as Balian d’Ibelin, Guy de Lusignan, king Balduin IV and his sister Sibylla. And even if the writers of Kingdom of Heaven have made use of their artistic freedom at many occasions, the baseline of the film is still the true story about the events leading to Saladin’s retaking of Jerusalem in 1187. And to follow the authenticity of the story, the score by Harry Gregson-Williams accompanies the on-screen events with medieval choral writing and Middle-eastern influences, but manages to stay away from being cliché, and the score ends up as one of the most intriguing listening experiences of late – perhaps Gregson-Williams’ most accomplished work yet.

Since Kingdom of Heaven naturally immediately is compared with Gladiator, both being historical pictures from the same director, the score will also have to face that same comparison. But this comparison is not really just, since both score and film are something entirely different from Gladiator. While Gladiator in essence was a character portrayal of general Maximus, Kingdom of Heaven basically is a film about a historical event, and focuses much less on individual characters than Gladiator did. This is also true for the score. So, it is necessary to understand that Gladiator and Kingdom of Heaven is two entirely different works, and can only momentarily be compared. Because when compared to Gladiator with its large themes and pulsing action writing, Kingdom of Heaven may seem themeless and forgettable, but this is actually as far from the truth as one can get. After some sinking in, Kingdom of Heaven steps forward as the masterpiece it actually is.

Kingdom of Heaven is not so much based on theme as on style, and it has an astounding authenticity to it, both in terms of musical styles and the instruments used. There is a strong thematic unity to it as well, indeed, but it is quite subtle. More than building the score from a single theme or a palette of leitmotifs, Gregson-Williams has opted to create a number of separate melodies for separate events in the film, only hinting at previous parts of the score as it goes along. There is at least one frequently reoccurring motif, a quite noble and emotional one first presented in full in “Swordplay”. All over the score, this short theme surfaces in different forms, by turns choral, orchestral or instrumental and vocal solos. Thanks to this theme, to which Gregson-Williams returns many times in between all the other, more momentary themes, the score feels strongly united.

This feel of unity comes also from the strong stylistic cohesiveness throughout the work; and it is with this stylistic work that Kingdom of Heaven really excels. It revolves mainly around two stylistic approaches: ethnic (Middle-eastern) instrumentation and quite religious-sounding choral writing. The chorus is present in nearly every track, mostly singing in Latin, adding a “heavenly” dimension to the score that music to such an epic story needs. And it is all extremely well done. Gregson-Williams uses choral writing techniques of the great masters – sometimes the choral parts sound like something out of a mass from Palestrina or Allegri. “Path to Heaven” fits this description perfectly, a piece for a capella chorus, working as a bookend to all the religious choral ideas in the score, and one of the best choral film music pieces since Rozsa’s “Lord’s Prayer” from King of Kings.
The use of ethnic elements is also well carried out, successfully enhancing the score and tying it to its time and place. Like the chorus, ethnic instruments are used all over the score, but they are mostly a part of the symphonic and choral weave that forms this score, never taking too much space and overshadowing the fantastic orchestral and choral work. In “Ibelin” ethnic instruments are allowed their time alone in the spotlight, introducing a wonderful Arabian-sounding theme on plucked strings; arguably the most appealing theme of the score with its beauty and sweeping character.

In between the great use of the chorus and the ethnic instruments lies a wonderful symphonic score, dominated by strings, woodwinds and percussion, with the occasional brass outburst. I guess you could have expected a more brass-dominated score for this film, at least for the action music, but that is not the case. Even the big action set piece of the score, “The Battle of Kerak”, is more dominated by chorus and string ostinatos than brass. This has of course a lot to do with Ridley Scott’s practice to often show battle scenes muted with only music – an effective approach in my opinion. And Gregson-Williams’ score really accompanies this perfectly. Do not think though, that this makes the action music any less exciting – rather the opposite. Extremely well-written string parts keep the suspense high and the choral outbursts are indeed powerful enough to rock your speakers. And the more emotional scoring also proves Gregson-Williams’ outstanding orchestral ability, with excellent string writing (“Coronation”). If someone still have doubts about Harry Gregson-Williams’ orchestration skills, Kingdom of Heaven should put an end to all such doubts; it is indeed a perfectly balanced work. Listen to highlights like “The Pilgrim Road” where all the elements of the score are melded together into a unity, and be carried away. Turn the volume up in “The Battle of Kerak” and enjoy the balance between great choral writing and exciting, percussive, action music. Listen to the score from start to finish and hear the final track fade away with a feeling of completion – a score just came full circle.

What Kingdom of Heaven actually suffers a bit from is not as clear on album as it is in film – namely temp tracks leaking through to the finished score. For example, “Coronation” is very clearly related to Patrick Cassidy’s Vide Cor Meum from Hannibal – a piece that actually replaced “Coronation” in the final film. And there is indeed more pieces from other scores that made it to the final film, of course at the expense of the original score. And this is a shame, as the score, as it is on album, is a brilliant work, destined to find its way to classical listeners and film score collectors alike with its many different qualities. It might not be something entirely new, but with its quite unique treatment of the chorus as a central element instead of only an accompaniment or a way to create effect, it separates itself from recent scores of the same genre. Thanks to Gregson-Williams’ successful integration of elements both choral and orchestral, western and eastern, electronic and acoustic, Kingdom of Heaven rises way above the film score standards of today. It is not to be missed.
Kingdom of Heaven - 08/10 - Review of Tom Daish, submitted at 2010-09-13 00:20:37
Chapter 5: Fighting One Another. To paraphrase Monty Python's Meaning of Life. A little bit of Python humour might have made Kingdom of Heaven a bit less unremittingly tedious. After Alexander, Troy, King Arthur and probably others I have attempted to forget, the supposedly revitalized historical epic genre has once again fallen onto its sword. Many hoped that after doing bringing it back to life with such gusto in Gladiator, Ridley Scott might give it another kick with Kingdom of Heaven but I can't say I was in the least bit enthralled by the story of a metalwork student who discovers his lordly ancestry and a knack for diplomacy, religious tolerance and shredding people with a sword (if the first two fail). Still, nice that Alexander Siddig can get some work after Deep Space Nine (and, in truth, he was excellent here and better than drippy Bloom who should stick to blond wigs). Seeing the film before hearing the score happens to me very infrequently and so it's quite a pleasant novelty getting to grips with Harry Gregson-Williams' score in context without the benefit of picking out the themes and ideas after half a dozen listens to the CD.

I was surprised that much of Gregson-Williams' music made little impact on me watching the film, indeed the most memorable part seemed to be Vide Cor Meum by Patrick Cassidy, which Ridley Scott also used in his outing with a serial killer, Hannibal, but here makes for a nice piece of expressive, Verdi-lite coronation music. Gregson-Williams' own Coronation cue is similar, but not as melodically strong as Cassidy's, but is still suitably stately and really rather lovely. Indeed, the terrific choral writing is the score's strongest aspect; occasionally epic but often surprisingly introspective and much in mock-period style, similar to Barry's classic The Lion in Winter. This works wonders, being expressive and providing a little period atmosphere (even though it is really nothing of the sort, but at least it feels right). A little ethnic wail creeps in occasionally, notably for The King, but the use is deft, with the benefit of being, for once, entirely appropriate.

For a bloody epic, the action is surprisingly sporadic and is somewhat less interesting; yes, it's exciting enough, but Gregson-Williams falls a bit too heavily back onto his Media Venture upbringing and some cues, notably A Better Man, pull the listener out of the otherwise fetchingly realised sound world with some hyperactive percussion. Initial impressions were leading toward a rather take or leave it view on the score - despite receiving much praise elsewhere, Gregson-Williams' work generally strikes me as aurally impressive, but fairly unmemorable. However, it is the subtlety and wealth of material that makes Kingdom of Heaven so much more admirable. Melodically, not a patch on Gladiator, but in many ways more interesting and with far more discover. Only the action needs some more refinement, but the drama is handled with care and, surprisingly for an epic, the intimate moments are those to savour. Given Zimmer's recent run of epic scores, maybe it's good that he went to Madagascar to leave Gregson-Williams to write what is likely a much more compelling work. Impressive, most impressive.
Trailer: