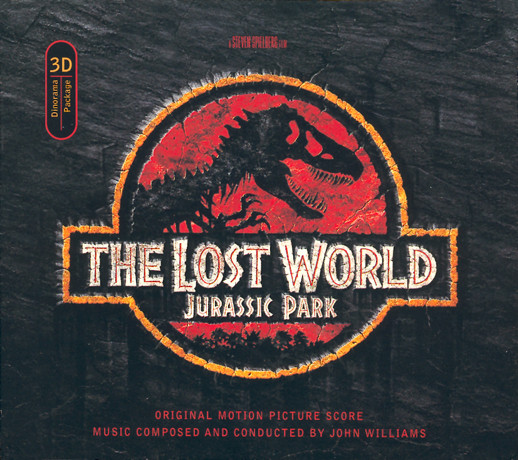 Show reviews in other languages
The Lost World: Jurassic Park - 08/10 - Review of Tom Daish, submitted at 2010-10-02 13:09:15
After the incredible success of financial reward with Jurassic Park and artistic reward of Schindler's List, The Lost World was definitely something of a let down. Spielberg has gone on record as saying that he made it almost for fun, although the cynic might suggest it was just made for money, but I'd have thought he could have made plenty by just producing. Whatever the case, The Lost World still made pots of money despite general critical disapproval. Aside from the somewhat annoying kid whose appearance was even more contrived than usual, it contained plenty of great sequences and some good, if light weight performances from not only Jeff Goldblum, but also Pete Postlethwaite as a no nonsense dinosaur hunter. Not great by Spielberg standards, but compared to the usual summer crud, superior popcorn fun.

John Williams score was written during a period when his fans were becoming somewhat unimpressed with his more mature material and increasingly subtle music. True, it's nothing like the original - it's more primal and barbaric with plenty of percussion; more of a jungle adventure than a theme park ride, which is essentially what the film is. The main theme is an aggressive adventure theme with lots of alternating time signatures and while sounding simple, is really nothing of the sort. Instead of his usual balletic action style, Williams goes for the more Goldsmithian approach of layers of percussion and strings, with brass and woodwind to punctuate the action and move the drama forward. A more simplistic approach, but during scenes such as Rescuing Sarah and The Raptors Appear, absolutely perfect. Anything more complex would simply have been wasted under shouting, sound effects and dinosaur foot steps.

There is a grimness to the quieter moments as well, Hammond's Plan is pastoral but with an underlying urgency. The modest attempts to recapture the awe and wonder of the original during The Stegosaurus is somewhat muted (and curiously similar to the Rebel Alliance cue from the middle of Return of the Jedi), but even this is calm is broken as the adult dinosaurs start to attack. The smaller dinosaurs are given suitably high register instrumentation, the pecking flutes and piccolos during the latter stages of The Island Prologue and The Compys Dine being particularly creepy. The final cues occasionally have Williams straining for something interesting to do, although the King Kong style timpani march during parts of Visitor in San Diego is a nice touch. Otherwise, the lengthy cue does meander a little in the middle, but resolves quite well into the Finale.

The Jurassic Park concert suite concludes the album, but the performance is rushed and uninspired and is a little at odds with the rest of the score, despite the odd appearance of the original themes once in a while. The film's use of The Lost World theme to finish was probably a superior choice. The more adventurous passages are not hard to enjoy or be thrilled by, although the quieter, more dissonant sections probably confound expectations and require a little more attention to be appreciated. Discussions about the recording quality of the score range from suggestions that it's very muddy to those who believe it's very well recorded. I would suggest that it sounds a little muddy because Williams uses lots of middle range orchestration and it isn't a direct result of the recording, which during the louder moments sounds just fine. John Williams meets Jerry Goldsmith meets tribal percussion. Fun.

Soundtracks from the collection: Jurassic Park