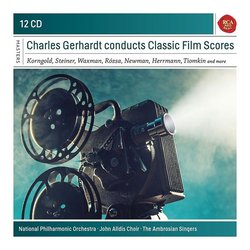 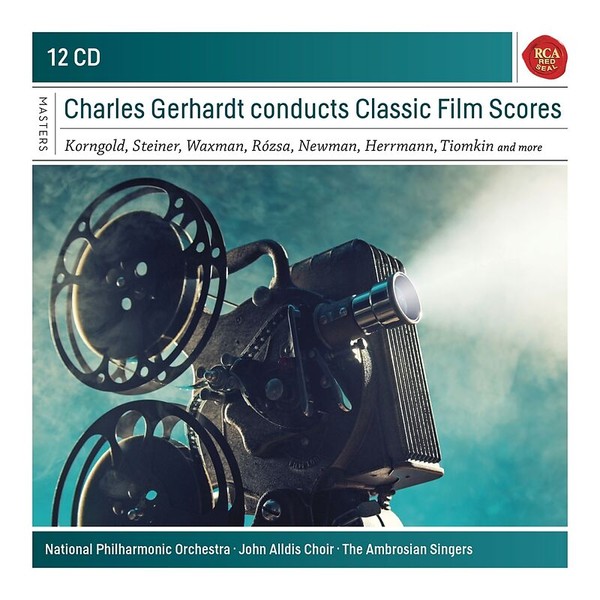 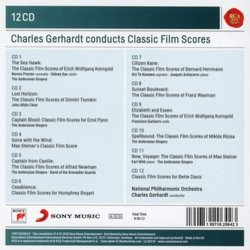 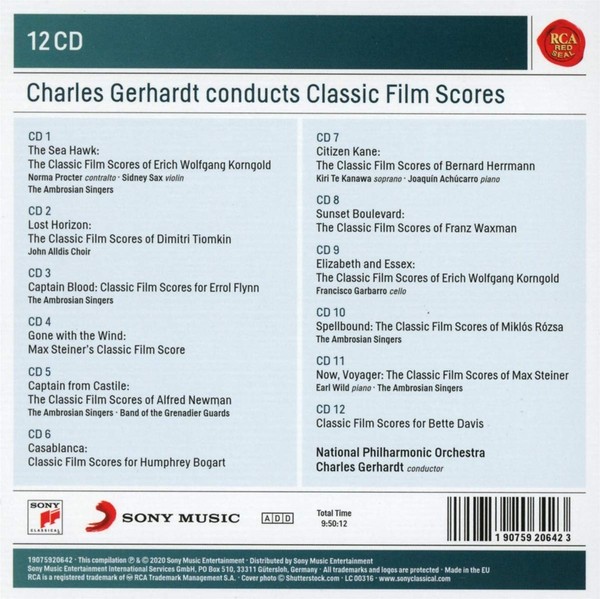 Sony Classical: It was the Warner Brothers’ 1946 Bette Davis starred Deception – in particular, its score by Erich Wolfgang Korngold – that originally aroused a passion for film music in the American conductor and producer Charles Gerhardt. Beginning his career in 1950 as a technician for RCA, where he came into contact with Toscanini, he went on to become a producer for Westminster before returning to RCA as a conductor, moving to Europe and making his name in the 1970s with the monumental series of recordings collected here for the first time:twelve discs of classic film scores, many of them Oscar winners or nominees, from Hollywood’s “golden age” with Gerhardt at the helm of London’s elite recording ensemble, the National Philharmonic Orchestra. Besides Korngold (with selections from more than a dozen films including Deception, The Adventures of Robin Hood, The Prince and the Pauper, Of Human Bondage and The Sea Hawk, the featured composers include Dimitri Tiomkin (including a medley from Lost Horizon and The Big Sky), Max Steiner (Casablanca, The Big Sleep, Key Largo, Now, Voyager, King Kong, Jezebel and a whole disc devoted to Gone with the Wind), Alfred Newman (medley from The Song of Bernadette and The Robe), Franz Waxman (medleys from A Place in the Sun,Prince Valiant, Sunset Boulevard, The Philadelphia Story and Rebecca), Bernard Herrmann (Citizen Kane, Beneath the 12-Mile Reef and White Witch Doctor) and Miklós Rózsa (Double Indemnity, Spellbound, The Lost Weekend, Ivanhoe and The Red House). “Charles Gerhardt and his handpicked London orchestra are really doing lovers of American film music a great service,” wrote Gramophone’s enthusiastic reviewer. CD 1 The Sea Hawk:The Classic Film Scores of Erich Wolfgang Korngold Norma Procter contralto · Sidney Sax violin · The Ambrosian Singers CD 2 Lost Horizon:The Classic Film Scores of Dimitri Tiomkin John Alldis Choir CD 3 Captain Blood: Classic Film Scores for Errol Flynn The Ambrosian Singers CD 4 Gone with the Wind: Max Steiner’s Classic Film Score CD 5 Captain from Castile:The Classic Film Scores of Alfred Newman The Ambrosian Singers · Band of the Grenadier Guards CD 6 Casablanca:Classic Film Scores for Humphrey Bogart.