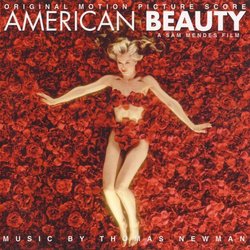 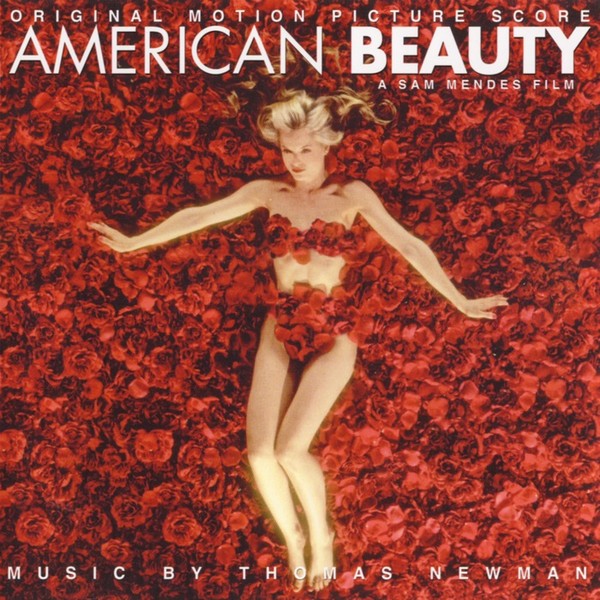 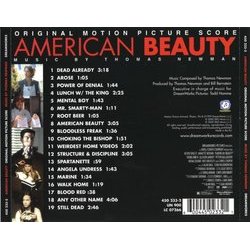 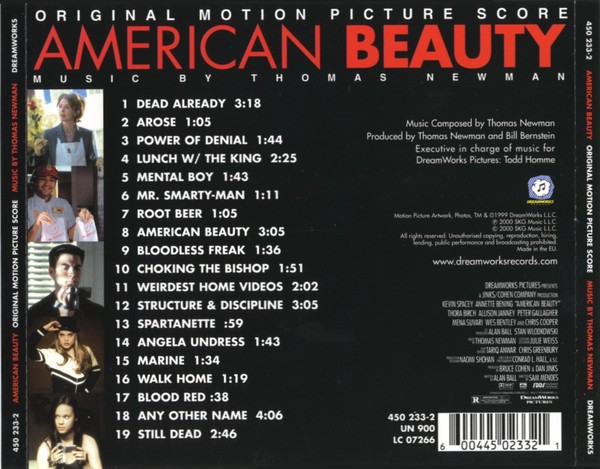 Show reviews in other languages
American Beauty - 08/10 - Review of Tom Daish, submitted at 2010-10-02 10:27:21
Internet debates about the most influential soundtracks invariably mention John Williams, then go a bit further and get to Miklos Rozsa, Erich Wolfgang Korngold and invariably you end up back at Max Steiner's King Kong which probably did more than any other early score to put the concept of a properly composed film score onto the cinema going map. Recently, Hans Zimmer might be sited, but in fairness, almost all of his imitators work with/for him at Media Ventures and it's essentially just a house style. My pick for most influential score of the last five years, if not longer, is almost certainly Thomas Newman's American Beauty. His quirky and perky marimbas and percussion is seemingly omnipresent in advertising, other film scores and the score itself was sampled, quite successfully I might add, for a popular dance remix, American Dream.

Sam Mendes' film won a slew of Oscars, but Newman was unfortunately passed over for the original score, although he was nominated. Whether American Beauty is his best score or not is open to debate (I'd suggest that it's close, but not quite), he is definitely a composer who deserves an Oscar if only because he's one of the most creative, original and now imitated film composers around. The score certainly worked in the film. The film was the sort where the acting and script were the most important ingredients, but Newman's score worked supremely well at instilling an almost inane perkiness with his minimalist marimba and percussion. A musical suggestion of the inane, repetitive and superficial pleasantry of modern life perhaps.

The darker side of the film is of course reflected in the score, the titular track midway through the album developing a sombre piano idea against a pad of synths and slightly distorted acoustic instruments. The euphamistically titled Choking the Bishop played on detuned Mandolin is a creepy distortion of the main marimba theme. Having called it a main theme, none of the ideas play the same twice, it is in essence a variations on an idea score, but most of the cues have a fairly minimalist structure and repeat a simple (or not so simple) phrase with variations mainly happening in the background.

It would probably fair to call America Beauty Newman's most successful experimental score. His odd combinations of curious instruments don't always work, but here he pretty well perfected the formula and applied to the film impressively. That doesn't mean it always makes for easy listening, but as an example of modern, non romantic symphony orchestra scoring, it's ahead of the field.
American Beauty - 08/10 - Review of Andreas Lindahl, submitted at 2008-01-20 21:25:40
A couple of years ago I took every chance I got to bash Thomas Newman's score for American Beauty. "It's just pretentious noise, performed by weird instruments". I don't know whether I or the music has changed, but American Beauty has grown on me. A lot. So allow me to make a 180 degree turn here and say that instead of noise, performed by weird instruments, Newman's score for American Beauty is a perfect example of an inventive, original score by an inventive and original composer.

American Beauty is in many ways the top and highlight of Newman's more quirky side. I'll be the first on to admit that this part of Newman's musical language annoys the hell out of me at times. And I sometime feel that he uses strange instruments just because, and not because the music, or the movie, demand it. But in American Beauty this actually works. Newman uses a large array of more or less obscure instruments, such as bird calls, phonograph, detuned mandolin, unconventional percussion and God knows what. Everything but the kitchen sink, really. Coupled with some really nice, soft piano solos, the result is a twisted score, filled with complex rythms, that's both soothing and disturbing. And quite cool, actually. The opening "Dead Already" with its groovy mallets works great, both in the film - supporting Kevin Spacey's opening voice over - and on CD.

But the largest negative aspect is that the score has a tendency to get a tad repetetive. Newman's musical language in this score may be inventive and rather entertaining, but listen to nearly forty minutes of it and it gets a little tedious. But still, this is a fresh and experimental score and we need more of those. It's just too bad that the popularity of this score forced Newman to write similar scores for a large number of other films. Such as Erin Brockovich. Yawn...