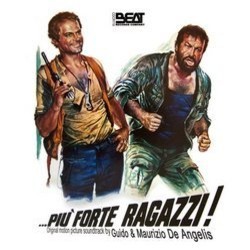 ...Più Forte Ragazzi! - 08/10 - Review of John Mansell, submitted at 2013-07-13 18:46:10 en
This rather fast paced, madcap and chaotic romp was directed by Giuseppe Colizzi back in 1972 and starred that amiable duo Bud Spencer and Terence Hill who made numerous movies together in Italy back in the 1970,s through to the 1990,s. When I originally encountered this soundtrack it was back in the days of Michael Jones and the arts theatre club in London, Michael actually worked a great flanker and sold it as an Italian Western score, A kind of sequel to THEY STILL CALL ME TRINITY he said, of course not true as we all found out, but we forgive you Mr Jones as the score is a pretty infectious and haunting one and I suppose has become a kind of mini classic amongst Italian soundtrack collectors. Composing siblings Guido and Maurizio De Angelis were renowned for producing some rather odd ball soundtracks and I suppose their style of music and also the way it is used within a movie is a rather acquired taste, you either love it or you hate it. I have to admit that there are many soundtracks that have been penned by the De Angelis Bros that I often think WHY? Did you do that why did you write that passage of music, why did you use a song here why use that instrument there etc etc etc. But! After a while and after a few years listening to many of their scores it is a sound that certainly grows on you and also a style that works within the movies that they scored. PUI FORTE RAGAZZI ! is a score that I was so pleased got a compact disc release, its one of those soundtracks that you can put into the disc player and just let it play and not have to worry about skipping any tracks as all of them do entertain and contain very pleasing attributes, plus the music is not only in the main up tempo but it is simple. The soundtrack was originally issued on a long playing record on the RCA label (which I still have), that record contained just thirteen tracks which ran for just over half an hour. This compact disc release treats us to many alternate tracks and also a handful of cues not heard before and they certainly add to the works vitality and appeal, it runs for nearly an hour and has a full and clear sound to it. The actual movie was set in the Amazonian jungles of South American and not the deserts of the United States as in the TRINITY movies the films includes gun toting bandits and smugglers which of course Spencer and Hill come into direct conflict with and the film is filled with unlikely but hilarious situations that all are rectified by the good old Spencer/Hill formula, which is a loud and well staged brawl, where no one really gets hurt or even blooded or bruised in the slightest. Its all enjoyable clean fun with the accent and emphasis on slapstick and the highly improbable. The score is a delight and is a fusion of a handful of styles, most of which are fairly up beat and vibrant, but all contain real melody and substance, whether it be a riotous sounding samba or a sensuous Bossa nova or even a instrumental version of the scores central theme song FLYING THROUGH THE AIR, it remains interesting and also enjoyable throughout the entire hour. In fact there are so many themes or versions and arrangements of themes within the score it would be very difficult to become bored or tired with it. The compact disc is presented wonderfully by BEAT records and has a great front cover which is taken from the original RCA LP release, plus there are some great notes by Ivan Bersanetti and a number of stills from the movie within the liner of the disc, so entertaining, eye arresting and long overdue, what more could you want ?