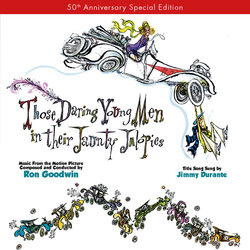 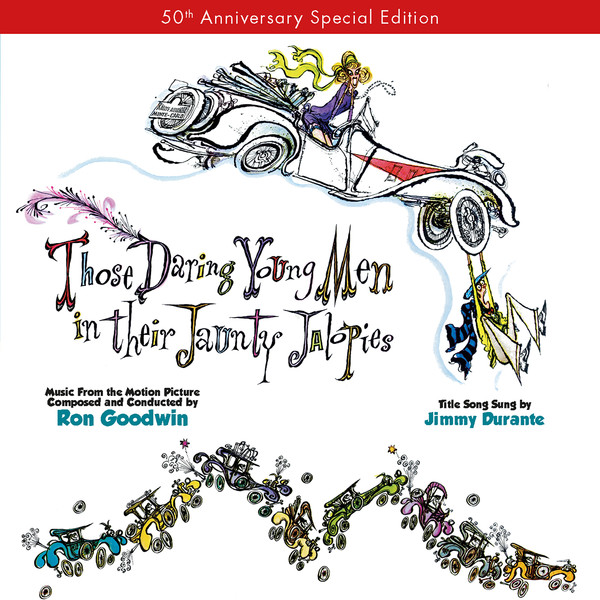 Those Daring Young Men in their Jaunty Jalopies

Quartet Records and Paramount Pictures are proud to present the world premiere complete release of the exciting, infectious score by Ron Goodwin (WHERE EAGLES DARE, SQUADRON 633, FRENZY, CANDLESHOE) for the British-American classic big-budget production comedy THOSE DARING YOUNG MEN IN THEIR JAUNTY JALOPIES (aka MONTE CARLO OR BUST!)Śa 50th anniversary celebration in a double-CD set.

Directed by Ken Annakin, the film boasts an extensive cast of some of the most famous international stars of the period: Tony Curtis, Terry-Thomas, Dudley Moore, Peter Cook, Bourvil, Mireille Darc, Marie Dubois, Lando Buzzanca, Gert Fr÷be and Jack Hawkins, among others. It was planned as a sequel to the successful THOSE MAGNIFICENT MEN IN THEIR FLYING MACHINES (1965) with Terry-Thomas playing the son of the villain of that film, but exchanging planes for carsŚspecifically, an international car rally across Europe with the usual smuggling, cheating and love at first sight. As he did for THOSE MAGNIFICENT MENů, Ron Goodwin provided the score, which continues the same fun, casual, descriptive and dynamic style. Goodwin wrote different themes and leitmotifs for the racers of each nationality, all of them tremendously catchy, developed in vigorous medleys for the final parts of the great race.

The music of THOSE DARING YOUNG MEN was released on LP by Paramount Records in 1969, with a generous length of 42 minutes. For this premiere CD edition, we have included the expanded stereo LP (with some cues that were left off the original vinyl release due to time limits) in addition to the more than 90 minutes complete score in mono, courtesy of Paramount Pictures, presented from different sources found in their vaults (mono session tapes, stems and electrovox). We also include the overture, intermission and exit music for the roadshow version of the film, and several versions of the title song performed by no less a personality than Jimmy Durante.

This collection has been restored and mastered by Chris Malone. The 20-page full-color booklet contains liner notes by film music writer Jeff Bond.