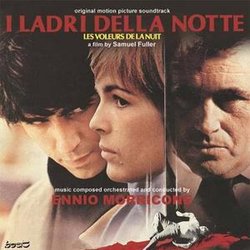 I LADRI DELLA NOTTE (aka Les voleurs de la nuit - Thieves After Dark) is a 1984 drama directed by Samuel Fuller and starring Véronique Jannot, Bobby Di Cicco,Victor Lanoux , Stéphane Audran, Camille de Casabianca, Micheline Presle, Claude Chabrol, Samuel Fuller, Samantha Fuller. Ennio Morricone wrote a perfect score to describe all the dramatic loneliness of the two protagonists linked not only by a feeling of love, but also by their criminal acts. Dark and mysterious atmospheres alternate with romantic passages for piano and orchestra ,piano and flute with a classic flavor, oriental atmosphere and a dramatic theme with funky bass. Morricone wrote one of his most beautiful themes for this film, a poignant romance of ancient taste for the two lovers. At the time, General Music pressed a 33 rpm (GM 803.054) which contained eleven selections (29:11). In 1997, the same material was reissued in Japan for the first time on CD by Soundtrack Listeners Communications Inc. (SLCS-7303), and in Spain in 2002 by Saimel Bandas Sonoras (3994210) featuring nine additional tracks approved by the composer, alternating with those of the 1984 album. We now re-release the same expanded material (42:46) but including first the tracks in the 33 rpm sequence followed by the bonus tracks from the stereo session, for a different listening experience. Available packaged in a jewel case with a 12-page booklet designed by Daniele De Gemini with mastering and liner notes by Claudio Fuiano.