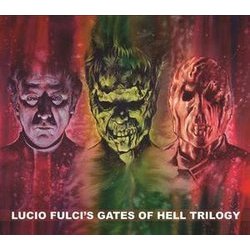 The scores by Fabio Frizzi (for the first two movies) and Walter Rizzati (for the last one) became part of the cinematic memory of these movies, with timeless sonorities much loved by fans of the films.

At the dawn of the 40th anniversary of the first movie of the trilogy, Beat Records makes an iconic homage to these scores by releasing them for the first time together, officially validating the link between these films. The dedication, which we imagine would be appreciated by great Lucio, is in the cover art featuring the films’ three evil protagonists, Father William Thomas (Paura nella cittŕ dei morti viventi), Schweick (E tu vivrai nel terrore… l’aldilŕ!) and Dr. Freudstein (Quella villa accanto al cimitero), magisterially painted by English artist Graham Humphreys. The 40-page booklet—richly illustrated and featuring liner notes by Antonella Fulci, the director’s daughter—is the Eibon sigil on this luxurious edition, a must-have for all lovers of good film music.