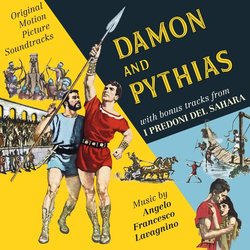 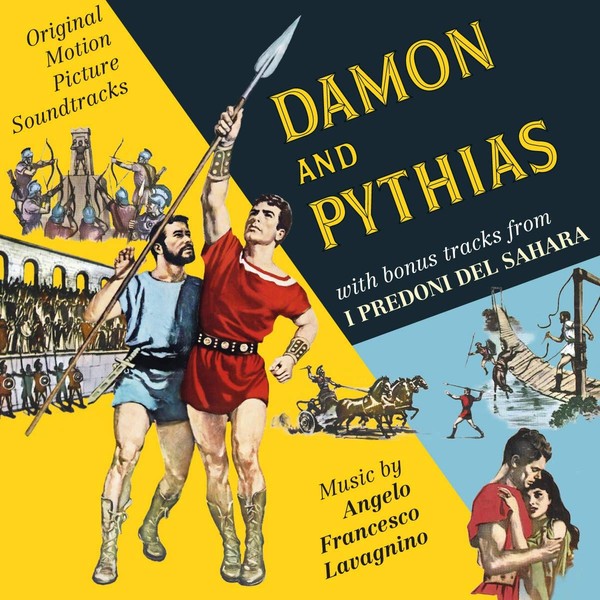 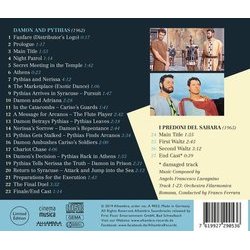 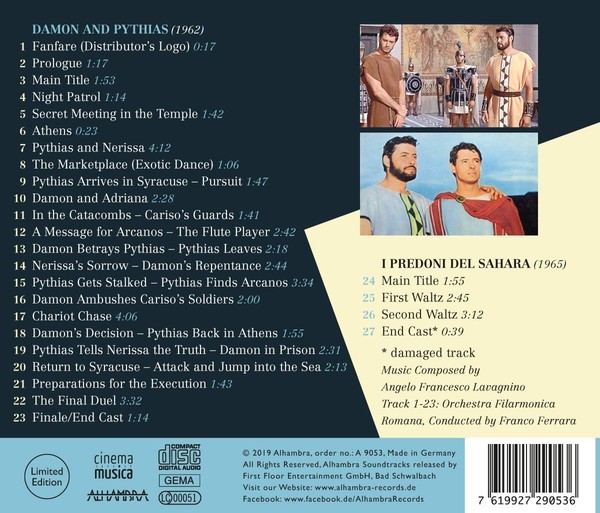 Alhambra Records proudly presents on this CD the world premiere release of Angelo Francesco Lavagnino’s complete original score in stereo for the 1962 peplum movie DAMON AND PYTHIAS which was an US-Italian co-production directed by Hollywood veteran Curtis Bernhardt starring the two US actors Guy Williams and Don Burnett who both had already achieved some fame through TV series during the late 1950s.

Throughout the centuries the famous Greek legend of the two friends Damon and Pythias had provided the basis for many plays and ballads. During the silent film era a first cinematic adaptation had been produced in the USA, but it was not before 1962 when the MGM production company decided to tackle a second sound version in colour of this immortal story about one friend offering his own life to save the other´s.
The story takes place in the Greek colony of Syracuse in 400 B.C. when the liberal Athenian Pythias (Don Burnett) is condemned to death by the dictator Dionysius who is hunting down members of the Pythagorean cult who believe in pacifism. However, Dionysius allows Pythias to return to Athens to visit his ailing wife with the understanding he will then come back to face his punishment. Damon (Guy Williams), a street thief and friend of Pythias, offers himself as a hostage to guarantee Pythias' return. Dionysius doesn´t expect Pythias to keep his end of the bargain and wants to publicly expose the falsity of his beliefs.

Since the end of the 1950s Lavagnino had become an expert in scoring many sword and sandal movies which above all during the early 1960s were at the peak of their popularity. However, DAMON AND PYTHIAS is a bit of an atypical genre entry as there are no musclemen heroes, barely clad heroines or mythical creatures to behold. Rather it is a film about the power of friendship and Lavagnino takes this into account in his remarkable and varied score which often seems to be accompanying a film far more ambitious than the one for which it was written. The main theme which works as a kind of frame and which is intoned in the Main Title and Finale is a noble and expansive theme intoned by the full string section and backed by distant French horns which underlines the idea of friendship. For the main part of the score Lavagnino above all concentrates on the two love relationships between Pythias and his wife Nerissa and between Damon and his mistress Adriana, each of which have their own themes. With great sensitivity the composer emphasizes the feelings, thoughts and psychological conflicts of the four main characters with partly intimate, but also sweeping romantic music which makes for a delightful listening on its own.
The film also contains one memorable action sequence as Damon and Pythias flee from a band of Syracusan soldiers via horseback and a horse-cart. For the ensuing chase Lavagnino composed a dynamic and powerful piece of battle music – it is a real set piece with a duration of about four minutes. All in all, this is an imaginative, romantic as well as epic score in which Lavagnino shows off not only his mastery of the full orchestra, but also how subtly he can employ different solo instruments in some intimate settings.

As a bonus we have added at the end of the CD the only few surviving tracks – the nicely flowing oriental main theme plus two waltzes - from Lavagnino´s score for the nowadays very rare desert adventure movie I PREDONI DEL SAHARA from 1965 which was directed by the Italian Guido Malatesta under the pseudonym James Reed and starred a number of rather obscure actors like George Mikell and Pamela Tudor.

This exciting CD project – the 14th CD in our Lavagnino series – has only been possible thanks to the generous support of the three daughters of the composer – Bianca, Iudica and Alessandra Lavagnino -, who still had open reel tape copies of the original stereo master tapes of DAMON AND PYTHIAS in their personal archive which we were allowed to use. Our CD edition which contains a 12-page booklet with extensive liner notes and colour stills from both movies will be limited to 400 copies.