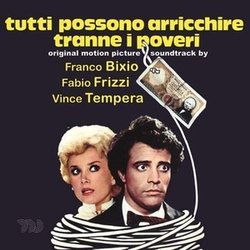 Tutti possono arricchire tranne i poveri is a 1976 film directed by Mauro Severino, starring Enrico Montesano, Barabara Bouchet and Anna Mazzamauro. It tells the story of a couple who comes into sudden wealth thanks to a football lottery and of their vicissitudes in blowing the newfound fortune.

The music for this funny and oblique comedy was composed by a trio of musicians very much industrious throughout the 1970s: Franco Bixio, Fabio Frizzi and Vince Tempera. These three musicians had developed a defined triangular identity, composing wonderful scores such as 7 note in nero, Sella D’Argento, Godzilla il re dei Mostri, Il secondo tragico Fantozzi, Febbre da Cavallo, Roma l’altra faccia della violenza, I quattro dell’Apocalisse and many more.

It was an incredible and prolific collaboration that gifted Italian cinema with iconic scores, celebrated here once again with this unreleased score that doesn’t delude expectations, released as part of the DDJ series and presented in a transparent jewel case and featuring a 12-page booklet designed by Daniele De Gemini, mastering by Claudio Fuiano and liner notes by Marco Ferretti. To celebrate this release, the three musicians were interviewed by Mr. Ferretti, resulting in a long and entertaining amount of info about the trio which you can read in its entirety in our press section at www.beatrecords.it