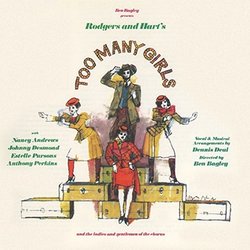 Too Many Girls opened at the Imperial Theatre on October 18, 1939, running a total of 249 performances. The show was directed by George Abbott, the book was by George Marion, Jr. and of course the score was by Rodgers and Hart. In the cast were Eddie Bracken, a young Van Johnson, and a brash newcomer named Desi Arnaz. RKO made a film of it in 1940, with Bracken and Arnaz repeating their Broadway roles alongside Lucille Ball, Ann Miller, and Richard Carlson.

The show produced a couple of Rodgers and Hart classics, including “I Didn’t Know What Time It Was.” The songs are delightfully daffy and old-fashioned. In 1977, Ben Bagley went into the studio with performers including Estelle Parsons, Johnny Desmond, Nancy Andrews, and Anthony Perkins, and made a studio cast recording. Arrangements and orchestrations were by Bagley regular, Dennis Deal. He later reissued it on CD.

As always with our Bagley reissues, we have cleaned up and spruced up the sound, corrected the previous CD release’s erroneous track listing, and there are new liner notes and, of course, the great Harvey Schmidt artwork.

Too Many Girls is fun and tuneful – after this show there would be only four more Rodgers and Hart shows before Hart’s untimely passing.