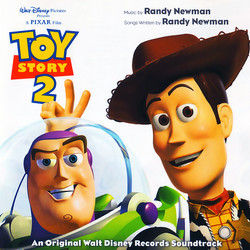 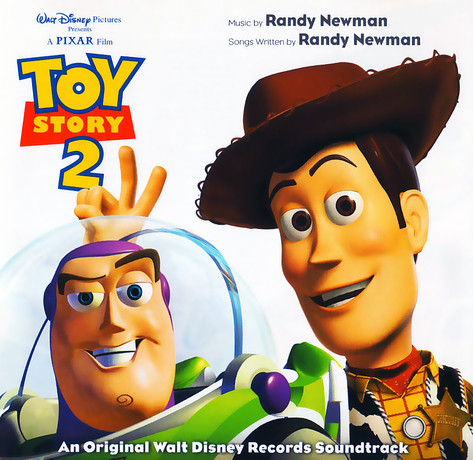 Show reviews in other languages
Toy Story 2 - 06/10 - Review of Tom Daish, submitted at 2010-10-02 10:16:44
After his success on both the original Toy Story and A Bug's Life, Randy Newman once again teams up with the Pixar team for their Toy Story sequel. One of the hilights of the original were the great songs, all sung by Newman as more of a backing to the screen action rather than being sung onscreen. For the sequel, Newman doesn't (fortunately or unfortunately - depending on your point of view) get to sing. The opening Woody's Roundup is a weird hoe-down kid's TV theme kind of thing - although I thought that the solo fiddle work sounded more like something that Stefan Grapelli might play. It seems rather long for a kids TV theme, but it's great fun and with a lively performance by Riders in the Sky. When She Loved Me can certainly be added to the catalogue of beautiful female solo songs that Newman has composed. Sarah McLachlan's voice seems to become a fraction thin in the higher sections, but otherwise the performance is lovely. While not in the same league as Feels Like Home it is still very fetching and warm hearted. The performance of You've Got a Friend in Me (the song that everyone remembers from the original) turns the rather intimate ragtime version into a full blown big band version. It curiously reminded me of the kind of big band songs they have on the Simpsons - indeed Robert Goulet appears on said TV show singing Jingle Bells. His performance here is a wonderful croon that only adds to the loony charm of the overblown, but hilariously entertaining effort.

As with the original, the score itself is a fraction hit and miss, although I think it's a fraction more coherent. Yes, there are the start-stop radical changes in style from time to time, but the there are some good more extended sections. The opening cue, Zurg's Planet is a delightfully overblown sci-fi extraveganza that retains the Newman sound, but successfully adapts it to outerspace. The emphasis in a lot of the score is on more ye-haw country and western elements, most notably in Woody's Dream. These actually form some joyous extended sequences that make a change from the flitting about that occurs. The album rounds out with an instrumental version of the big band You've Got a Friend in Me which is perhaps a fraction surplus (I seem to have more versions of that song than I thought possible), but is an enjoyable way to round out the album.

All in all, slightly less coherent than A Bug's Life, but lacking enough great new songs compared with the original. As an album it works better than the original I feel - the score does jump about, but less often and recurring motifs and musical ideas make it a slightly smoother journey. Not Newman's best score for a kids film by any stretch, but a great opportunity to hear him having fun with an orchestra.
Toy Story 2 - 08/10 - Review of Andreas Lindahl, submitted at 2008-01-20 21:25:40
Randy Newman may not be one of the most prolific film composers working today, often scoring "just" one film a year, and some years we do not hear anything from him at all. But the scores he write are all of high quality and great entertainment value. Toy Story 2 is no exception. The score is filled with upbeat, exciting music, often based on the Mickey Mouse scoring technique, which makes the music very varied, but also a little disturbing at times, as I personally have a very mixed attitude towards this kind of scoring.

The score part (there's also a couple of songs included on the disc, but more about those later) of the CD opens with some excellent sci-fi music, or rather a superb pastische on this kind of music, such as Star Wars or Star Trek. It is tongue in cheek and over the top, making it really entertaining and funny listening to, proving that Randy Newman would be more than the right person to score the next installment of the Star Trek saga. The cue "The Cleaner" is also a definite highlight. With its sherzo like style, catchy melody, and playfull orchestrations it reminds me of John Williams' score for Home Alone for some reason. This is Randy Newman's music as its best.

In the void between Newman's scores for Pleasantville, A Bug's Life and Toy Story 2 I took myself the time to learn about and discover Randy Newman's career as a song writer and singer. Had I been aware of what I had been missing all these years, this is something I would have done much sooner, that I can tell you. Toy Story 2, as well, has been blessed with a couple of songs by the composer. Opening with "Woody's Roundup", this is a country inspired song, performed by Riders in the Sky, used as source music, for the TV show Woody is hosting in the film. "When She Loved Me" is a simply wonderful, emotional and soft song, sung by Sarah McLachlan. She does a good job, although her voice sometimes has a tendency to get a little too high and therefore get somewhat fragile. Would have been interesting, had Newman himself sung it instead... "You've Got a Friend in Me", was originally written by Newman for the first Toy Story film, performed by Randy himself. This version is sung by Robert Goulet, as the voice of Wheezy, backed up by a jazzy big band. It's quite groovy and entertaining, although I must say that I like Newman's own version better. This song is also available as an instrumental version, at the end of the disc, performed by big band and Tom Scott on saxophone.

Toy Story 2 is a very good, entertaining and fun score to listen to. This, along with the equally good songs, makes this release a must have for every Randy Newman fans out there.
This soundtrack trailer contains music of: