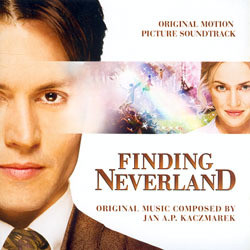 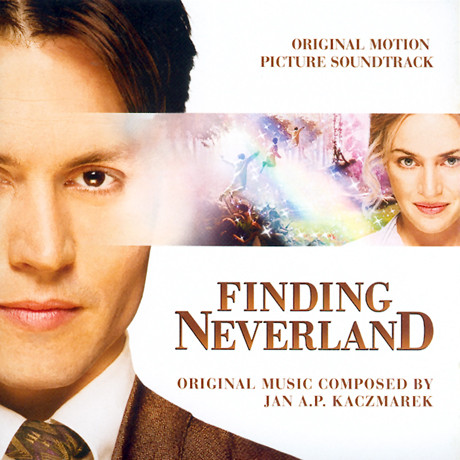 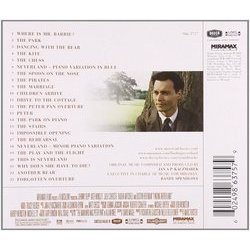 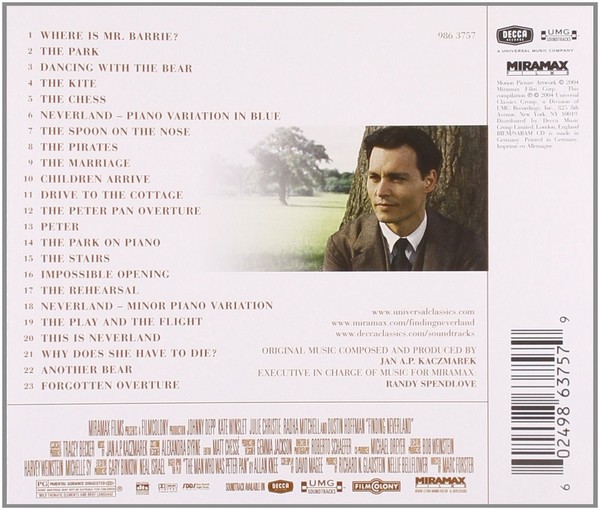 Show reviews in other languages
Finding Neverland - 06/10 - Review of Tom Daish, submitted at 2010-09-28 21:40:17
Just one year after P J Hogan's delightful live action film version of Peter Pan we have Finding Neverland, a fictionalised account of how J M Barrie came to write his most famous play, with Johnny Depp as the man himself. Largely received well, the only complaints surround the softening of certain aspects of Barrie's life, turning it more into real life fantasy than a searching biopic. Jan A P Kaczmarek isn't perhaps Hollywood's most high profile composer, but has cropped up on a range of projects from the adultery thriller Unfaithful to the horror of Lost Souls. Here the composer is on much more delicate and whimsical ground, although just a little of the darkness of those earlier scores might just have made this one a bit more interesting.

Finding Neverland starts strongly with the delightful Where is Mr Barrie? which suggests a light hearted playfulness, with a that a little European quirkiness. The children's chorus verges on overkill, but as an occasional decoration, works surprisingly well. Cues that feature this style make for the score's most memorable tracks, but much of the album is rather more low key. Unfortunately, Kaczmarek makes things rather too soft and pleasant, coming across as a more thinly textured variant on James Horner's gently whimsical style. Nice for a short while, but there is a nagging lack of grit to the drama. The seemingly endless piano solos (which bring to mind Michael Kamen's lower key work) bog the album down in their frilly niceness. Fortunately, the occasional sombre moment - The Marriage and The Play and the Fight - are a nice antidote, but rarely suggest any real depth.

There isn't anything inherently wrong with Finding Neverland, it's a very pleasant listen and would make a solid 40 minute album, but at almost an hour, overstays its welcome with insufficient variety of tone or pace to sustain almost an hour. For some reason, and without wishing to seem too disingenuous to Kaczmarek's efforts, I couldn't help but think what Alexandre Desplat might have brought to the material. The evidence of Girl with a Pearl Earring and Birth suggest he could have injected some real drama and fragility to offset the overt niceness. If all that sounds like a big downer on Kaczmarek's effort, then it's only fair to point out that it is an attractive and tuneful score, but one that leaves the nagging feeling that too much of the real drama has been held back for the sake of a warm, musical glow.
Finding Neverland - 10/10 - Review of Andreas Lindahl, submitted at 2008-01-20 21:25:40
Let's get to the verdict right away: Polish composer Jan A.P. Kaczmarek has written one of the best scores of 2004 for Marc Forster's Finding Neverland. From start to finish this is an incredibly entertaining, charming and beautiful score, filled with a sense of wonder, innocence and magic, without ever getting over the top or too sentimental - or too understated.

Kaczmarek often favours the upper register of the instruments at his disposal, which at times creates a rather fragile, but also very light and sparkling, sound. The sound of a children's choir adds to the experience in some cues, such as "The Spoon on the Nose", or the lovely opening track, "Where is Mr. Barrie?", where the scores' excellent main theme is heard for the first time. The composer also uses the piano to great effect, at times together with the rest of the orchestra, but also as a solo instrument, and the soundtrack includes some absolutely amazing piano cues, performed by pianist Leszek Mozdzer. These are more or less improvisations and variations on the scores' major themes and these cues - "Neverland - Piano Variation in Blue", "Children Arrive", "The Park on Piano" and "Neverland - Minor Piano Variation" - are some of the biggest reasons this score is so incredibly charming and beautiful.

The score is mostly rather subdued (meaning that there are very few moments of powerful orchestral outbursts), dominated by strings and woodwinds, but there are a few exceptions. The cheery, and tongue-in-cheek "The Pirates", is packed with brass fanfares and percussion. While listening to this track at work I received a "My God, what on earth are you listening to!? That's so cute!" comment, which is a rather fitting description, I suppose. There's also the optimistic "The Peter Piano Overture", with lots of lively woodwinds and harp.

Other releases of Finding Neverland (2004):