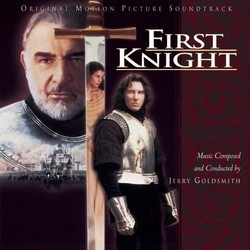 First Knight - 10/10 - Review of Adam Andersson, submitted at 2008-01-20 21:25:40
Now, in the summer of 2004, it is time to look back and wonder over the fabulous output of master composer Jerry Goldsmith that just recently was taken away from us. A career that stands out as one of the most prominent in the whole history of film music, comprising over two hundred different scoring assignments, spanning over almost half a century. A career to remember.

And among the numerous fantastic scores that Goldsmith composed, 1995’s First Knight is one of those standing out to me as one of the composer’s most successful achievements. For this Arthurian romance story, Goldsmith composed one of his most sweeping, romantic and emotional scores, complete with rousing action music and a powerful choral finale. On CD it is also nothing but brilliant, giving us forty minutes of unspoiled Goldsmith perfection that ranks among the best works in the composer’s career.

The CD opens with the 40-second “Arthur’s Fanfare”, a trumpet and horns fanfare, which is a nice introduction to the CD. Many have said this to be an unsuccessful piece out of the film, but frankly, I can’t see what the problem is. The fanfare introduces the final strain of the grand Camelot theme, a very noble, knightly theme which I’d say is this score’s largest gem. The Camelot theme gets a proper full introduction in the second track “Promise Me” performed on horns and strings, underlined with a steady snare drum rhythm. At the end of this track the trumpets also join to form a processional form of the theme as king Arthur and his future queen Guinevere rides through the gates of Camelot. In the middle of that same track, “Promise Me”, in between the performances of the Camelot theme, the score’s tender love theme is introduced on solo oboe accompanied by harp. This is a wonderful love theme, beautiful with a sorrowful twist, which fits the story very well – after all the film essentially is about forbidden love. The strings later join in the performance, and it grows up to the restatement of the Camelot theme, which ends the track in splendour.

The two aforementioned themes form the basis of the score’s thematic material, and that is a very good base, both themes being very memorable and will surely stay in your mind for hours or even days after the CD has finished playing. The two themes feature frequently in the score, in different versions, the love theme on various solo winds as well as full orchestra, and the Camelot theme in both soft solo statements as well as powerful brass chorales. There are other themes in the score as well, most notably the aggressive short motif for the film’s villain, prince Malagant, a high string figure performed in the middle of action when Malagant appears. The score also features an adventurous theme for Lancelot, but strangely enough, this theme has not made it on to CD at all.

Aside from the very strong thematic work in First Knight, which dominates many of the ten tracks on the CD, there is also some excellent action music in the score, in my opinion even some of Goldsmith’s best. It is mainly brass dominated, very rhythmic and effectively orchestrated with steady percussion rhythms and often advanced string work over and under the main brass choruses. Unlike much of Goldsmith’s action music there is no electronic effects at all in First Knight. Even if I believe that Goldsmith’s inclusion of electronic effects in his action music often is rather successful, this is even more successful, it being a wonder of pure full orchestral work, with long lines in both brass and strings as well as some thematic quotes. Most notably of course the Malagant motif, which makes appearances in the middle of action in both “Raid on Leonesse” and “Night Battle”, the latter having some similarities with Holst’s Mars in its heavy rhythmic work. A variation of the first strain of the Camelot theme also surfaces at some points. And, above all – this action music is never unlistenable, it stays so qualitative all the way through the pieces that you will never grow tired of it.

Other highlights of the score is the third track “Camelot” where the Camelot theme’s first strain gets a wonderful rendition once again on horns and strings, but with a majestic trombone figure and timpani below. “Village Ruins” is also a great example of effective orchestrations in First Knight, where the orchestra successfully pictures a ruined village with uneasy muted brass and fluttertongue effects in the flutes.

And then the final two tracks of course – arguably the best part of the score. First comes “Arthur’s Farewell”, (although the two last track titles should be swapped – “Camelot Lives” is much more fitting for this cue. I will keep to the CD’s titles though) which is the score’s largest action set piece – a thundering orchestral cue complemented by a full chorus, of the same calibre as Orff’s “O Fortuna” from Carmina Burana. This piece is what I would like to call Goldsmith’s best choral action piece ever – its tremendous power rivals even that of Williams’ excellent “Duel of the Fates” and Lennie Moore’s Outcast action cues.

The chorus returns in the final track, “Camelot Lives” – but not until the end of the track. The final track first develops a new theme, which I am not sure what it represents, that was introduced briefly in “Village Ruins”. It is a wonderful theme nonetheless, first performed on horn and then trumpet. Then we get to hear a performance of the love theme on flute, before the new theme returns in a heartbreaking statement in first full orchestra, then solo flute and finally strings, before the chorus returns in a grand statement of the Camelot theme, that ends the score in a powerful crescendo.

First Knight represents Goldsmith at his very best. The great themes, the wonderful action music, the choral work… Actually there is really nothing bad I can say about this score. The only setback is that the CD is somewhat incomplete, missing some good score moments, but all in all, the commercial release is satisfying enough, giving a good representation of the score. First Knight seems to have conjured the very best out of Goldsmith, resulting in this being one of his best scores, and arguably the last of his real masterpieces. An essential inclusion in any score collection.

This review is dedicated to Jerry Goldsmith’s memory. He and his music will stay forever in out hearts.
First Knight - 10/10 - Review of Tom Daish, submitted at 2010-09-13 20:05:50
I'm not entirely sure why some people have complained about this score. It is one of the best Goldsmith soundtracks I have bought in ages. It has everything an epic action/romance movie needs, brassy fanfares, a stirring theme, a tender love theme and thunderous action cues. I had the first two tracks on Hollywood '95 and was very impressed by those selections. However, unlike a few scores I have bought as a result of a good airing on a compilation, the rest is just as good as these tracks. The action cues are loud and exciting, Raid on Leonesse and Night Battle being the two highlights as far as action is concerned and are the best ones I've heard from Goldsmith since Star Trek V. It has been compared to The Wind and the Lion and having heard that, I would say that I enjoyed First Knight a whole lot more. I think that missing out the Moroccan and other ethnic influences helps a great deal. Arthur's Farewell introduces a choir, perhaps it should have been deployed here and there rather than just at the end, but it is still very effective and certainly makes for an exciting choral action cue. It occurred to me that both this a Glory were temp tracked with Carmina Burana for some of the action cues. Both have produced stunning choral cues as a result, although Goldsmith's is much more aggressive whereas Horner's is much more moving. The finale track to First Knight, Camelot Lives is considerably more sombre and moving than the rest of the score, but uses all the themes effectively and ends this perfectly. Probably the best Goldsmith soundtrack I have bought since Star Trek V and is most definitely my favourite non Trek Goldsmith score. More, please!