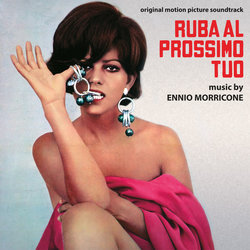 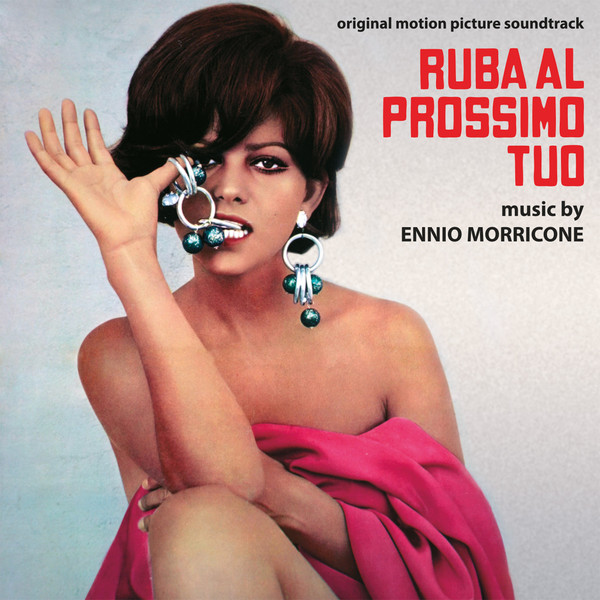 In 1995 GDM Music issued a compilation CD called “With Love” (GDM 2007), a collection of love themes composed by Ennio Morricone.
One theme from “Ruba al prossimo tuo” was enclosed directly transferred from the music track of the movie itself, but the source was in terrible conditions that did not make possible to create a master for a complete CD.
An expanded suite (always taken from the same disputable source) was later enclosed on a Japanese CD (Volcano CPC8-1099), but unfortunately the sound quality was mediocre. We discovered the original master tapes containing the whole original recording session in a very good mono sound.
This CD encloses every musical note recorded in 1968. Just a curiosity: foreign versions of the movie are circulating with alternative music not penned by Ennio Morricone, extracted possibly from pre-existing libraries.
Therefore this CD contains ONLY the original music composed by Morricone, conducted perfectly by Bruno Nicolai.

Ennio Morricone wrote a monothematic score including several orchestral variations of the main theme, a brilliant and very romantic motif with Lounge flavour, vocalised by I Cantori Moderni di Alessandroni. Introduced first in “Titoli di Testa” and reprised with several variations throughout the score: a Classic style version with harpsichord, organ and mandolin, a slow and dreamy one with the voice of Edda and also including the choir I Cantori, a samba version, a beat-flavoured mysterious version, another version once again with the splendid magical voice of Edda and a slower variation with the whistle of Alessandro Alessandroni.
The style of Ennio Morricone strongly recognizable in a second theme, very romantic and lounge, featuring a keyboard used by the author, frequently also in other scores like “Giu la testa”. A classic-style minuet theme with the operatic vocalism of Edda enriches the score.
The third theme is a brilliant orchestral samba introduced by the type machine and developed by the whole orchestra and then reprised with the performance of the wonderful Cantori Moderni.
This Cd also contains three superb “shake” dancefloor music themes that bring us the unforgettable Beat atmospheres of those days’ discoteques.

Esmeralda, daughter of an Italian police officer and descendant of a family of policemen, arrives in New York to track down an American police officer who is a friend of his father's.
Finding him, after some skirmishes, she reveals the purpose of his visit: having stolen some jewels to a famous and rich family, wants to put them back in their place before they realize it. Evaluated the different solutions, the two decide to go directly to the winter residence of the robbed, in Austria, to study how to enter and make the coup... reverse….