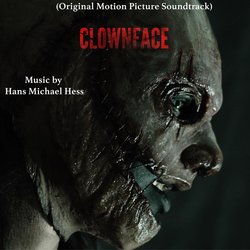 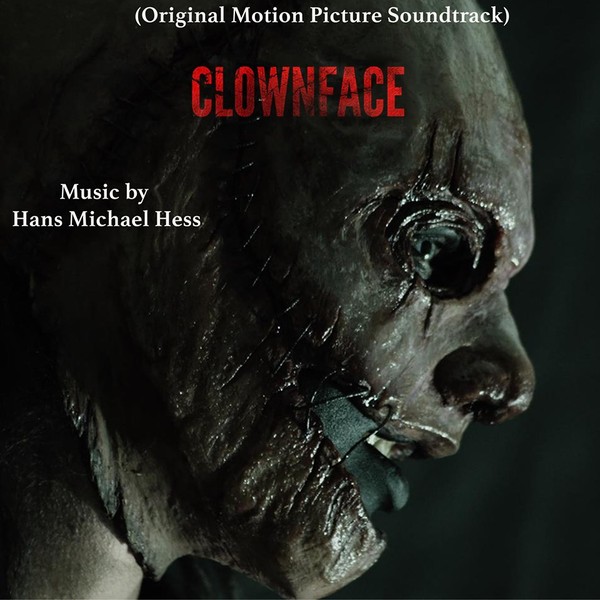 Clownface is an independent low budget slasher movie about some kind of weird mask-wearing psychopath called Clownface. The film itself is not the best I’ve ever seen in the genre but far from the worst eiter. Let’s face it, the actors are not very convincing, despite some exceptions like Zoe, one of the main characters for example and the story has a few plot holes here and there but it still is worth watching, albeit for its rather surprising end. I won’t tell the whole story of the movie, because the subject of my review is Hess’s music which is the best element of this movie.

Let me start by saying that I already was surprised by this composer’s first score, Carnival of Sorrows. As you might have read in my review I quite liked it but the only thing that bothered me was the ‘plastic’ sound, I missed some real instruments. Perhaps, Hess did listen to my opinion. This score sounds a lot more real than its predecessor thanks to the use of real instruments instead of keyboards and synths only. Not that it’s a symphonic and without any electronic sounds, not at all. It is more a successful combination of both worlds. And that’s what makes this score so great. It’s got all it needs to be a good score: like in ‘CARNIVAL OF SORROWS’, there is a strong thematic approach, some real instruments in combination with keyboards & synths, variation, terrifying creepy sounds and effects which are a must in a horror movie score.

The overall mood of this soundtrack is very dark, tenebrous, aggressive but still with some moments of rest to give the opportunity to the listeners to take a deep breath before diving again in the Clownface’s world of madness.
After a short dark introduction ‘’He’s Coming’’ we get our first theme, ‘‘Zoe’s Theme’’ followed by ‘Clownface’s Theme’. Later on, we even get a 3rd one, ‘’Owen’s Theme’’. The first two themes couldn’t be more different. ‘Zoe’s theme’ is beautifully played by the composer himself on classical guitar and is some sort of intimate melody, it stays in your head for a while when you hear it for the first time. It gets back in several other tracks like: “Zoe & Rick”, “Those Eyes” and “You Kept Me Alive”.
“Clownface’s theme” is much more creepy and frightening ofcourse. It even reminds me a tiny bit of those old classic monster movies: heavy, dark, bombastic, in a dark abyss of madness. This theme also gets back and even more frequently than “Zoe’s Theme” and in a bunch of very different variations. There’s even a music box version in “Pretty Face”, some hints of it in “Encounter”. In fact our main character’s theme is all over the album, if you listen carefully though. If you want to hear him in full glory, you should listen to rightaway to “Party Massacre”. It’s truly creepy. The theme gets back and it’s a nice long track with weird effects, banging orchestral hits and Hess did some experimentation with traditional instruments and that’s really something I’m very keen of, when you hear some kind of instrument without having a clue which instrument has been used to get that sound. You could get really surprised what you can get out of a normal piano or traditional violin, etc...
“Owen’s Theme” on the other hand doesn’t get as much attention, but the same goes for the character. He’s only a small piece of the story, but nevertheless pretty important. It starts with soft, mysterious piano notes accompanied by woodwinds in the background. It sounds pretty mysterious and you really don’t know what to expect yet. It’s also a bit more simple than both other themes, which are really well elaborated.
There is also non-thematic material that sounds truly terrifying and creepy, like some chilling sound effects, a distorted piano, a lot of low strings, heavy banging percussion, and so on. Enough material to keep the listener focused.

So, to conclude this review:
Clownface is one hell of a trip (almost litteraly) and I mean it in a good way, obviously! It has everything such a movie should have. Is it easy to listen? Hell no! And it shouldn’t be! As no other horror movie should be easy to listen either. It is frightening, at moments even terrifying, it creeps under your skin and drags you into a world of madness. The world of Clownface!

After great critical acclaim for Hess’ music on the movie Carnival Of Sorrows, wich earned the movie an Award for best feature film and best musical score at the LA Film Festival in 2018, Hess now returns for another, even richer score to the 2019- slasherfilm CLOWNFACE wich just recently won its 3rd(!) Award at the Latitude Film Awards
This time around Hess goes even bigger with instrumentation and multi layers of sound and ambiance. For this slasherflick Hess composed a beautiful and melancholic theme for its lead character ‘Zoe’: with accoustic guitar he approaches the start of the movie with a warm and tender feel to it. The theme returns two or three times, but always with a little twist.
For the theme of the antagonist and titulair character ‘Clownface’ we hear the dark and threatening low key arrangement that for any listener tells us all we need to know: a dark, twisted and above all deadly presense is hovering over the teenagers that all too soon start to dissappear in the old fashioned 80’s slasher-way. Hess uses both acoustic and electronic instruments, that colour every track with a kind of freshness and surprise. At times you feel like you’re recognising little pieces of music that remind of Steve Jablonsky’s Texas Chainsaw Massacre (2003) Marco Beltrami’s Scream (1996) or even John Carpenter, when it comes to ‘Zoe’s Theme’, that of being a simple but recognisable piece of music.
The score to CLOWNFACE consists of 29 short tracks, but with one longer piece to build tention and really getting into the vibe of the scene, wich happens to be a complete group of party people getting offed by the psycho: ‘Party Massacre’ has synth strings, cello, pizzicato, percussion all blend into a 6:06 min. sequence. The shortest track, ‘Game On’, with a total of only “0.23 seconds has to be the ultimate nodge to the 80’s. With its old school-style synth/percussion it’s like a brief moment of joy throughout the dooming vibe the album depicts. All hell breakes loose on ‘Failed Attempt’ like a big cluster of whaling strings, heavy drums and sizzling sharp sounds that build up to a climax.
Hans Michael Anselmo Hess mentioned in an interview once, how much he enjoys composing multi layered pieces of music that can bring every listener their own experience on what could happen in that particulair piece of music and even making music that is strong enough to stand on its own.
My overall conclusion to CLOWNFACE: the composer seems to have been given more carte blanche in choosing the instrumantation, wich results in a bigger than life power-score, with this time more accoustic instruments like cello, guitar flute and a rich full soundscape that keeps you on edge throughout the whole album. There were a few moments where Hess’ score almost sounds too grand for the images of the movie it was composed for. But it also gives the movie some extra cache ( who remembers Christopher Young’s contribution to ‘Hellraiser’ (1987) and ‘Hellbound: Hellraiser II (1988) that provided more impact then it would have had without his beautiful and iconic score) That same class and energy, Hess brings to CLOWNFACE.