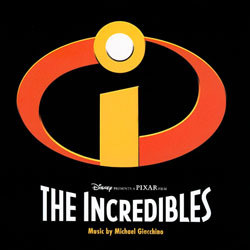 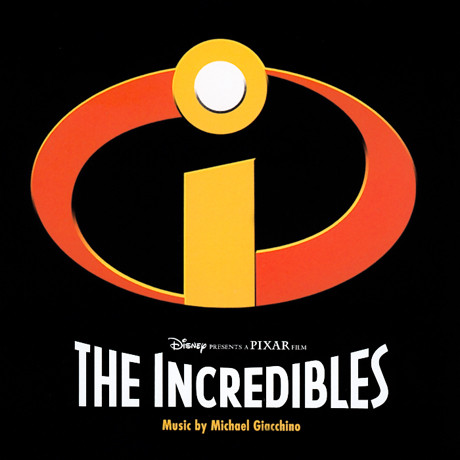 Hide reviews in other languages
The Incredibles - 10/10 - Review of Tom Daish, submitted at 2010-09-11 09:30:01 (English)
With The Incredibles, two extremely talented gentlemen get the chance to reach the kind of audience they deserve. Director Brad Bird is almost an animation folk hero for his superb Iron Giant, which Warner Brothers advertised so abysmally that almost nobody saw it, despite being one of the finest animated features of the last decade. Also proving that great animated films do not always have to include songs (instead, a sublime score by the late Michael Kamen) or be technically ground breaking to be terrific entertainment. On the other hand, anyone who has followed his video game scoring career knew that one day Michael Giacchino would get picked by Hollywood for a feature and fortunately, Bird and Giacchino pair off for what will probably be their breakthrough feature at Pixar - a studio so successful that it could pretty well hire anyone - for a film that breaks the Pixar buddy formula, but resulting in something even more sophisticated.
Where Shrek looks more and more the one off for Dreamworks (Shark Tale was a multi coloured bore), Pixar seem able to mix amazing imagery with top rate story telling and characters. The concept of a superhero family forced to live a normal life due to the expense of litigation by those saved and injured or not wanting to be saved is as clever as it is amusing. Added to that is the familiar dynamic, the humour and of course, no superhero movie is complete without some knock out action sequences. Even though Zemeckis' Polar Express purports to be more realistic, the expressive range of The Incredibles is far more convincing and the 'cartoon' character design isn't an issue in any way. John Barry was originally on board for the score, a shock to be sure, but less of a shock when he left the project. However, that early news, plus Barry's On Her Majesty's Secret Service in the trailer strongly suggested the direction Bird was going musically, that being more a Bond style action/thriller score than swaggering Superman style heroism.

In a rare event, I managed to catch The Incredibles at the cinema before hearing the CD and must admit that only a few moments grabbed me in the film itself. One major reason is that Giacchino's main theme isn't hugely attention grabbing, nor is it trundled out every five seconds - it's a score that filters the Barry/Bond style through Giacchino's own sensibility, but without an equivalent to the Bond theme or theme song to rely on, isn't as immediately arresting. That Giacchino is able to maintain such strongly structured tracks based on jazz influenced ideas, bouncing percussion and wild brass (some of the more outlandish moments almost recall Elliot Goldenthal) ensures that there's never a dull cue. Also, little moments such as the breezy swagger of Life's Incredible Again, the ominous Kronos Unveiled or the terrific suspense of Marital Rescue give it a level of charm and sophistication that so many scores miss these days. These are the kind of thing that make Barry Bond scores classics but David Arnold ones mere imitation (even if he started off on the right track).

Naturally, the action is vibrant and exciting; early highlights include The Glory Days and the stomping excitement of Bob vs. The Omnidroid. Things hot up even more toward the end, notably the breathless 100 Mile Dash (a highlight in the film too), Road Trip and Saving Metroville. Giacchino doesn't pile it on too thickly and so remains exciting without blasting the listener into submission. It's true that the brazen brass have great impact, but any composer who can make the woodwind an integral part of an action cue (as in Road Trip) is one with a light touch and a good head for orchestration. Undoubtedly, a few will be a little disappointed that Giacchino doesn't lean on Williams for this score; I rather suspect it's that aspect that keeps his fans coming back to his video game efforts, but the retro swagger of The Incredibles is irresistible. It would be nice if there was a bit more Giacchino at times - the Barryisms are expertly handled and far from shameless knock offs, but it's definitely a score specifically written to suggest a composer/genre/period than one purely from the composer's own mind. Still, terrific fun and another excellent addition to the Pixar musical lineage (and a change from a Newman for once). Giacchino and Bird have finally hit the big time.
The Incredibles - 10/10 - Review of Jason FLZ, submitted at 2011-04-11 01:06:16 (English)
In Hollywood today, there is almost no composer as versatile and original as Michael Giacchino. Personally, he has become one of my favorite composers, and has repeatedly impressed me with his scores to films like Up and Star Trek. But among Giacchino's scores, my favorite has to be The Incredibles. The movie itself is also considerably one of Pixar's best. Taking a cue from the movie's visual style, Giacchino crafts a jazzy, fast paced and fun animated film score. The main theme itself is reminiscient of all the heroic superheroes of the past with hints of saturday morning serials from the 40's as well as James Bond's famous theme. The Incredibles just shows exactly how good Giacchino can pull off for a film like this.

'The Glory Days' sums up the whole album in 3 minutes. Opening the track is a bold, brassy statement of the main theme which expands into a jazzier variation (heard again in The Incredits). The second half is a sly love theme between Mr. Incredible and Elastigirl and it sounds jazzy and mysterious all at once, capturing a true 40's feeling. Giacchino also plays around with a secret agent style, using more quiet and mysterious orchestrations. These can be heard primarily in 'Adventure's Calling' and 'New And Improved' (not to mention a suspenseful build in 'Lithe or Death'). After a strong opening, the album decides to have a little fun. 'Lava In The Afternoon', 'Off To Work', and 'Lifes Incredible Again' offer upbeat jazzy lounge style music that are fun and relaxing at the same time.

As the album progresses Giacchino also throws in alot more darker material to balance everything out. 'Kronos Unveiled' is offers up the main theme for the film's villain, Syndrome. The theme itself is suitable for a James Bond villain. Saxophones and trumpets slowly (and effectively) build as the track progresses, finally exploding into a roaring brassy and percussive conclusion. 'The New Babysitter' also offers a more action styled take on the theme. Speaking of action, what's a superhero score without action? When the action music gets pumping Giacchino pulls out all of the stops. 'Bob vs. The Omnidroid', 'Road Trip', and '100 Mile Dash' all feature heroic bursts of the main theme as well as tumbling trumpet solos. 'Saving Metroville' captures all of the various themes in a 5 minute track which is sure to get anyone's adrenaline pumping. The album is concluded spectacularly with 'The Incredits'. Here, Giacchino wraps up all of his themes in several different jazzy variations in one 7 minute long suite.

In my opinion, The Incredibles is easily Giacchino's best effort not only with the animated genre but with any film. He manages to perfectly capture the feeling of taking a journey with a family superheroes but still managing to be bold and mature about it. The album starts off great, and never slows down. Giacchino also knows how to keep the pacing up by switching from lounge music, to mysterious spy themes, to explosive action pieces. A great film and a great score.
The Incredibles - 06/10 - Review of Andreas Lindahl, submitted at 2008-01-20 21:25:40 (English)
For many years Randy Newman was Pixar's composer of choice - their court composer, if you like - writing successful scores for the two Toy Story films and Monsters Inc. Pixar, however, searched for a totally different sound for Finding Nemo and gave the job to Randy's relative Thomas Newman instead, who also composed a highly praised score. Nothing surprising so far - two top of the line composers writing memorable music for big budget films. Pixar's latest choice however is more surprising. This time the gig went to composer Michael Giacchino, probably best known for his excellent scores for the Medal of Honor games, but with no major film on his resumé. A rather daring, but excellent, choice, one must say. So, how did he do?

He did quite well, actually. The Incredibles is groovy, brassy and jazzy, evoking slick adventure music from the sixties, with more than one nod to Barry's classic Bond sound. It's tongue in cheek and lots of fun, at times pretending to take itself seriously. It's mostly a rather exciting ride, with bold brass fanfares ("Bob vs. the Omnidroid") with occasional appearances of more "cool" music, such as the groovy, big band sounding "Life's Incredible Again", or the jazzy "Off to Work", which features saxophone and flute, supported by strings, piano, muted trumpet and soft percussion. Very smooth! Some softer, more laid back underscore can be found in tracks like "Kronos Unveiled", which builds from really soft "sneaking around" music, to a brassy and very dramatic climax. "Marital Rescue" is a cute little suspenseful march, dominated by snare drums and muted trumpet, relying more on rythm than on melody.

The score gets a little uninteresting from time to time, with some cues dominated by pure underscore - a common problem when it comes to scores in this genre. "Lithe or Death", for example, has some pretty dull music in the middle, but luckily gets more interesting towards the end, just in time for the brass and percussion packed "100 Mile Dash", with its racing strings, shrieking brass and jazzy finale. The groovy "Saving Metroville" and the end credits cue "The Incredits" (ha ha) - lots of big band music - are some of the score's absolute highlights, actually reminding me of the already mentioned Randy Newman from time to time. And Barry. Really good. Especially the latter one.