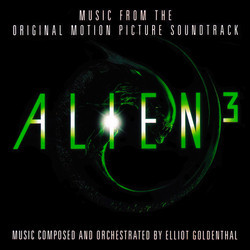 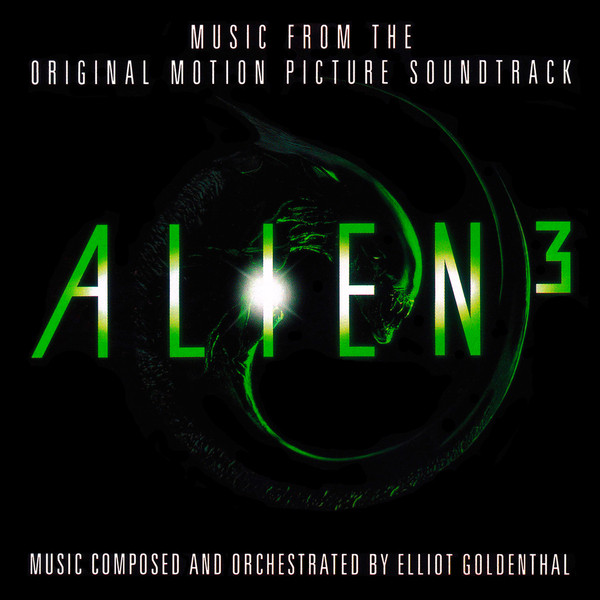 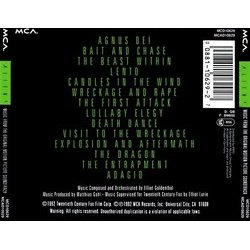 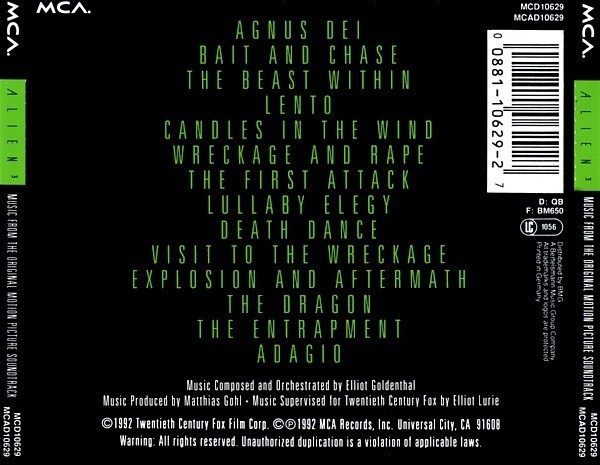 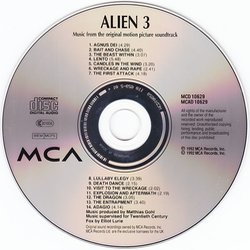 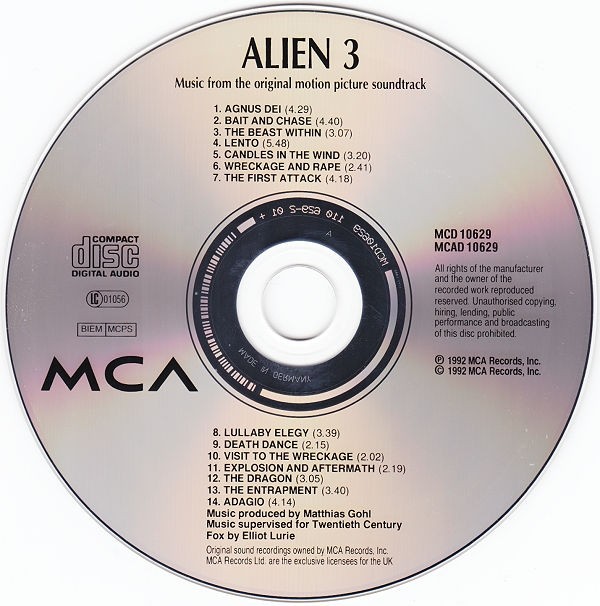 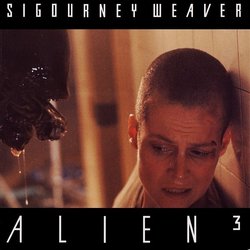 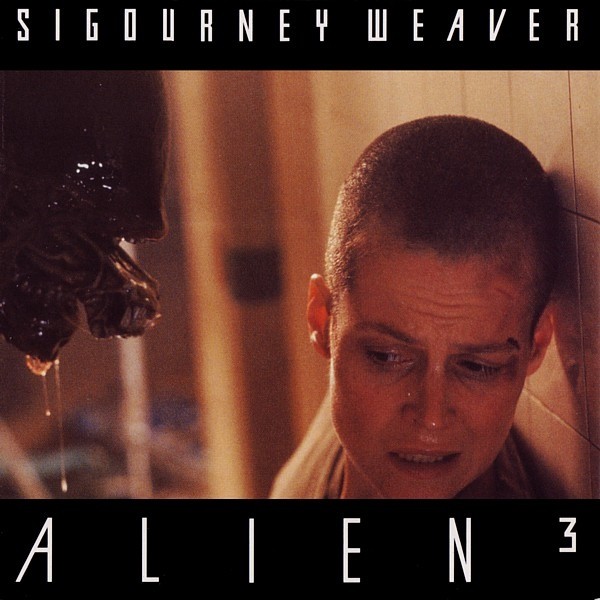 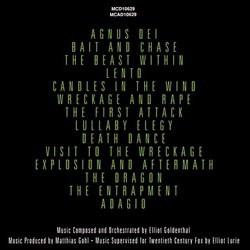 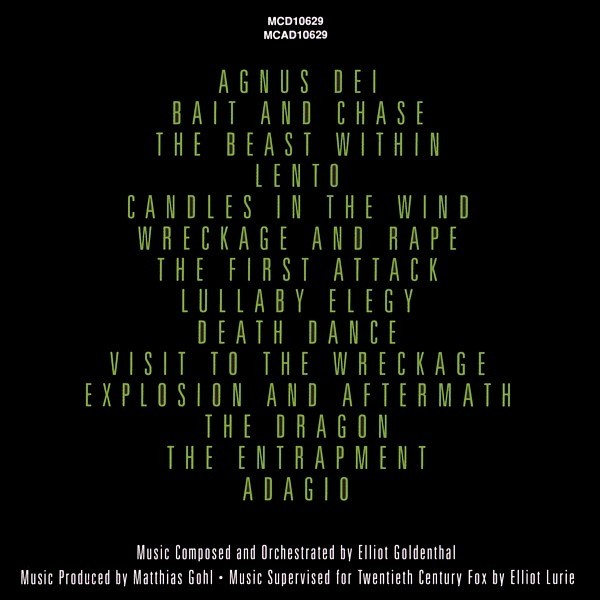 Show reviews in other languages
Alien³ - 08/10 - Review of Tom Daish, submitted at 2010-09-11 09:36:41
The Alien films have shown the value of a different creative team driving each episode for a different look and feel to each installment. After Ridley Scott pushed the boundaries of sci-fi horror, James Cameron turned up the benchmark on action films, albeit with plenty of scares thrown in for good measure. David Fincher came from almost nowhere to direct the third installment, which was not nearly so well received. Having seen all three films several times, Alien 3 does come across as the weakest as it's neither as terrifying as the original nor as thrilling as the first sequel. Despite that, there are some effectively creepy moments and the set design and cinematography are particularly stylish. Add to that some terrific performances from not only Weaver, but Brits Charles S Dutton and Charles Dance and you get a very much above average sci-fi, horror thriller. The benchmarks were high and the fact that Fincher's effort wasn't received so well isn't too much of a surprise. Third films in trilogies (as it was then, at least) seem jinxed, take Return of the Jedi or The Godfather 3 as notable examples.
Anyone who read my original review of Elliot Goldenthal's score will know that I wasn't exactly a fan originally. Fortunately, tastes evolve and the quality of his writing is something I certainly appreciate a lot more. This is not to say that the score is one that you enjoy as such, although there are some quite melodic and engaging moments mixed within the disturbing orchestral effects. The opening couple of tracks are certainly typical, mixing indecisive orchestral patterns with subliminal synth effects, one of which obviously mimics the alien running skittering across a hard floor, almost functioning as a sound effect. Lento is the first of two cues that I can't possibly imagine that several years ago, even with my infantile film music tastes, couldn't possibly have inspired me. Lento starts with the now much overused boy soprano over subdued strings, although I suspect this might have been the place where the trend started. This acts as the introduction to a prototypical piece of Goldenthal with arpeggio strings over striking horn chords. One of the most musically effective moments of the film as the giant vents of the factory open with Goldenthal's music playing over the top.

The final track, Adagio, as Ripley makes a final sacrifice has a distinctly euphoric feel. I suspect Fincher wanted to take the religious symbolism of the moment to the same extreme with the music and it does almost take on the sound of a Biblical epic. Much of the music is almost impossible to describe and must have taken a lot of imagination on Goldenthal's part. As an extremely amateur composer, I find it hard to imagine how one much conceive this type of music. It has a very free structure at times and much of it is so subdued, the effect in the film is more subliminal than obviously sign posting the next shock. There are a few violent outbursts, Wreckage and Rape is particularly vicious with brass instruments played in a most unconventional manner and totally unlike anything else I can recall. The First Attack mixes what I can only think resembles some kind of thrash metal type writing with guitars played mercilessly over the orchestra. The mixture of styles Goldenthal employs is fairly eclectic at times, although the tone of the score still remains consistent. One notable technique are looped brass or string notes that formed the backbone of Don Davis' recent score to The Matrix, a connection between the two scores I'd never really made before.

Both Jerry Goldsmith and James Horner had their music virtually decimated in the films and Goldenthal has said that the film was forever changing during the time he was composing. The album order is almost certainly nothing like that of the film and I recall the music in the film often being somewhat more 'normal' than much of the album, at least in the sense that it was more melodic and less skittish. Not an easy listening experience by any means and probably more challenging than either those by Goldsmith, Horner or for the fourth installment, John Frizzell. This won't be to everyone's taste and I'm still not convinced it's the masterpiece it is often painted to be. However, whoever says that modern film music can't be challenging or inventive should have a listen to Goldenthal's work as it contains some of the most inspired ideas in years.
Alien³ - 09/10 - Review of Jason FLZ, submitted at 2011-04-16 20:00:45
By the time Alien 3 rolled around the series had made it's mark on cinema. The impact of the previous two films, both uniquely diverse by equally creative and original, had proved that sci-fi was something that could be taken seriously. The music had also hit a good mark as well. Both films were scored by two strong composers who each offered something new and creative. Then along came flourishing composer Elliot Goldenthal. Ironically, the production for Alien 3 was troubled as well. Changes in the the script during production caused numerous scenes to either be deleted or re-shot. The finished product was a mess, and was almost unidentifiable from the director's cut version. Goldenthal suffered a few setbacks from this but managed to still deliver one of the best scores in the series (nearly topping Goldsmith). The music for Alien 3 is as strange and diverse as it's predecessors and is just as technically complex.

Goldenthal really does craft a unique score for Alien 3. As opposed to the previous scores of focusing on orchestra, Alien 3 manages a combination of dark ambience, harsh electronics, odd synth noises, and some beautiful orchestration. The tone of the film is identified immediately in 'Agnus Dei'. The track is a mix between synth and powerful choral moments before exploding into one last orchestral statement and then retreating into a solo female voice. The choir returns in the track 'Lento'. The track also introduces two of the main themes for the film. First is the brassy motif that also accompanies shots of the prison in the film and holds a menacing feel. The second is a beautiful and sad orchestral moment that is hard fully in 'Adagio' later on. Some really great orchestration also add to the quieter moments of the album in; 'The Beast Within', 'Lullaby Elegy', and 'Visit To THe Wreckage'.

Despite some very nice, quiet moments in the score, Alien 3 also contains some of the darkest music in the series. Goldenthal uses pounding percussion and brutal synths to capture scenes where the alien attacks. 'Bait and Chase' is basically slashing stingers and creepy unearthly sounds mixed with a distorted orchestra. Occasionaly, such as in 'The Dragon' and 'First Attack', Goldenthal uses heavy ambience and brief appearances of electronic sounds to represent the beast. In 'Death Dance', 'Explosion and Aftermath', and 'The Entrapment' Goldenthal employs brooding orchestral moments (as well as a unique violin solo in the latter). One of the most interesting choices in the album comes from 'Wreckage and Rape'. The first half of the song starts out as a quiet melody which then bursts into a harsh heavy metal piece complete with wailing voices and growling guitars. Why Goldenthal did this is beyond me but it sure is an interesting choice. The album concludes with a highlight, 'Adagio'. The theme itself is on the scale of some of the best composers in Hollywood. In the first quarter of the song there is a slow buildup which segues into the second half, a somber melody representing the choice Ripley has to make. The third part of the song is the most powerful, exploding into a full orchestra for the first time and ending off on a massive heroic melody. The last quarter of the song is a throwback to Jerry Goldsmith's music in the first Alien. It's a slow trumpet solo that plays alongside Ripley's last message.

Elliot Goldenthal made his major breakthrough with Alien 3, and it's not hard to see why the album is so well received. The combination of electronic and orchestra is very effective and when you hear it on album it's hard not to be impressed with what he did for the time. The film itself failed critically but, despite claims of it being the last film in the popular franchise, spawned a sequel. Fortunately, Goldenthal's music still holds up and is as dark and intense as it was in 1993. In my opinion, the music is just as good as Horner's entry, and close to being on par with Goldsmith's music. One problem, just to be critical, is with the amount of ambience. For some people, the score might be unlistenable as there is alot of harsh electronic work, random heavy metal, and quiet synth moments. Definitely one of the best entries in the series and a good starting point for Goldenthal.
The music of this soundtrack was used in:

The Matrix (Trailer)
The Village (Trailer)