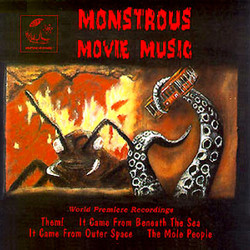 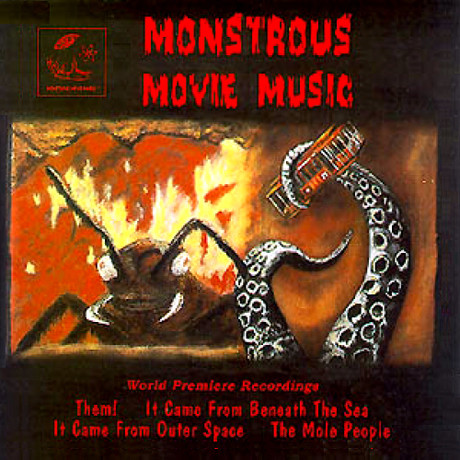 Monstrous Movie Music - 09/10 - Review of John Mansell, submitted at 2012-05-06 22:30:31
Music from no less than four classic tales of sci-fi horror, that include the musical inputs of some seven composers. The disc commences with three brief but worthy cues from the 1956 movie THE MOLE PEOPLE. Musical duties for this particular film were the responsibility of Herman Stein, Hans J. Salter and Heinz Roemheld; the latter being responsible for the score to ALL QUIET ON THE WESTERN FRONT for Universal studios in 1930. Roemheld was also involved on a number of cues for GONE WITH THE WIND, which included the dramatic and driving music that accompanied “The Burning Of Atlanta” but he received no credit for his work on the movie.

The music for THE MOLE PEOPLE is, I suppose, somewhat typical of the scores that were being composed during that period for the veritable onslaught of sci-fi/horror movies that were being produced by Hollywood. But there was one difference with this score; it was actually an original work, composed specifically for the picture, whereas many of Universal's other productions had music cues from other movies tracked onto their soundtracks. I have heard THE MOLE PEOPLE on one other occasion on a disc, and that was by Dick Jacobs and his orchestra, but this version is certainly more faithful to the original. Music from the movie THEM is the next selection and we are treated to eleven cues from this tale of mutant giant ants that go on the rampage and end up in the sewers below Los Angeles, where they are eventually destroyed! I remember seeing the movie as a child on TV, and then later at one of those all night cinema shows that were popular during the late 1970s, where a number of films were shown through the night. I must admit that I actually felt sorry for those ants. The music for the movie was written by Bronislau Kaper who went on to compose the stirring and memorable soundtrack for MUTINY ON THE BOUNTY along with a number of other well thought of scores such as LORD JIM, THE WAY WEST and HOME FROM THE HILL. Kaper’s music is most definitely in the category of true classic sci-fi horror, and is arguably of the genres finer examples. It is a pity then, that the composer did not get an opportunity to make a return to this particular type of movie, as his writing skills were well suited to the genre. One of the highlights of the score has to be the urgent and fraught-like sounding “Military Takes Over/Through The Tunnels”, which is track number 12 on the disc. The next section on the CD is made up of 14 tracks from the excellent score for IT CAME FROM OUTER SPACE, which have a combined running time of just over 20 minutes. Released in 1953, the movie has the united creative talents of Henry Mancini, Irvin Gertz and Herman Stein working on the music and the pooled artistry of these accomplished musicsmiths certainly paid off for the picture. I personally think that this is the best section on the CD but I cannot fault any of the music from the other movies that is included on the compilation.

The final section on the disc is made up of music cues from the 1953 production, IT CAME FROM BENEATH THE SEA. Music is provided by Mischa Bakaleinikoff and the sections run for just under 10 minutes. The Russian born composer penned a suitably dramatic and mysterious sounding work for the picture that relies heavily upon the use of rasping brass and highly charged strings which enhance perfectly the story which is unfolding upon the screen. There are also a few lighter moments within the score but these are brief interludes within in score that is dominated by tense and enigmatic sounding compositions. On “Love By The Sea” the composer utilises a solo violin, played in almost a gypsy style, which is as surprising as it is fleeting within a score such as this. Many of the cues in this particular section are very short and many of them seem to melt into each other, but this makes for some great listening, and just adds more to the enjoyment of the music. Tracks 38 through to 42 are billed as bonus material, and are varying versions of cues that have already been heard on the CD.

Overall this compilation was a joy to listen to. It was wonderful to hear the sounds of an age that we will most definitely not see or hear again, unless of course we sit up late and catch it on cable. The performance of the music is marvellously authentic and the orchestra should be congratulated for their excellent work, as should the conductor. The CD is presented extremely well, with interesting, informative and above all easy to read notes by David Schecter. The booklet is so thick that I actually had trouble getting it back into the CD case after I had finished reading it. This collection definitely gets my vote. Please note that no ants were harmed during the writing of this review.