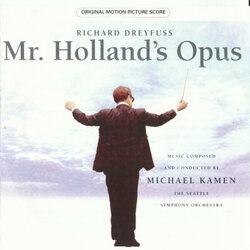 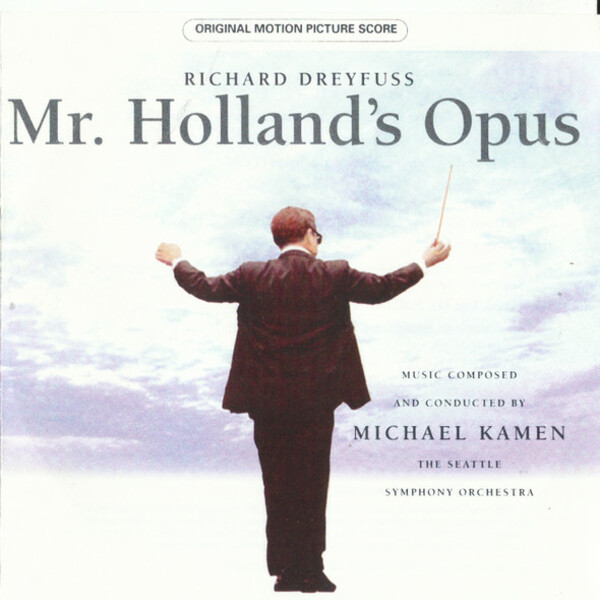 That is what the film Mr. Holland’s Opus is all about – to make music a passion, something that you do with your heart and your feelings, not mechanically. That is what music teacher Glen Holland tries to tell his sometimes unmotivated classes. He tries to motivate them to get an interest and passion in music, not just something they do in school because they have to. And he succeeds. He found a way to make a difference.

But Glen Holland also had a dream – he wanted to compose symphonies. All his life he has worked on “An American Symphony”, his magnum opus, but then one day he realises that his life and his career has passed by and his dreams has drifted away. His life went by while he was making other plans. But, as a wonderful finale to the movie, as Mr. Holland is being retired, his old students reunite to form an orchestra for him to finally perform his “American Symphony”. A very moving film scene, lifted to the skies by the music that is played – “An American Symphony” – a piece written for the film by Michael Kamen.

For a film that is essentially about music, like Mr. Holland’s Opus, the score is of course extremely important. And who could fit the task better to score such a film than Michael Kamen? Considering the result, apparently no one. Kamen delivers a wonderful emotional drama score, with a rich body of themes and many heartbreakingly beautiful moments, as well as one or two of grand adventurous splendour.

The score opens on a very high note, with “Mr. Holland Begins”, an adventurous cue that would fit just as perfectly in an adventure movie. Actually, a part of this cue sounds very similar to a part of the main theme from Kamen’s Robin Hood. The cue begins with quiet piano, but then bursts into a heavy timpani rhythm, leading into a full orchestral performance, led by horns, of one of the score’s main themes, the wonderful theme for Glen Holland himself. A very spiritual and energetic beginning to this score.

And Kamen gives us an absolute wealth of themes in Mr. Hollands Opus – there are at least four major themes, which are frequently represented in the score. Kamen has used the leitmotif technique in Mr. Holland’s Opus, and the main themes as well as many minor themes appear and reappear all over the score. We have the aforementioned wonderful, spiritual theme for Glen Holland, which also gets a very romantic reading in the beginning of “Practice, Practice, Practice”. There is a love theme for Glen’s wife Iris, heard first in “Iris and Glen” on solo piano, and there is another, much more sad and melancholic love theme for one of Glen’s students who falls in love with him, presented on solo cello in “Rowena”. And finally, there is perhaps the strongest and most beautiful theme in the score, the theme for Glen and Iris’ son Cole. It is hard to describe in words how beautiful this theme is, but I can say that it surely will make you close your eyes, closing out the world around you, and just fall into this wonderful theme. It is that good. It is presented fragmentarily through the first half of the score, but gets developed in full in “Cole’s Tune”, in a wonderful flute solo by Jonathan Snowden. This track is one of those perfect Kamen pieces where absolutely nothing can be changed, where every note is in the right place. A track can’t get better than this. One of the Kamen pieces to treasure as his legacy.

Anyway, the score is throughout rather varying, with its moments of both emotional power, be it sadness (“Rowena”, “Vietnam”), happiness (“Iris and Glen”, “New Baby…”) or sheer beauty (“Cole’s Tune”), its playful moments (“Rush to Hospital”), and moments of joyous energy (“Mr. Holland Begins”, “Practice, Practice, Practice”). The thematic work is wonderful, themes being played out against each other all the time, in various orchestrations and moods. The way Kamen changes between themes, seamlessly letting them float into each other are just wonderful – heaven to listen to.

The score is much dominated by strings and wind solos, especially the oboe, but there are as mentioned moments of brassy adventurous music, especially in the first track, in “Rush to Hospital” and in the final piece “An American Symphony”. The latter piece really deserves a little paragraph for itself. I dare to say that this is the best single piece Kamen ever wrote for a film. It gives treatment to all the wonderful themes of the score, in a very powerful symphonic arrangement. About five and a half minutes into the eight and a half-minute track a rock trio (guitar, bass and drums) joins in with the full orchestra and forms an extremely energetic, spiritual ending to the score. And that rock trio makes perfect sense – what Glen Holland used to get his students more interested in music was American rock music, claiming it to be a part of the country’s musical history. So of course he would have included in his “American Symphony”. A wonderful Kamen piece, as I said what I consider to be his best film music piece in his entire career. Needless to say with Kamen, it is all wonderfully orchestrated, using the orchestra to full capability, and that is something that can be said of the score as a whole as well. I have in my other previous Kamen reviews endlessly talked about his wonderful orchestral capabilities, and I don’t mean to stop. Michael Kamen’s use of the orchestra was one of the best in the business, and it is as evident in this score as in most of his other.

There are two classical pieces included on the CD as well – well-recorded by Kamen. Kamen also borrows a little from Beethoven in the score, in “Rush to Hospital”, which has the fitting subtitle “While parents listen to Beethoven”. More a borrow of style than any actual lifts, and it is very well done.

The CD is rounded of, after the glorious finale of “An American Symphony”, with “Cole’s Song” performed by Julian Lennon. The song is more or less a song version of “Cole’s Tune”, and is quite good. There is no reason to stop the CD after “An American Symphony” – this song works well as an “End Credit Song” for the CD.

At first glance (or rather first listen) Mr. Holland’s Opus can seem a bit dull in the middle ten tracks, due to the extreme energy and spirituality of the first and last score tracks. Well, it is true that the middle portion of the score not has the same orchestral power as its beginning and end, but after another listen, it will be very easy to appreciate Mr. Holland’s Opus for the wonderful score it is. There is no doubt, that together with Robin Hood and The Three Musketeers, this score is one of Kamen’s masterpieces, and maybe, considering the advanced use of themes and successful way of conjuring up emotions, his artistically most accomplished work.
Mr. Holland's Opus - 10/10 - Review of Tom Daish, submitted at 2010-09-28 21:55:29
As the story of a music teacher who wants to write the 'great American symphony' but gets sidetracked by a regular career, music was clearly going to be an important aspect of the Stephen Herek's film. Having just come off working with Michael Kamen for The Three Musketeers, Herek chose to work with Kamen again, but the story touched the composer far beyond the usual level of involvement. As the fictional Mr Holland was supposed to be writing his great symphony, a selection taken from it would clearly have to be performed, but Kamen wrote a work longer than that performed onscreen using themes from the underscore, fashioning them into a perfectly arranged suite.

Anyone still doubting Michael Kamen's melody writing credentials really must hear Mr Holland's Opus as it contains four instantly memorable themes. The score opens with that for Holland himself, a broad, anthemic fanfare that also forms the finale of the American Symphony. The melody for Iris is surprisingly turbulent when it appears at the opening of the American Symphony, but is ideally suited in its quieter guise, notably in Iris and Glen. Perhaps the most touching theme is for Holland's son Cole when it appears in Cole's Tune during the underscore itself, but is arranged into one of Kamen's finest spin off songs, Cole's Song which is performed with restraint by John Lennon's son, Julian. Rowena's theme is the score's most melancholy melody, but is an engagingly understated theme for a pupil who has a crush on Mr Holland, but whose advances he resists for the sake of his loving wife and son.

Aside from the cues centering on the main character themes, there are plenty of enjoyable interludes, notably Practice, Practice, Practice, a witty scherzo that is turned even more manic for the Rush to Hospital, taking in more than a hint of Beethoven along the way. On the other hand, Vietnam is a sombre soliloquy as Holland and his fellow teachers note former pupils among the appalling casualties of that campaign. Before the finale of the American Symphony is performed in the film, Thank You Mr Holland is a by turns quiet, then more celebratory finale as a farewell is staged and he is finally able to hear his life's work. The American Symphony, for its grandiose orchestral passages, remains slightly controversial due to the finale which adds drums and guitars, turning the main theme into a rock anthem. In the film, only presenting this portion does somewhat belittle the entire work's overall achievement, but the full version on disc is a great finale.

Of course, if one were to be cynical, an eight minute work shouldn't really take even an amateur composer more than a few months to complete and if I were Mr Holland I'd have finished it off and got the kids to perform it - I know I'd have much rather played some Michael Kamen in my school orchestra than massacre yet another piece of obscure classical music. The funereal march from Beethoven's 7th and the more lively Concerto for Three Harpsichords by Bach are both included on the album and receive fine performances. Of course Kamen's music doesn't quite match up to works by two of history's most important composers, but Mr Holland's Opus still remains Michael Kamen's most engaging and passionate score and for that reason an essential in any collection. A great score that sums up everything that is great about Michael Kamen as a person and a composer.