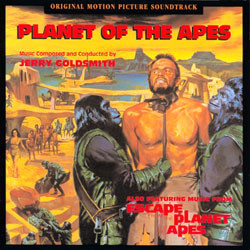 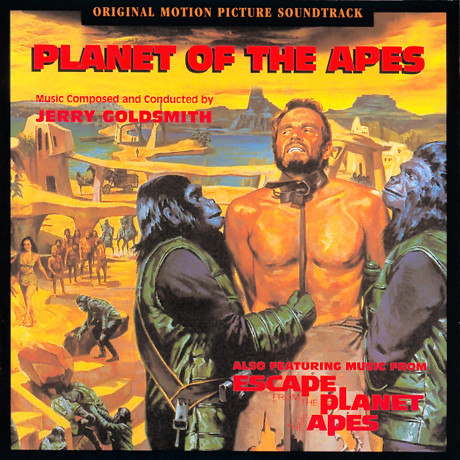 Planet of the Apes - 10/10 - Review of Adam Andersson, submitted at 2008-01-20 21:25:40
My little series of reviews remembering Jerry Goldsmith continues, this time with one of his most special and innovative scores: Planet of the Apes from 1968. This score marked the second collaboration between Goldsmith and director Franklin J. Schaffner, a relationship that would ultimately end up with no less than seven collaborations over the years, including such renowned efforts as Patton of 1970, Papillon of 1973 and The Boys from Brazil of 1978. Planet of the Apes was one of their most critically (and financially) acclaimed works, and the score is indeed very unique, harmonically using 20th century avant-garde techniques, and utilising an unusual array of instruments, for example the ancient ram’s horn and something so unusual as metal mixing bowls used as percussion instruments.

I must admit that when I first saw Planet of the Apes, as a new film music collector, and saw the name Jerry Goldsmith in the titles, I was expecting something entirely different than what I heard. I was expecting the Goldsmith I had heard earlier – the Goldsmith of Star Trek, First Knight and The Mummy. But this was indeed something entirely different. At the time I found it a good underscore which accompanied the screen imagery very well with its “primitive” sound, but nothing I could imagine listening to out of the film. But a couple of years passed, and I reconsidered: I bought the score. And after a listen or two it stood clear to me that what I had in my hand is one of the most unique works in film music history – completely original and extremely effective. Planet of the Apes is a masterpiece and nothing else.

While the score actually has a thematic base, as described in the liner notes (which are excellent), this is not a score that will occur to you as thematic in any way. The music mainly conjures different effects by using the palette of the symphony orchestra in different ways, and while the thematic material is reoccurring, it is not easy to identify. What unites the score is the avant-garde style, and that unity is a strong one. As a listening experience, the score is a very coherent work, albeit somewhat exhausting. It is not easy listening. Nevertheless, its complexity is compelling and will surely catch you in the originality of instrumentation and sound effects this score offers.

The score alters between being a very atmospheric work with echoing pizzicato strings and percussion together with moody high string lines, and a rather heavy rhythmic action work, with blaring horns (blown without mouthpieces!) and piercing trumpets. The piano is much used as well, often with a very complex part, performed on the score by Goldsmith’s piano teacher, Jacob Gimpel. And then there are the aforementioned exotic instruments, the ancient ram’s horn, and the Brazilian wind instrument cuika which is used to mimic the hooting of apes. As I already have said, Goldsmith’s instrumentation in this score is completely unique and extremely effective, giving the needed primitiveness to the music. Wooden percussion is also favoured, and the standard symphony orchestra is of course used to full extent as well, together with all the exotic and unconventional instruments utilised.

The influences of early 20th century composers, especially Stravinsky and Bartók, are very clear at many occasions, but the final touch is ultimately Goldsmith and nothing but Goldsmith. The same harsh character that dominates many of Alex North’s scores can also be clearly detected in this work. North was indeed a large source of inspiration for Goldsmith.

Lifting out particular tracks of interest is hard, this score being the coherent mass of music it is. But “The Hunt” with its driving rhythms and the rich use of the cuika is definitely one of the score’s highlights. For the interesting effects of the metal mixing bowls, “The Searchers” is a piece worthy of mention. There are also plenty of calmer moments in the score, like “A New Mate”, with some eerie string lines and soft bells, and “The Cave”, with wooden percussion and the same eerie strings that appear all over the score. But there is no such thing as melodies in the normal sense of the word in these calmer moments either; the score is atonal and atmospheric as always. But it does never get boring, at least not in my opinion – the varying use of the orchestra always offers something new in each track, and you never really know what awaits you. And this makes for a great listening experience – when you are in the mood for it.

Included on this album is also a suite from Goldsmith’s score to the 1971 film Escape from the Planet of the Apes. This score is very different from the original Planet of the Apes score though – but still inevitably a Goldsmith score. First of all – it is more “modern” than the first score, opening with an electric bass rhythm and a theme on electric guitar. And while Escape also contains some of the avant-garde action music that dominated the first score, Escape is a much more intimate and thematic score. In the middle of the suite there is even a beautiful, somewhat melancholic love theme on guitar, for the film’s protagonist ape couple. Even though Escape from the Planet of the Apes not even nearly rises to the heights of its predecessor, it is still an interesting score and a very nice inclusion on this album, exemplifying a more contemporary style of Goldsmith’s scoring.

All in all, this is a wonderful album. Planet of the Apes is one of the most original works of all film music, and the experience of it in this complete form is the experience of a masterpiece. It needs concentration to really get into, and can definitely be very hard to digest for many, but once that threshold has been passed, Planet of the Apes can be enjoyed for what it truly is: One of the most innovative film scores of the 20th century and one of Jerry Goldsmith’s most accomplished creations.
Oscars: Best Original Score (Nominee)