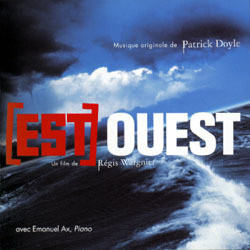 Show reviews in other languages
[Est] Ouest - 08/10 - Review of Tom Daish, submitted at 2010-09-10 23:16:44
After completing scoring duties on his fantastic score to Great Expectations, Patrick Doyle was suddenly diagnosed with leukemia. This was obviously a huge shock to him and his fans, however he survived, even managing to compose his (as yet not fully released) score to the animated feature Quest for Camelot. To the huge relief of lovers of his fantastic music, he has recovered and has now returned to writing more of the splendid music that has put him at the top of the list of today's best young composers.

EsEst Ouest is his third collaboration with French director Regis Wargnier and while I wouldn't necessarily put his two other efforts as Doyle's absolute best scores, they have none the less been his finest work outside of working with Kenneth Branagh. EsEst Ouest is a French film about an escape to the West from communist Russia. Of course, the great slavic composers such as Tchaikovsky, Rachmaninov, Prokofiev and at least another half a dozen other greats, were invariably associated with a similar time in history (perhaps a little before I suppose) and so their music was often commissioned by the Tsar (or whoever, I'm no historian) to commorate Russia's greatness. Doyle, of course is far too good a composer to merely emulate these leading romantic composers, but their dynamic presence can be felt in the style that Doyle uses. Most notably in the sections which feature virtuoso pianist Emanuel Ax; Rachmaninov perhaps being the obvious model. Indeed, Rachmaninov's love of making the pianist charge up and down the piano is present in several key passages of the score.

The Opening Titles are fairly portentous, while remaining well below being horribly overblown, featuring bold horn and brass parts that introduce the main theme. This is also performed in a much more romantic, but ultimately melancholy way several times through the score. While it's a lovely theme, I wouldn't honestly put it down as one of his most memorable, it is too quietly complex to just stick out hum along memorable, but sets the tone of the film splendidly. Along with that are the usual rolling string arppegios that Doyle is so fond of, but in this instance reflect the movement of the sea rather nicely; especially as many of the cues appear to be associated with water (the album cover is a picture of crashing waves). It is rather a shame, it has to be said that Doyle's ace piano soloist Emanuel Ax doesn't appear a few more times as his playing as illuminates every track where it is featured. It's also nice to hear a piano part in a score that isn't done a la Gump, ie. twinkling and sentimental, but one that weaves in and out of the orchestra in the best tradition of Rachmaninov. What is even more impressive to note is that Ax performed his cues on the other side of the planet and it is a testament to the production and performance that it sounds so 'live' in the sense of the entire thing just playing as if it were a concert.

Several of the tracks feature stirring Russian songs (not by Doyle) which don't sound entirely out of place, although I think I would have preferred them all at the end since none of the rest of the score bar the final track features choir. Given Doyle's superb track record for writing choral music (Henry V's Non Nobis Domine and the songs from his bouyant Much Ado About Nothing), it does make you wonder why he wasn't asked to write songs that could have contained motifs from the score. Ah well.At least Doyle does get a chance to flex his considerable talent for vocal writing with the somewhat poignent, yet gently stirring finale song The Land. Anatoly Fokanov's name can be added to the incredibly diverse, yet top notch list of soloists that Doyle has employed to perform his scores. His rich baritone voice is just perfect and with the choir in the background makes a fitting finale to an excellent score.

I'd suggest that EsEst Ouest is not one of Doyle's high impact, easy to appreciate first time scores. The music doesn't quite reach the dizzy exhileration of his work for Branagh. I guess this what happens as a composer matures, the approach becomes a lot more complex, but in the end more fulfilling and profound listening experience. Incidentally, don't panic that the orchestra doesn't perhaps appear to be one of the world's top orchestras. The performance and recording are both excellent and the conducting is handled splendidly by James Shearman. The score and film were originally released in France, but is available more widely as Sony Classical has now given the album a much wider release. Doyle fans will love this, lurkers will certainly love moments, but may find it less of an easy listen than usual. However, definitely a great score that is definitely worth picking up.