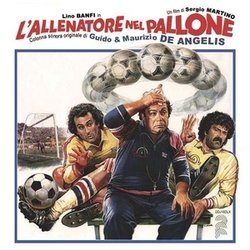 Beat Records is delighted to announce the release of the score of one of our Italian cinema holy Grail.Finally, after 34 years since the release of that wonderful film, available for the first time the full soundtrack on CD of the movie L'allenatore nel pallone (1984, Sergio Martino with Lino Banfi, Urs Althaus, Andrea Roncato, Gigi Sammarchi, Licinia Lentini, Camillo Milli), music by Guido & Maurizio De Angelis.
It’s the story of Oronzo Canŕ (Lino Banfi), an unemployed football coach that is hired by Longobarda’s president, Mr. Borlotti (Camillo Milli), whose team just arrived in the top Italian football league. On the lookout for new talent, our hero is sent to Brazil to recruit some top players. Negotiations for hiring Junior and Socrates quickly fail, and events bring Longobarda’s trainer to watch a football game on a pitch close to Maracanŕ stadium. There, aided by Giginho and Bergonzoni—two unlikely talent scouts (Gigi e Andrea)—he finds young Aristoteles (Urs Althaus), Brazilian talent of the ginga.Thus, the incredible Longobarda adventure begins in the highest Italian league, the A series, with his “B zone” scheme (inspired by the theories of Nils Liedohlm, an inspirational leader for our own Oronzo Canŕ). After an uncertain start, the team begins to score points, carried by Aristoteles’ talent, but soon problems arise that undermine Canŕ ambitions. The Brazilian talent saudade and ensuing conspiracy will be the most difficult adversities to victory for our 5-5-5 theoretical (that is to say, the players’ position on the pitch in the B zone). By the end of the championship, before the final match against Atlanta, Oronzo Canŕ will have to make a difficult decision on which the destiny of him and his team will depend.
A soundtrack lies firmly in the pop key, with carioca influences (Aristoteles’ saudade theme), easygoing cues that color the comedic aspect of the movie (such as the main titles), the wonderful “Mundialito” (already featured in some other scores but made famous by this movie) and many other sonorities, your flashback to a musical past, as pleasant as the memory of your mother’s cuddles, when you were still just a kid, and for you, “women” were just her, her hugs and her smile.
The CD is in jewel case edition featuring artwork and liner notes by Daniele De Gemini and Mastering by Enrico De Gemini. L'allenatore nel pallone

Other releases of L'allenatore nel pallone (1984):