The Fall of the Roman Empire 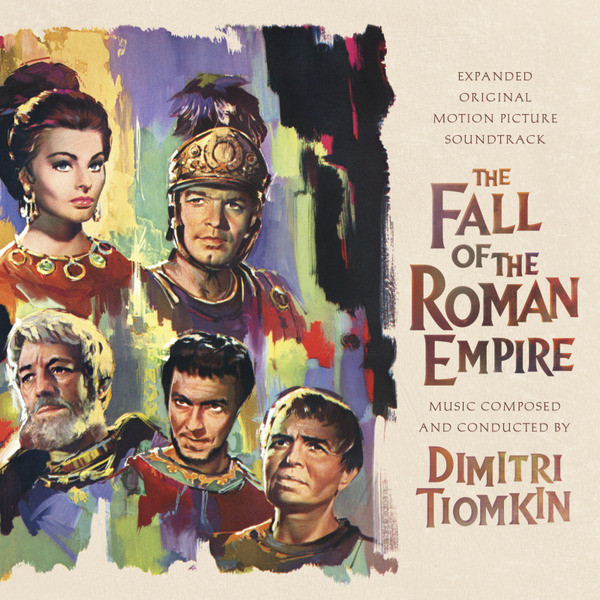 The Fall of the Roman Empire - 10/10 - Review of John Mansell, submitted at 2012-03-28 22:38:06 en
The Fall of The Roman Empire, was surely one of the last true epics to be produced. Released in 1964, it boasted an all star cast and was a magnificent and attractive movie, full of action romance and vibrant and colourful scenarios.. The musical score was the work of the multi-talented composer Dimitri Tiomkin and is a soundtrack that ingratiates and enhances this truly epic motion picture. I am of the opinion that this is one of Tiomkins best scores it is a grand affair that is brimming with surging strings, dramatic and robust battle themes, imposing and inspiring marches and poignant and heartfelt themes which are both poetic and lush in their construction and sound. Originally released on long playing album back in 1964 on the CBS recording label, Ol6050/OS2460 and later on the Varese Sarabande label on compact disc in their Masters film Music series. Plus a further release a few years later on Cloud Nine records also on compact disc, which contained previously unreleased tracks, the latter being an inferior release in the sound quality department. It has always been a popular score amongst film music collectors old and new and I am sure that this latest release on La La Land records will attract a lot of interest from collectors who already have the soundtrack as well as creating more than a ripple of attention amongst enthusiasts who have not yet sampled the music. It is one of those scores that never seems to loose its attraction or its appeal, and is as fresh today as it was back in 1964. The compact disc begins with a brief but rousing cue FANFARES and FLOURISHES, although less than a minute in duration, it is an impressive and stirring track that sets the scene perfectly for all that is to follow on this truly wonderful disc. Track 2, OVERTURE opens with an imposing pipe organ performed in classical style heralding the commencement of proceedings and announcing this epic score, Tiomkins magnificent yet melancholy and sombre sounding theme, is played over various frescos that depict the Roman age on screen as the main title credits to the movie roll, the music creates an atmosphere that is grand but also filled with an air of fragility, at once relaying the Mighty Roman Empires power and influence and also at the same time we hear and underlying sound that shows us the same Empires weaknesses and flaws. Strings take on the theme already established by the organ and carry it forward developing the almost despairing sound, they are supported by organ and also are joined by brass, all of these elements combine to create a luxurious and magnificent composition, that is lavish and opulent in its style but also has tragic undertones that really tug at the listeners emotions. Track number 3, THE FALL OF LOVE, did not actually appear in the movie, Tiomkin recorded this arrangement of the films love theme for the soundtrack album release, it is rich, vibrant and brimming with emotive content but again we hear an underlying or secondary sound that purveys a sense of the tragic.
Track 4, LUCILLAS SORROW, is heard as Lucilla (Sophia Loren) watches Caesar die after he has been poisoned.
She is overwhelmed by grief and opens the shutters in Caesars room letting in the winds that are blowing as a thunder storm rages. Tiomkins music is masterful within this sequence, heartfelt and also mysterious, the composer utilizing well Mandolins to create a shuddering almost ghostlike effect. The scene is for the most part dialogue free, thus Tiomkins music acts as a romantically laced accompaniment to the scene, giving it depth and a powerful impact upon the watching audience. There is no doubt whatsoever that THE FALL OF THE ROMAN EMPIRE, is a classic score and this particular edition of the soundtrack will I know strengthen its standing within the film music collecting community and preserve its epic and rousing themes, its sweeping love themes and glorious marches and action cues for many years to come. This is an essential purchase, adorned with wonderful art work and enlightening and highly informative notes. Sound quality too is very good for the majority of the disc, the exception being a couple of cues in the bonus tracks section of the disc, which have a background hiss in places (which was the same scenario as the cloud nine release, I am however confident that this will not spoil the highly enjoyable listening experience of this score. I urge you to purchase this, yet another gem of a release from La La Land records.
La-La Land Records and Sony Music present the remastered and expanded release of renowned composer Dimitri Tiomkin's (55 DAYS AT PEKING, GIANT, RIO BRAVO, THE OLD MAN AND THE SEA) original motion picture score to the 1964 Roman era-set feature film epic THE FALL OF THE ROMAN EMPIRE, starring Sophia Loren, Stephen Boyd, James Mason, Alec Guinness and Christopher Plummer, and directed by Anthony Mann. Mr. Tiomkin's Oscar nominated, Golden Globe winning score is among his finest - large in scope, yet uniquely brash and brimming with energy and ornamentation. Remastered from the original 1/4 inch LP master tapes in the Sony vaults and expanded with bonus mono cues, this 65 minute presentation is the most definitive, official release of the original THE FALL OF THE ROMAN EMPIRE score to date. Produced by Didier C. Deutsch and Mark G. Wilder and mastered by Mark G. Wilder, this limited edition release of 2500 units features striking art design by Jim Titus and exclusive, in-depth liner notes by film music writer Jeff Bond.