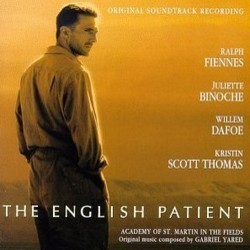 Show reviews in other languages
The English Patient - 06/10 - Review of Tom Daish, submitted at 2010-10-09 12:53:57
I was, it has to be said, fairly disappointed when Gabriel Yared's score was swept up in the general furore surrounding the much over rated English Patient. My guess is that the film's old fashioned romanticism and sprawling scenery cobbled with some passable acting were just what everyone was looking for that year. Unfortunately. OK, so it wasn't all that bad, but I'd be hard pushed to actually find either the score or film worthy of such a prestigious (or so we are told) award.

After the event, Yared's score seems even more the impostor it was the first time around. I always felt it to be a bit of a John Barry wannabe score; indeed many sections to owe some debt to Barry's style. Perhaps the most notable during Rupert Bear which I would have said was Barry scenery music if I didn't know better. Of course it still lacks some of Barry's idiosyncratic harmonies and is never quite so truly memorable (compare it with something like Out of Africa and Barry's skill as a melody writer and dramatist is self evident). Outside of a few bigger moments, the music often feels as incidental as it is. Well enough wrought and beautifully played by the Academy of St Martin in the Fields (not conducted by Sir Neville Mariner, but this time by Harry Rabinowitz), but somehow not really going anywhere and with the feeling that Ralph Feinnes ought to be looking dashing on screen for full effect.

Perhaps what makes the score so disappointing is listening to the better sections and realising how good it could have been. Rupert Bear is a nice track and Let Me Come In has a gentle mock fugue quality to it which gives it some musical focus. The short track lengths don't help to make the score more cohesive, but even when allowed time to expand such as Convento di Sant'Anna, Yared merely gives us nine minutes of pseudo classical solo piano. Nice, but a bit uninvolving. To pad out Yared's score, the album also contains some fairly ill placed period tunes. Nice though Berlin and Benny Goodman are, they do rather ruin Yared's admittedly well constructed atmosphere. The token piece of classical music that now graces many Classics from the Movies compilations is from Bach's Goldberg Variations which does fit quite well with Yared's score.

I suspect The English Patient will be the fame high point of Yared's career. He's actually composed some better scores since; The Talented Mr Ripley, also directed by Anthony Minghella, had some very memorable moments that were badly watered down by the poor album. However, The English Patient is a pleasant enough album and certainly of generous length, even considering the non Yared material. However, unless you're inclined toward this type of classical, subdued scoring, I suspect a bit of John Barry would be a much better listen.
Golden Globes: Best Original Score (Winner)
Oscars: Best Original Score (Winner)

Other releases of The English Patient (1996):