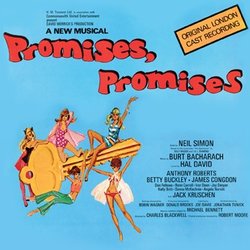 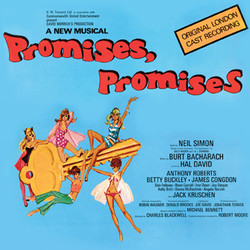 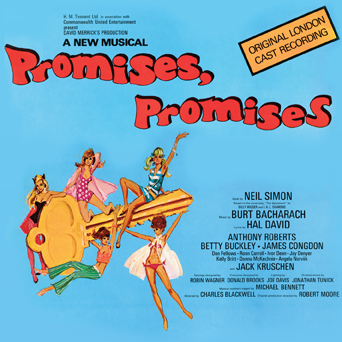 Yes, after our wham bang success with our two CD Promises, Promises Original Cast Album (which included the original LP mix on CD 1 and our newly remixed version with the pitch-corrected vocals), and the one CD re-pressing of the newly remixed version, we now present what is a Holy Grail for most cast album collectors: the Original London Cast Recording of Promises, Promises, starring Anthony Roberts, Betty Buckley, and Jack Kruschen (reprising the role he created in the film on which Promises is based  The Apartment  for which Kruschen received an Oscar nomination for Best Supporting Actor). The London production opened in 1969 and ran a very healthy 560 performances and was loved by both audiences and critics, just as the Broadway production was.

This is the first release of the Original London Cast Album, which has been mastered from the two-track album masters, which were in pristine condition. Its quite a different listening experience from the Broadway cast album, and equally fun in its own different way. There are some interesting adjustments in the orchestrations occasionally, and naturally the recording balances are completely different than the original cast recording. The cast is superb, with Buckley really socking home her numbers, and Roberts truly charming and lovable. And its great to have Kruschen in the role he created in the film of The Apartment. Weve put the songs back into show order, as they were heard on the Broadway and London stage.
After the joy of being able to present the original cast albums original LP mix on CD for the first time, as well as the newly mixed version with the pitch-corrected vocals, its an equally great pleasure to be able to finally present the London cast album, sounding better than ever.