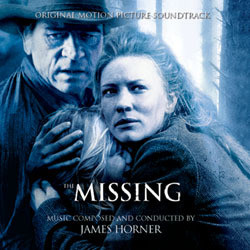 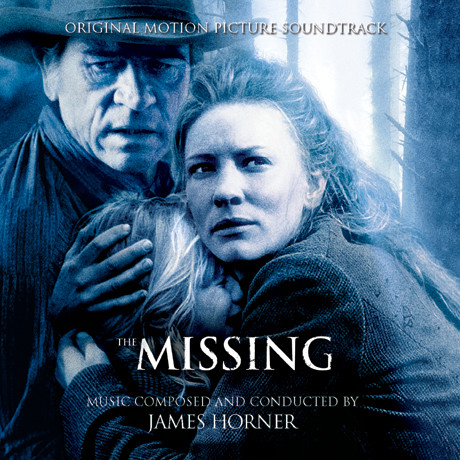 Hide reviews in other languages
The Missing - 08/10 - Review of Andreas Lindahl, submitted at 2008-01-20 21:25:40 (English)
Christmas comes early for fans of James Horner this year. Four soundtracks by one composer released within a couple of months is not something that happens a lot. Better enjoy it while it lasts, then. Which isn't that hard considering the high quality of Horner's output this fall. Beyond Borders, released the same week, is one of the most lovely scores of 2003, and one of the more interesting ones in Horner's career. And The Missing gives us music reminiscent of the composer's excellent scores from the 90's, such as Legends of the Fall and The Mask of Zorro. Horner's latest epic scores have ranged from rather good (The Four Feathers) to disappointing (Windtalkers) and it's therefore refreshing to see that the composer still knows how to do it.

The Missing, directed by Ron Howard and starring Tommy Lee Jones and Cate Blanchett, takes place in New Mexico towards the end of the 19th Century. It's a film which deals with a horrifying loss and the search of a kidnapped daughter and her kidnapper so Horner's score is pretty dark and dramatic. When it comes to scope and structure - and, to some degree, sound - it's possible to hear similarities with Legends of the Fall, composed back in 1994, but The Missing is a much more serious score and doesn't have the kind of simple block chords or the amount of over the top melodrama which made Legends of the Fall a great listen on CD, but at times a rather annoying element in the film (but it's worth mentioning that the kind of score Horner wrote for Legends of the Fall is the kind of score the sentimental film needed). It does, however, share the Native American influences and the broad, lush themes. Horner uses the shakuhachi in many cues - often as a rhytmic part of the ensemble, but also as a melodic instrument - and there are appearances of Native American chanting, similar to what the composer wrote for Thunderheart. And Legend of the Falls.

The Missing is a complex score and it takes time to really take it all in. It's dark, with a great deal of suspense and action which gets a little overbearing at times. Horner's current way to score action sequences is perhaps a little too noisy for my liking and I really missed the kind of action music he wrote for Titanic, the already mentioned Legends of the Fall and The Mask of Zorro. Similar to Beyond Borders, Horner uses synths to spice up the more ambient, underscore focused parts of the score.

The use of chairs as percussive instruments is actually less interesting than one might think. They're not that noticeable. Mostly because Horner uses them exactly like he uses the rest of his armada of percussion. They blend in rather well. A little too well, perhaps. What's the point in using chairs as instruments if the result isn't unique and refreshing?

Even if the themes are quite good, some of them are sometimes really close to quoting parts of previous Horner themes. They all sound a little familiar, and although it's not that easy to point out the source, this gets disturbing after a while. He never crosses the line, though, but it gets damn close a couple of times. The main theme is your typical sweeping Horner theme, first heard in the third track, "Dawn to Dusk; The Riderless Horse" performed by lush strings and ethnic flute. It's really quite beautiful and it shows up several times, joined by occasional orchestral swells. It also closes the CD in a wonderful, majestic version in "The Long Ride Home", which is one of those long finale and end credits cues Horner likes to do. Nice stuff and one of the best tracks on the soundtrack.

The Missing, judged by its score, is the kind of movie that Horner tend to overscore at times. Wall to wall music rarely works, in my opinion and there is actually such a thing as too much music. Sony Classical has, as usual, given us a long release - 77 minutes - and I'm wondering if it's not actually too long. It frankly gets a little boring at times and I find it hard to listen to the entire CD from start to finish. But skip a couple of underscore tracks and you have a really excellent, surprisingly dark and entertaining CD. It mostly sounds very familiar but The Missing is a good, solid score by James Horner. Four weak stars.
The Missing - 10/10 - Review of Anthony Aguilar, submitted at 2016-12-31 17:26:53 (English)
In the early 2000s, James Horner was on a dramatic scoring hot streak. His score for The Missing in 2003 came hot off the heels of such masterful scores as The Perfect Storm, A Beautiful Mind, Iris, The Four Feathers, and the experimental yet gorgeous Beyond Borders. The Missing represents the apex of that period of the early 2000s for Horner, bringing together all of his most wonderful musical qualities and dramatic sensibilities into one powerhouse of a score. The film from director Ron Howard (with whom Horner had a good working relationship at the time) tells a very modern revisionist old western tale of a single woman who is trying desperately to raise two young daughters in 19th century New Mexico when her estranged father suddenly re-enters her life and one of her daughters is kidnapped to be sold into sexual slavery in Mexico by a bunch of ritualistic, sadistic killers. It is essentially a long chase movie, a race against the clock to catch and find the killers before they reach the Mexican border. It is a tale of love lost, reconciliation, forgiveness, strength and perseverance. All of those characteristics are abundantly present in Horner's score.

The Missing being a Western, one might go into this thinking that they will be hearing the sort of swashbuckling, jovial music from Hollywood westerns of old. But Horner wisely avoided that type of clichéd writing in exchange for his own style of dramatic composition. He instead wrote a sweeping epic, dark and filled to the brim with gorgeous themes, long lines of suspense, and brilliant, pounding, breathtaking action. The main theme is first quoted in full in 'Dawn to Dusk; The Riderless Horse' and contains several hallmarks that clearly identify this as a Horner score. One of the potential drawbacks of this score is that there are quite a few moments where the avid Horner collector will be reminded of his past scores, specifically Legends of the Fall, of which The Missing could be considered a sister score. However, the strength of the material and the powerful role it plays in the film and on album render that point rather moot for me. That main theme is developed and mutated throughout the length of the score before being given one final beautiful, spectacular treatment in the 'The Long Ride Home'.

Several other themes abound in this score, including a minor-key theme of uncertainty first heard in 'Dawn To Dusk; The Riderless Horse' and oft-quoted throughout the score. The brujo is treated to some Thunderheart-style vocal chanting that opens the album in 'New Mexico, 1885' but is at its most powerful in the massive set-piece 'The Brujo's Storm'. Horner's style of action writing had grown by this time to be very dense and busy. In some scores this could prove to be a drawback, but in The Missing it is an exhilarating asset. Horner action scoring just doesn't get much more exciting and pulse-pounding than in the stupendous 'Rescue and Breakout', which while viewing the film made me fist-pump when one of the main themes receives a fantastic, victorious, pounding string and drum treatment. Horner's usage of chairs as percussive instruments remains an odd yet compelling choice of sound and gives the action music something extra while lending an incredibly unique aura to the more ethereal, suspenseful moments throughout the score.

The Missing represents Horner at his very best. Indeed, he would not reach these heights again until Wolf Totem in 2015, one of his very last scores. The way he bucked the western scoring trends of the day (either the old-fashioned swashbuckling type or the more modern minimalist type) in favor of a far more overtly dramatic approach is commendable. And the way it plays out both in film and on album is sublime. It's a surprisingly dark, weighty score for much of its runtime but that is what Horner did best and he excelled mightily here. I whole-heartedly recommend The Missing to every Horner collector and fan. It is a masterpiece in every sense of the word.
The Missing - 07/10 - Review of Tom Daish, submitted at 2010-09-26 19:49:55 (English)
I suspect some of you are as bored of reading my reviews of James Horner's recent scores as I am of writing them. Horner seems stuck in a stylistic rut at the moment and each score comes across as a variation on something else, so it's hard to find something interesting to say about them other than catalogue the list of soundalikes and bemoaning the length. While The Missing doesn't really do much to buck the trend in many regards, it is a far more satisfying work and pulls the string of Hornerisms together engagingly. I shall, of course, mention that The Missing is a long album, but the slack periods are far fewer here than previously - the abundance of a greater number of shorter tracks helps since there's no parade of ten to fifteen minute marathon string noodling sessions that make even scores as promising as The Four Feathers feel more drawn out and slack. Less really is more.
As others have commented, The Missing is something of a variant on Legends of the Fall with a pair of sweeping themes, shakuhatchi led action passages and a sprawling sense of the epic throughout. Where it loses points over its popular predecessor is for the weaker thematic material; Legends of the Fall contained several memorable melodies, but The Missing seems more content to keep things lower key, although this is no doubt a side effect of its grittier and less sentimental approach. As ever, the opening track isn't especially promising, with one of Horner's now obligatory fade in on a low end sustained note; the Horner equivalent of Bruckner's shimmering string figures that immediately sets the composer and the expectation that you're about to hear something long and portentous (although in fairness, Bruckner did it better).

Ostensibly a western, there are almost no traditional western score elements in The Missing and only the faux Native American vocals suggest any specific place. Horner resolutely sticks to underscoring the drama of the characters as people and less on their location or ethnicity. Panpipes and shakuhatchi make a number of appearances, although the vibe turns a little South American, not something that is apparent when Horner has used them previously. What drives The Missing above the recent Horner ebb and flow tedium is the feeling of structure within cues and the score as a whole. Horner might write ten or fifteen minute cues, but they are rarely a musically inspiring development of the melodic material, generally repetition and perhaps a little variation. Only the finale here is longer and by that point, a suite of the main ideas concludes things nicely. However, the brevity elsewhere allows for a concision which flows without rambling.